He thought his had exploded. It hadn't, yet.

Gallows humor is a tricky thing. Something about this event having happened in 1925 provides some emotional distance perhaps, but someone did die, and in a nasty mining accident. Working in mines is one of the most dangerous of human endeavours, and I can barely imagine what conditions were like in the mines of the Mother Lode in the 1920s before government regulations sought to make the mines safer. And given recent deaths in Utah coal mines, it seems that regulations have hardly made things safer when owners are greedy and unscrupulous. 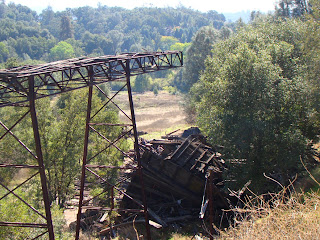 And yet, there is something kind of tragicomic in the descriptions I read today about how people died in accidents in the Kennedy Mine in Jackson, California. Not the way, or fact that they died, but in the matter-of-fact way in which the deaths were reported in the museum display:

"Set 47 holes at once. Lighting last fuse when first went off...Wasted time during lighting because fuses were wet." (1941)

The Kennedy Mine was one of the most important of the California Mother Lode mines, producing something like 1.5 million ounces of gold from 1860 to 1942, and when it closed, it was the deepest hardrock mine in the world, at 5,912 feet (mines in South Africa now reach more than 12,000 feet in depth). As it turns out, only 36 people died in accidents in the mine, although statistics do not record how many died due to diseases like silicosis from inhaling mine dust. It was a hard life, working underground. 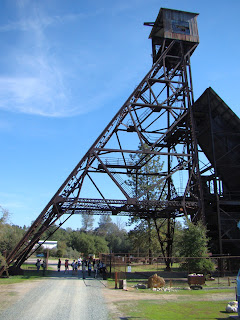 I learned these facts on a tour of the Kennedy Mine today, accompanied by a bunch of my students. It was my first time on the site, although I have observed the mine from a distance for many years. It was an interesting exploration, although it didn't include any underground aspects (this would be difficult considering the main mine opening is a vertical shaft hundreds of feet deep. Many of the buildings are still present, including a very impressive headframe 135 feet high. 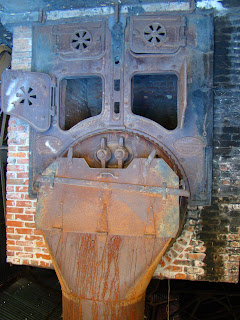 More on our interesting trip a bit later. In the meantime, does this furnace at the mine remind you of anyone?
Posted by Garry Hayes at 12:46 AM

I'd rather visit caves than mines. Must trust Mother Nature more than humans.

The boiler picture is upside down!! :)

Yeah, I did that on purpose; I thought it looked like Darth Vader that way....