California is Going to Fall into the Sea! Quiz Question #1

Thursday, while preparing for my public lecture on earthquakes and California, I blogged a short true-false quiz that I was going to present to my audience. We had a great time on Friday night, I think. 300 community members came out on a Friday night to see a science lecture! Anyway, here was the first of the questions:

California is going to fall into the sea: true or false?

This is one of those persistent statements about California earthquakes that everyone "knows", even if they live in New Jersey. I had a pretty savvy audience; they had a better than average understanding of earthquakes, and answered with the obvious answer: false.

I then offered up the correct answer: 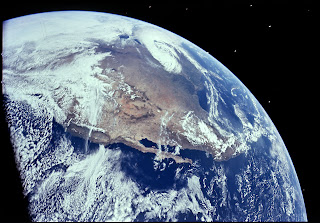 In fact, not only is it going to happen, it already has.

Check out the NASA photo above. When we speak of California, we often forget that most people are only thinking of one part of California: Alta California (upper California). The image above reminds us that Baja ("Lower") California is also part of our geography. And Baja has already fallen into the Pacific Ocean, in a reasonable interpretation of the statement. Baja was once connected to the Mexican mainland, and has been a peninsula for only the last four million years or so. It is the beginning of a massive rift that will ultimately tear Alta California apart, and send it traveling northwest at all of two inches a year. The two inches per year will actually be taken up by large earthquakes shifting the landscape 10-15 feet every century or so.

In 20 million years, the Dodgers and Giants will again be crosstown rivals (yes, I stole this joke from the DVD "Planet Earth"). In 70 million years, California may slam into the south margin of Alaska, pushing up another high mountain range.

Want to see how this happened? Tanya Atwater of UCSB, the plate tectonics pioneer who figured out the origin of the San Andreas fault, has a series of excellent animations available for download at this site. If you have a fast connection, try this one (50 mb).
If you have a slower connection, this animation is 20 mb. Both animations show the complex interactions of the continental margin, with some parts being rotated, and others moving northwest along the San Andreas. And Baja California opening up to form a new seaway, the Gulf of California.

So indeed, it could be a good idea to buy up some property in the western Mojave Desert to be ready for your oceanfront views...in ten million years...if you want to wait that long.

What? You thought the question was about California falling into the sea during one earthquake? Really? Like the movie 2012? Not gonna happen. That's tabloid stuff. Aliens kidnapped me last week too.
Posted by Garry Hayes at 1:16 AM

Excellent. I had a bio teacher who, when talking about the effects of the various ice ages, cold trends, hot trends, etc., advised us to "Buy real estate in Arizona" since CA was going by the wayside. Mind you, he said this from UC San Diego, perched atop the Pacific ocean. =)

I think California "sailing" into the ocean is more accurate than "falling" into it.

Perhaps, "North America is falling apart" would be the best way to put it.

And as you mentioned, Garry, in 60-70 MA, North America will put itself back together again! Of course, we'll have to change "Baja California" to "Baja Alaska"...