Vagabonding across the 39th Parallel: In the Former Realm of Glaciers...Part II, on Trail Ridge 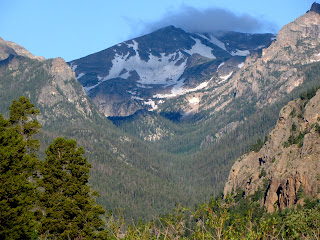 It was the morning of our last day of an all-too-short visit at Rocky Mountain National Park during our vagabonding journey across the 39th parallel. We were now turning towards home, with the intention of crossing the Continental Divide on Trail Ridge Road. It's one of the nation's most spectacular drives, on par with Tioga Pass and Tuolumne Meadows in Yosemite, the Beartooth Highway near Yellowstone National Park, or the Going to the Sun Highway in Glacier National Park. It was another day in the former realm of the glaciers, as we drove from the end of the Pleistocene ice rivers to their source at the Continental Divide.

We made a first stop at Moraine Park to see a non-thunderstorming valley (it had been a wild night in the rain). A turn towards the mountain crest (above) gave us a fine view of a u-shaped valley, and a hanging valley. Hanging valleys develop when a larger glacier cuts a deeper trough than a smaller tributary glacier. The valley floor of the smaller glacier sits at a much higher elevation, often resulting in waterfalls or cascades where the drainage enters the deeper valley. In the picture above, the hanging valley is on the upper right hand corner (click on the photo for a larger view). 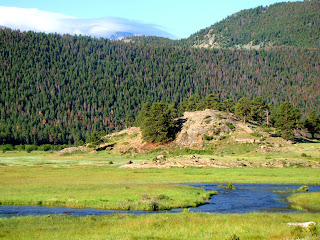 Rocky knobs in the middle of the valley that have been shaped by the grinding action of the ice are sometimes called roche moutonnées. The name refers to rock "mutton" or fleece (different sources disagree), presumably because the rocky outcrops looked like grazing sheep from a distance. The ice grinds and smooths one side of the rock, and plucks and tears at the other end, producing an asymmetrical outline.

The linear ridge in the picture above is one of the vast piles of debris left behind along the margins of the glacier that filled this valley, which is called Moraine Park. These ridges are called lateral moraines. A terminal moraine also once blocked the end of the valley, forming a shallow moraine lake. Over time the lake filled with sediment and evolved into the meadow we were strolling along. The picture below provides a perspective on the size of the lateral; it's big. 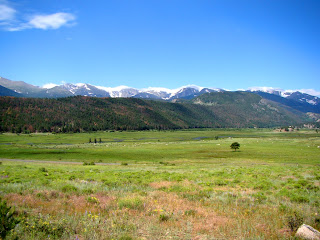 It was time to start up Trail Ridge, the premier park road that traverses the divide between Big Thompson Canyon and Fall River and crosses three passes, Iceberg, Fall River and Milner, to reach the headwaters of the Colorado River on the west side of the park. The road reaches 12,183 feet (3,713 meters). The route provides a bird's-eye view of the birthplace of the glaciers that scoured the high country.

From our first stop on the road, Many Parks Curve, we had a nice panorama of the lateral moraines we had just left in Moraine Park. The moraines surround the linear meadow in the center of the photo below. The park service website for Rocky Mountain has a marvelous interactive page on the glaciation of the park that offers this particular panorama with labels of the glacial features, and a view of this landscape as it would have appeared during the height of the ices ages. 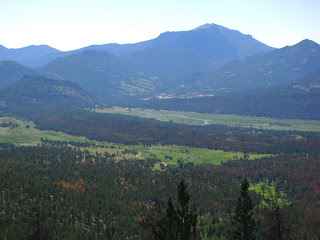 The road climbs relentlessly and we arrived at the next viewpoint, Rainbow Curve. In the distance on the flank of MacGregor Mountain we could see a feature that is often mistaken for a glacial feature, a group of exfoliation domes (below). It would be easy to imagine glaciers overriding and smoothing off the summit of these granite monoliths, but these peaks stood above the ice rivers. The rounded shape of the domes results from unloading, the expansion of the granite as erosion removes the heavy overlying rock. Cracks form parallel to the surface of the rock, causing corners and edges to fall away. 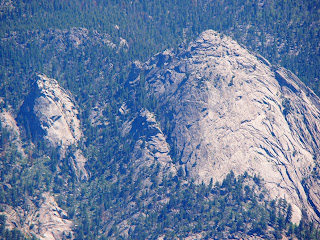 We were so high up now we might as well have been flying (see the photo below). Looking down we could see the other major glacial moraine complex at Horseshoe Park and the long winding switchbacks of Trail Ridge Road on the right. On the left side one can see the tan colored deposits of the "Alluvial Fan", which formed in 1982 when a poorly built earthen reservoir damming Lawn Lake gave way, pouring nearly 30 million gallons of water down the small side canyon. The surging waters filled Horseshoe Park for a time, and killed three people. 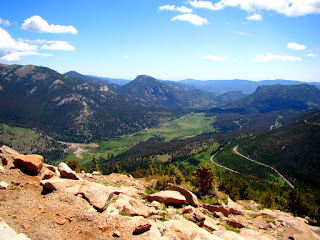 Like Moraine Park, Horseshoe Park was once a shallow lake dammed up behind the terminal moraine of the glacier. When the lake filled with sediment, Fall River flowed across a nearly level surface, and the water took a meandering course across the meadow complex. The meander loops are constantly changing as faster flows cause bank erosion on the outer edge of the loops (cutbanks), and deposition on the inside of the loop (point bar). The loops get larger and larger until they breach the meander neck and form a cutoff. 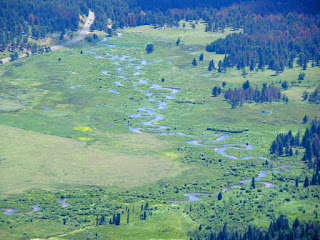 By the time we reached Forest Canyon overlook, we were truly in the land of glaciers. Looking across the canyon, we had an excellent view of the birthplace of a glacier, a curving bowl-shaped valley called a cirque. The cirque in the picture below is on the flank of Terra Tomah Mountain (12,718 feet; 3,876 meters). Cirques develop when enough snow falls on a yearly basis that some survives the summer melting. Year after year the snow accumulates into a permanent snowbank that has been compressed into solid ice. When the ice reaches sufficient thickness, it behaves plastically and starts to flow slowly away from cliffs, plucking out loose boulders and destabilizing the slopes above. Eventually the ice eats into the mountainside enough to form the bowl-shaped valley. 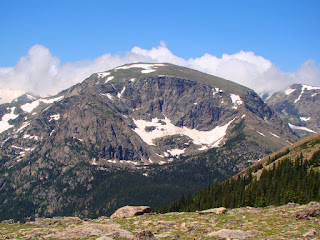 The snowbanks filling the bottom of the cirque in the picture above are not glaciers; the climate has been too warm these last few centuries to allow a glacier to persist at this elevation. Several small glaciers can be found in Rocky Mountain National Park, and we could see what looked like a small one tucked into a higher cirque in Hayden Canyon (below). The bouldery debris below the icefield can be considered a terminal moraine, although the ridged appearance of the rocks may indicate the presence of a rock glacier, a moving icefield that is more or less completely buried by rocks. The park service site mentioned previously offers an interactive interpretation of the sights seen from the Forest Canyon overlook. 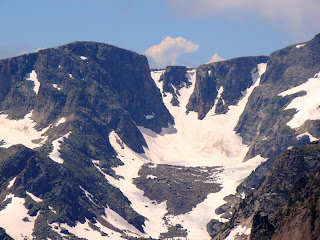 Glaciers in alpine environments tend to form extremely rugged terrain (as seen above), but Trail Ridge Road follows a long ridge with rather muted topography characterized by gentle slopes and swales that were never glaciated.  These boulder-strewn fields preserve a relict landscape of the terrain that existed before the ice age glaciers sculpted the ridges and valleys below. 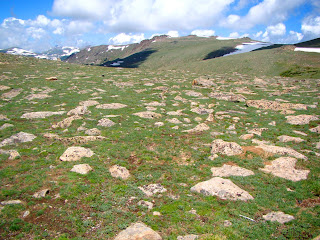 The conditions are fierce at this elevation, with extreme cold for most of the year, and occasional hurricane-force winds. Trees cannot survive here, the only vegetation being low perennials and grasses that can tolerate the short growing season. This kind of tundra environment is more characteristic of northern Canada and Alaska. 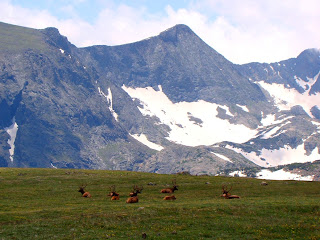 At the highest part of the road we passed a herd of elk relaxing in the sun. Once we crossed Milner Pass, we started descending into the Kawuneeche Valley, the headwaters of the Colorado River. A spectacular ridge forms the western side of the valley, the Never Summer Range. The Never Summers are composed in part of much younger plutonic (granitic) rocks than the ancient metamorphic rocks forming the core of the park. The rocks formed in Cenozoic time (25-30 million years ago) during a time of profound change in the American west. The San Andreas fault was beginning to develop, the Sierra Nevada were beginning to rise, and volcanism was sweeping across Nevada and Utah. 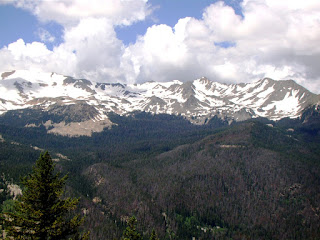 We were considering staying at park's other campground at Timber Creek, which seemed to have plenty of openings for some reason (we were able to stay the previous two nights on the east side only because of cancellations by others). We also noticed that although the views of the Never Summer Range were spectacular, something was terribly wrong with the forest. The trees were dead...everywhere. What happened here? That will be the subject of the next post...
Posted by Garry Hayes at 12:24 PM

WOW! The Rockies are Spectacular.

Sure hope you show the true headwaters of the Colorado River.