What is it like to be the first person to step into a newly discovered cavern? 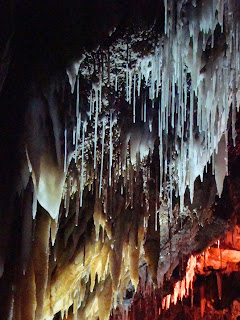 Actually, I don't know. I am not a hardcore caver who spends weekends crawling through poison oak and snake-infested outcrops looking for fist-sized openings in the limestone that might lead to undiscovered treasures beneath the surface of the earth (although I would love doing such a thing!).

But I do know that I am continually frustrated to wander through a cavern that has been overused and abused, frustrated that I can never see the various rooms in their pristine state, as they existed before human discovery. Tourist caves in the Sierra Nevada Mother Lode were mostly discovered in the middle and late 1800s. The early explorers carried smoking torches, and thought nothing of destroying delicate speleothems if it served their purposes (liking making underground dance halls and the like). Visitors regularly broke off stalactites to take home as souvenirs.

The outer reaches of California Caverns suffered this fate, as I described in my previous post. 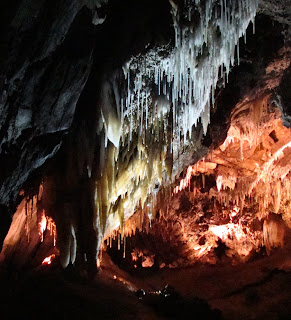 It turns out that the miners and early visitors never noticed the debris blocking an extremely narrow passageway in the rear wall of the Bridal Chamber in the most remote section of California Cavern. A few decades ago, explorers worked their way through the claustrophobic tunnel and emerged in a large space that came to be called the Jungle Room. It was full of the most delicate cave decorations imaginable. 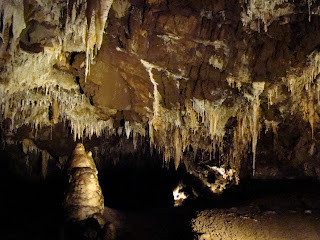 In the ensuing years, the passage was widened, and a trail constructed so the Jungle Room could be added to the public tour. Entering the Jungle Room is to see a pristine cave, one that is mostly untouched by the abuses that have marred many other caverns. Soda straws and helictites are two extremely delicate features that are invariably broken off by cave vandals. They are here in profusion. 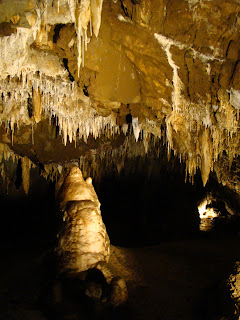 Soda straws are pretty much like their namesakes, thin stalactites with hollow interiors. Some that I could see were feet, rather than inches long. Helictites are essentially soda straws or stalactites on drugs; they have forgotten that they are supposed to be influenced by gravity. They develop in random directions, probably due to water seeping out under pressure through different openings, causing precipitation of calcite in odd directions. An example can be seen coming off the stalactite in the center of the picture below. 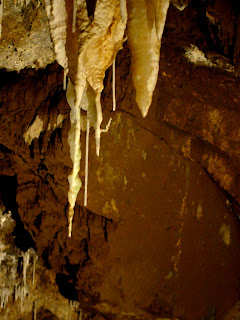 Every corner of the Jungle Room is a revelation...I could almost feel the joy that John Muir felt when he visited the caves before they had been so badly defaced:


Here we lingered and reveled, rejoicing to find so much music in stony silence, so much splendor in darkness, so many mansions in the depths of the mountains, buildings ever in process of construction, yet never finished, developing from perfection to perfection, profusion without overabundance; every particle visible or invisible in glorious motion, marching to the music of the spheres in a region regarded as the abode of eternal stillness and death. 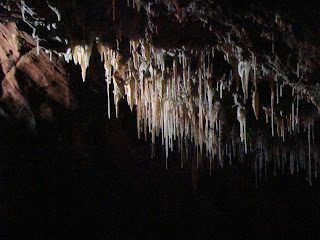 The cave is still active and many of the formations are dripping and streaming with water. 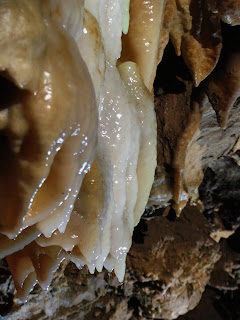 One of the stalagmites particularly stood out (below). Without the dirt of a century of misuse, the formations are pearly white in texture and appearance, and are simply stunning. The Jungle Room is a wonderful chance to feel, for a few moments, like you are the first person who has ever laid eyes on these treasures. It is well worth a visit. 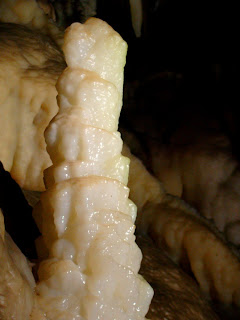 The discovery of the Jungle Room was just the beginning. More passageways led off from the depths of the new section of cave, and the total measured length of the cavern system now exceeds a mile. The company offers extended tours of the newer passageways, but I haven't yet had the privilege (it's a bit more expensive...). 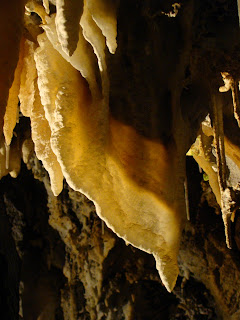 How very special to visit a pristine cave room. You should visit Karchner Caverns south of Tuscon which was discovered in the 70s and kept secret for a while before being developed by the State. The original footprints in mud are still visible. They did a Great job with the tour routes and the cave has more helictites than I've seen, plus awesome shields and soda straws every where.

Thanks for sharing these beauties.

Maybe you should take up caving. ;)