Fall in the Sierra Foothills 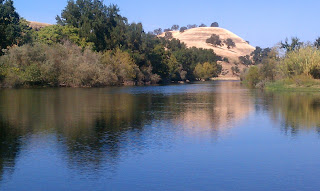 It's California, so the season "fall" doesn't always have the same panache that it might in the northeastern states or northern Rocky Mountains. It also comes a lot later. Except for the (somewhat) unusual inch of rain we had last week, these days would be largely indistinguishable from summer. Dry, dusty, and only a little bit cooler (highs in the eighties are expected this week).

Still, it did rain last week, so the air was cooler today, and there was a freshness we haven't felt in months. We took a little picnic this afternoon up the Tuolumne River into the Sierra Nevada foothills. We stopped at Old Basso Bridge, a river crossing that was once the focus of some rather intense gold dredging. Numerous ponds from the mining days dot the landscape, filled with groundwater. Today they provide habitat for wildlife, and a nice recreational area for fishing and wildlife photography. 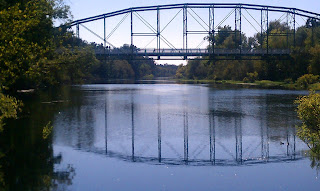 The old Basso Bridge was replaced with a sleek modern concrete edifice that dominates the view from the boat ramp, but a short walk provides a view downstream towards the old bridge (which is closed to autos, but available for pedestrian use). 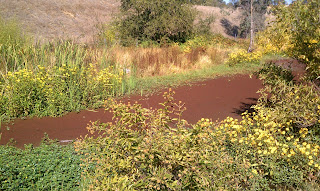 The old dredge ponds provide a surprising sight for this time of year: lots of flowers. There were hundreds of what looked like Brown-Eyed Susans.

The other interesting sight at the park are the boulders they've used for rip rap to reinforce the base of the bridge. They are chunks of a deeply oxidized conglomerate that is found locally in a layer called the Ione formation. It formed in Paleogene time as rivers flowed over the not-quite risen Sierra Nevada. The rivers had their source in central Nevada or more distant regions, and flowed through a landscape much different than that of today.

The rivers ended in an estuary/delta complex along the Pacific Ocean (the Central Valley was a shallow sea at the time), and in a series of swamplands that later produced lignite coal that was utilized during the settlement of California after the Gold Rush. Fossils of palms and other warm weather vegetation indicate tropical conditions. 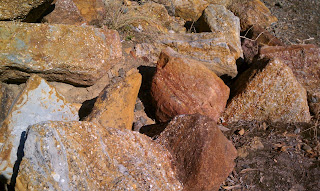 The conglomerates also contained significant amounts of gold (hence the local dredging activity). There were a couple of guys panning gold today, and they actually had come up with 20 or 30 pinhead-sized flakes.

Fall is just beginning. I'm looking forward to some color (of the leafy kind) in the next few weeks!
Posted by Garry Hayes at 4:54 PM

Love the whole La Grange area. So historic and beautiful. There are a few (blasted out) caves east of the bridge that I used to explore with friends when I was a lot younger. Have you hit the Tuolumne Dredge yet? Drove by it with my wife a few years back when I was showing her the area. I was really glad to see someone finally made it a State Historic Landmark.

Looks like a great place to visit. Nice reflection from the old bridge. Wasn't sure CA did fall. ;)