In California, We Are Waiting for the BIG ONE! True or false? What everyone "knows" about earthquakes

We've reached the end of our seven question quiz on what everyone "knows" about California earthquakes, things which may be true or maybe aren't. These questions were the basis of a community lecture I gave a few weeks ago. The last two questions concerned the ability of psychics and animals to predict earthquakes, and yes, psychics are frauds when it comes to earthquake prediction, and we can't sense the world the way animals do, so basically, it is impossible to predict earthquakes in the kind of timely manner that will allow people to take cover or leave town. We just can't do that, not yet.

But there is still that nagging statement that you hear all the time in California. It's today's true-false question:

In California, we are waiting for the BIG ONE! True or False??

When I was on stage at the lecture, I made sure to say "the BIG ONE" in capital letters. How do you say something in capital letters? You do it in a deep baritone voice with your hand cupping the microphone; it's very dramatic.

So what is the answer? Well, actually the question is wrong and requires a bit of modification. Let's try it again, and in that deep baritone voice:

In California, we are waiting for the BIG ONES!

Predicting earthquakes is not possible in the short term, as in hours or days, but a great deal can be said about the probability of earthquakes in a particular area over a period of decades. We can do this on the basis of the historical and prehistorical record of earthquakes along a particular fault zone, and by analysis of building stresses and tilting over a large region, as revealed by GPS stations and other related technology Check out the methodology of the 2007 Working Group on California Earthquake Probabilities in this USGS PDF file. 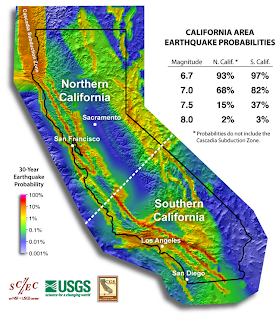 As can be found on the map above, numerous fault zones represent a threat to the state of California. The fault zones are of different lengths, and therefore some will produce smaller quakes, but several are capable of producing large shocks approaching magnitude 7, and maybe even larger. These include the San Jacinto fault, the Owens Valley fault, the Hayward and Calaveras faults, and others. Even more important is the fact that the San Andreas itself is not a single monolithic fault zone. It has segments that behave independently. This was shown in 1857 and 1906, when completely different sections of the fault gave way, producing shocks that approached magnitude 8.

The most recently published studies show that earthquakes of 6.7 magnitude or greater are a virtual certainty over the next 30 years. The chance for an even greater quake is ominous, exceeding 70% for a magnitude 7.0, and a lesser, but still significant chance of even larger events. In a way, one of these quakes has already occurred, even though it was just south of the state: the El Mayor-Cucapah quake this year in northern Baja California was a magnitude 7.2 event.

Another wild card is the possibility of a large quake along the Cascadia subduction zone in the northernmost part of the state. It was not included in the probabilities, but numerous magnitude 7 quakes have taken place in that region in recent decades. 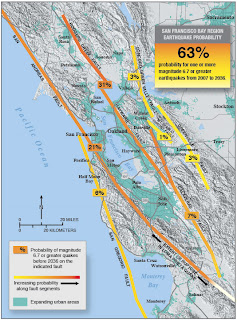 The lesson to be drawn from these predictions is that damaging earthquakes have happened all over California, and they will continue to do so in the future. Some of these quakes will be major events, causing many deaths and massive damage over large areas. The probability forecasts have great value in the sense that they are a warning to residents across the the state to be prepared at all times for earthquakes. We cannot know the precise moment that a large earthquake will strike, but we do know where they will happen, and how big they can be.﻿
﻿
Posted by Garry Hayes at 11:38 PM

Husband and I are building a house in the northern part of Walker Lane -- about 15 miles south of Walker, actually -- and have had numerous discussions with our building designer over earthquake safety. He thinks we're crazy to worry about it. We beg to disagree. The mountains and valleys just east of the Sierra have all kinds of faults, and some of those have barely been mapped, let alone assessed.

Hi Karen...it's funny you mention the Walker Lane and the town of Walker. My in-laws lived there for 15 years, and I did my master's thesis, mapping the faults! And given the quality of my thesis, you are right: barely mapped...