A Tale of Two Slides: Mass Wasting in the Yosemite Region 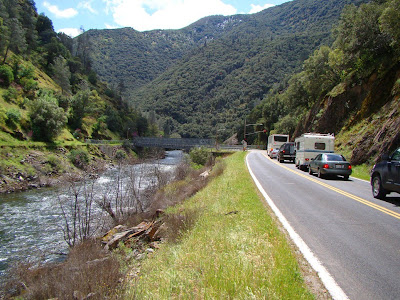 First-time visitors to Yosemite Valley who enter the park via Highway 140 from Mariposa are treated with views of a spectacular river canyon along with sights of some interesting ongoing geological processes. One of the odd places along the drive is a stoplight in the middle of the highway near Savage's Trading Post, and a narrow bridge that only allows one-way traffic. After a wait of several minutes, the light changes and traffic crosses the river, only to cross over another narrow bridge a short distance later. What's going on? 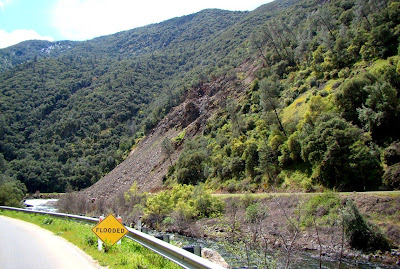 The reason becomes clear when one looks across the river. A vast pile of rock covers the old stretch of highway, and the slope above the debris looks not so stable, with big chunks of rock that seem to be taking aim at the river. This is the Ferguson Slide, one of the real headaches for engineers who designed the highway. The present mess dates to 2006, but the slope had been a problem for years. One of my former students who worked for CalTrans kept me posted about the "next thing" they were trying to keep the slope from collapsing onto the highway. It appears that the rock moved as a semi-coherent mass, termed a slump. I think of such slides as mimicking what I do when I hit a recliner at the end of a long day; I slide down into the chair until friction keeps me from moving further. Also, I am usually semi-coherent at that point.

Welcome to the process of mass wasting, the downhill movement of rocks and debris under the influence of gravity. Rivers get a lot of credit for eroding the landscape, but they only cover a very small percentage of the land. Mass wasting processes move material down slopes to where rivers can carry it away. Downcutting rivers steepen slopes, but gravity moves the rocks into the rivers.

The Ferguson Slide is just one example of a problem area along the river. Almost every time I drive the highway, boulders and cobbles from the overlying slopes are littered across the highway. The rocks are ancient volcanic and sedimentary rocks that have been metamorphosed and deformed by compressional forces in the crust related to the subduction zone that once existed in Central California. The rocks are cracked and fissured and are naturally unstable on the steep slopes of the deep canyon. There are few flat places on the valley floor near the river, so roadcuts contribute to the instability of the slopes. 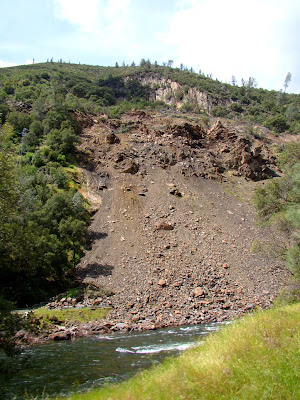 The Ferguson Slide has been active for years, as the scarp at the top of the slide is thousands of years old. There were (and still are) fears that the slope could completely fail, and that a large mass could block the river forming a dam and lake that could inundate developments upstream, and block traffic for years. 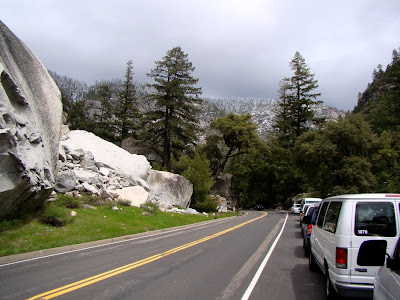 A mass wasting event of a different sort is revealed along the highway shortly after entering the national park. In this area the metamorphic rock has been replaced by the more familiar granitic rock the typifies most bedrock exposures in the park. Huge boulders choke the riverbed, boulders far larger than the river could ever move. Glaciers can move such rocks, but glaciers haven't been in this particular area for more than 700,000 years. These rocks have no lichens or stains at all; they broke from the local cliffs much more recently. In 1982, to be exact. 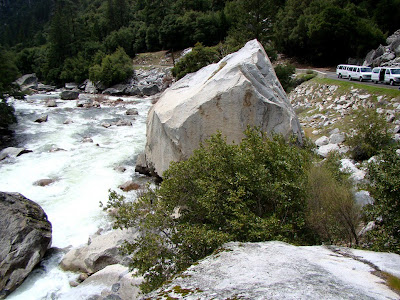 The Cookie Slide covered Highway 140 for months, and broke the main sewer line that served Yosemite Valley (the river wasn't such a nice place to swim for awhile). Granite is a very solid rock, and can form cliffs thousands of feet high (the vast cliffs of Yosemite being an example). But on their way to being exposed at the earth's surface by erosion, the rocks expand from the pressure release, and form cracks and fractures called joints. The joints provide an avenue for water to move through the rock, and also provide a surface for slope failures. The rocks detached from the cliff, broke up into a chaotic mass and tumbled and slid down into the canyon. 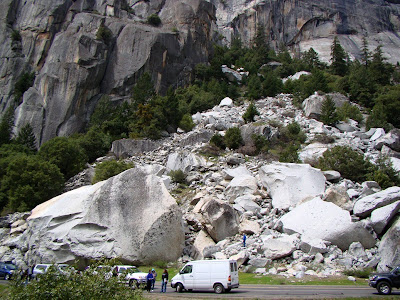 Rock falls and slides are a common occurrence in Yosemite National Park and the surrounding region. These are just two examples, but many more can be found with a bit of research and observation. In my travels, I have heard numerous rocks falling, and witnessed two larger rockfalls (which were described in an earlier post here and here).

Enjoyed the recliner analogy...can relate to the semi-coherent part :)