Spring in the Sierra Nevada: Some of Yosemite Valley's High Waterfalls 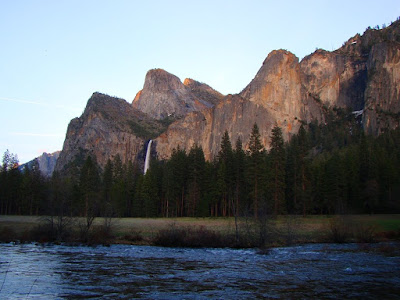 Yosemite Valley is justly famous for its beautiful waterfalls, and literally billions of pictures have been taken of them over the years (and that's just counting me). Bridalveil Fall (above) is one of the most visible and popular. During the spring runoff the falls run fast and cold and are the main reason most people are visiting Yosemite right now. It's too early for the flowers, and the high country is still wrapped in a deep, almost record-breaking blanket of snow. Although the eyes are drawn to the famous and familiar falls, springtime is a good time to see some of the less famous ephemeral falls that in any other place would be the center of attention. This last weekend, after chasing down rockfalls in the Midpines area, we made it to Yosemite Valley. This particular day I was able to discover a new thousand-foot high waterfall for the first time, and I caught another of my favorites from a new angle. 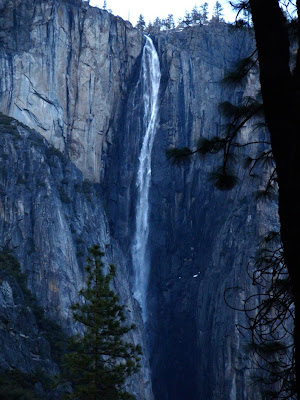 As noted a few posts ago, the highest single drop in Yosemite Valley is not Upper Yosemite Fall (1,430 feet), but is instead Ribbon Fall (1,612 feet) just west of El Capitan (above). It is usually viewed from the valley road near Bridalveil, but when I pulled out at Valley View at dusk, I saw it from a different perspective. There are a lot of trees that tend to block the view, but you can get a clear shot from...er...the middle of the busy highway. Needless to say, it is a stupid way to get a shot... 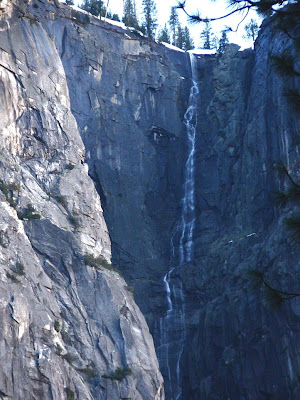 While I was standing...er...in the middle of the highway, I realized I had a fine view of a fall I had not noticed on previous trips...it is informally called Widow's Tears, and it drops over 1,000 feet down a series of ledges. There is some confusion about the name. As Mike Osborne reports in Granite, Water and Light, the name Widow's Tears once graced what is today Silver Strand Falls. The name was officially set aside in the 1920's, but in the 1970's ice climbers gave the name to this ephemeral cascade in the alcove just to the east. The northern shady exposure provides some excellent winter climbing opportunities. 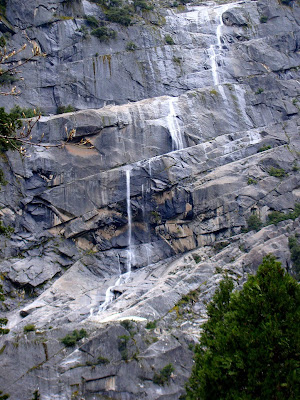 If you ever sit down for a pizza in the plaza at Curry Village in springtime, be sure to look at the cliffs below Glacier Point for a view of one of Yosemite's really unique ephemeral waterfalls, Staircase Falls. The rocks have a prominent set of diagonal joints that force the water to fall over a series of ledges that cause the waterfall to go sideways around 1,000 feet while falling about 1,300 feet vertically. 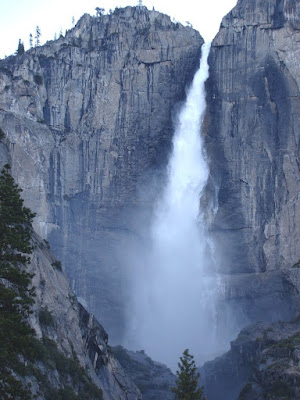 Lest you think that I totally ignored the famous waterfalls, I most certainly did make a stop at the base of Yosemite Falls to catch the spray. The falls were booming away, but as I watched the beautiful spectacle, I realized it has been a rather cold spring. Most of the snow is still up there in the high country, and when the warm days come, these waterfalls are going to get even bigger. The temptation will be hard to resist, so expect a few more on-site reports in the next few weeks!
Posted by Garry Hayes at 11:41 PM

If you want to see some of the falls from a great perspective, I recommend the Pohono Trail on the South Rim. Excellent views and great camping. Camp right above the brink of an (I think) unnamed fall at Stanford Point, and watch Silver Strand falls plunge over the brink to your west. It's spectacular.