A Fool for Fiddlenecks and Lover of Lupines 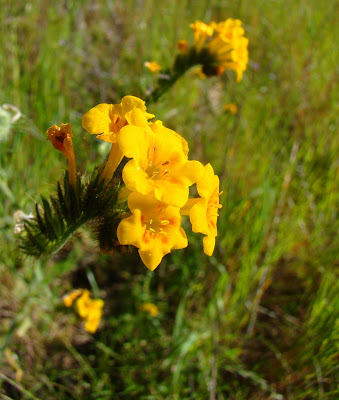 Not very geological, I suppose, but sometimes my travels and interests spill over into the biological realm. Part of the fun of springtime in the Sierra Nevada is the profusion of flowers that emerge for a couple of weeks. It doesn't take long before they dry out and lay down seed for next year, but the geography keeps the show going all summer. The Sierra mountain block rises gently to the east, and as conditions dry out in the foothills, the snow is only starting to melt in the high country. There are flowers to be seen somewhere in the mountains all summer long. 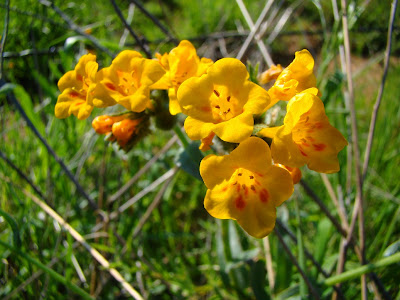 One of my early-season favorites are the Fiddlenecks in the genus Amsinckia, a small flower that blooms especially well along roadsides and disturbed surfaces in the foothills. There are around a dozen species across the American West. They're poisonous to livestock and considered a weed by some, but parts of some species were utilized by Native Americans for food and medicinal purposes. 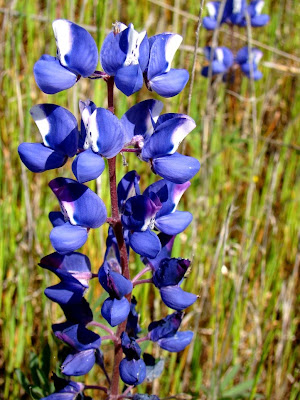 One of my other favorites is the Lupine (genus Lupinus), which grows at many elevations in the Sierra, and for that matter throughout much of the world (there are hundreds of species). Like the Fiddlenecks, it is poisonous to cattle and can sometimes be considered a noxious weed. On the other hand, some species produce a nutritious edible seed and are considered an alternative to soy beans. They also fix nitrogen in the soil, allowing other species to colonize. 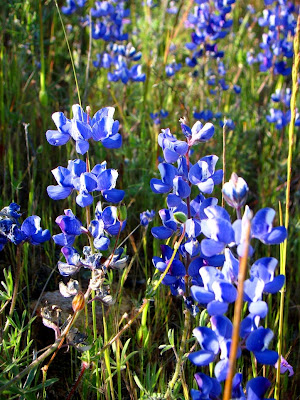 The other pretty flower I noticed in this early part of the spring bloom was the one below, but I don't know what it is. Any of my flower-expert readers gonna tell me? Some kind of Brodiaea? 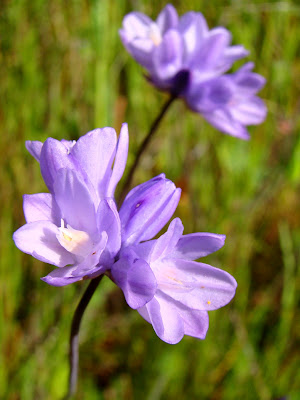 Not so familiar with fiddlenecks, but for sure a lover of lupines! :)

Looks like Brodiaea. A native of the region with a starchy, slighly oniony corm.

The common blue dick to be sure. I use the great "Wildflowers of the Sierra Nevada and Central Valley" by Laird R. Blackwell. It's got the best photos I've seen a field guide AND seperates the flowers by color and elevation for the non-botanist types like myself.

I see you have been informed. It was once classified as a Brodea but was changed about 40 years ago : Dichelostemma capitatum (common name. Blue Dicks.)