Another View of Spring in California: the Central Valley and the Diablo Range 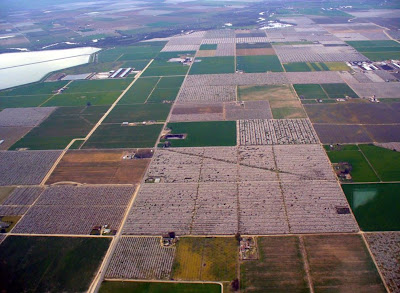 I often use this blog to discuss the interesting and strange elements of California's geologic story, and I try to emphasize the beautiful and spectacular, but I don't seem to talk as much about my home ground, the Central Valley (or the Great Valley, when we're feeling proud). It is flat, exceedingly flat, so flat as to not vary more than a few dozen feet over its 400 mile length (with the exception of the Sutter Buttes), and for much of the year it is dry, hot and dusty. During a few months in the winter we can't even see it, as the valley is socked in with the legendary Tule Fogs. For those interested in learning and seeing the natural landscape, well, there's not much of that in our valley. Only about 5% of the land surface looks at all like it did before European contact. Agricultural fields and cities cover most of the landscape.
On the other hand, there are two seasons I really like out here. In the fall before the fogs, the trees can be so very colorful as the leaves turn. And in spring, the blossoming orchards can be a beautiful sight. A couple of pictures came my way recently that provided a nice overview of the springtime in the valley and adjacent Diablo Range in the eastern Coast Ranges. Many thanks to photographer Ed Dwyer, and pilot Allan Ramsay who made these shots available to me. 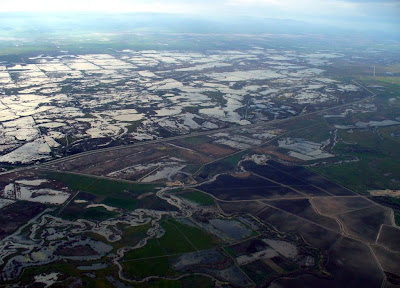 The picture above shows some of the water accumulating in ponds at the San Luis Wildlife Refuge, which includes the notorious Kesterson Reservoir. The shales of the Diablo Range contain high levels of selenium, which forms soluble compounds that can flow onto the valley floor and accumulate in the soils. A shallow hardpan layer causes a perched water table in some areas, and when such fields are irrigated, the soluble material can be concentrated close to the surface where the selenium and salts interfere with plant growth and agricultural yields. In the early 1970s farmers dealt with the problem by flooding their fields, dissolving the salts, and sending the runoff into a canal that distributed the wastewater into ponds at what would eventually become the Kesterson Wildlife Refuge.
Things went fine at first when only fresh water was delivered. A variety of fish and birds utilized the ponds, but after a few years most of the water deliveries were brackish, and animals started producing deformed offspring, and others died out. The reason was not apparent until analysis indicated extremely high levels of selenium. Cattle on nearby ranches were also affected.
Ultimately the wildlife disaster forced authorities to close the reservoir and fill it with clean soils. The problem has not been solved, and today most of the wastewater ends up in the San Joaquin River where it is at least somewhat diluted.
Luckily, other parts of the San Luis National Wildlife Refuge are not contaminated, and the region is utilized as a wetlands environment that supports thousands of migratory birds and other animals. 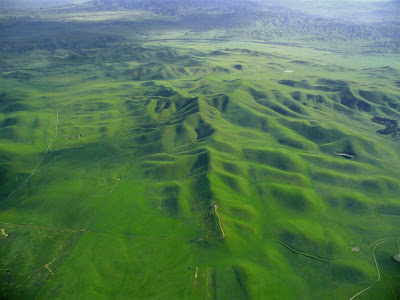 For those who are curious about the rocks that lie beneath the Great Valley, they can actually walk through the rocks without tunneling or drilling. The rocks have been twisted to nearly vertical outcrops in the eastern flank of the Diablo Range, seen in the picture above. The rocks are collectively called the Great Valley Group, and include around 20,000 feet of mostly sands and siltstones of Cretaceous age. The Cretaceous Period was part of the reign of the dinosaurs, but only a few bone fragments of dinos are found here; the sediments accumulated in a shallow sea where the dinos didn't live. On the other hand, the rocks have been a good place for finding remains of plesiosaurs and mosasaurs, large reptilian predators adapted to life in the sea. 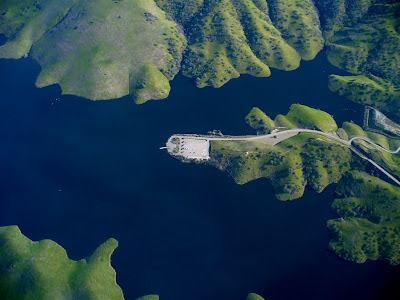 San Luis Reservoir is a water storage facility for the California Water Project, and is the largest off-stream reservoir in the United States (it doesn't receive significant water from the local watershed, but is supplied by the CWP canal system instead). The surrounding rocks are a chaotic mix of shale, graywacke sandstone, basalt, chert and limestone that accumulated in the accretionary wedge of the huge subduction zone that once lay off the coast of California. 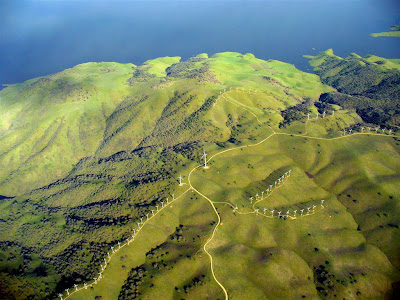 Pacheco Pass is a low break in the range that funnels coastal winds, so the hills are utilized as a wind farm, providing California with some renewable energy sources.
Thanks again to Ed and Allan for allowing the use of these pictures, and to Sarah Mesenhimer-Johnson for sending them along to me!
Posted by Garry Hayes at 11:22 PM

Thanks for the post, Garry. I was fortunate to see some of your countryside on my trip to Point Reyes last month.

Very interesting, too, about the water issues with the Kesterson Wildlife Refuge - a classic example of "what we don't know WILL hurt us."

These views of the Valley put it in a different perspective. When I drive through there I'm always bored now I'll remember this and it will be better.

I accept your statement that the valley is socked in for "a few months" as dramatic hyperbole. But do you really have significant periods of fog? I spent my first 20 years just north of Sacramento, then 20 years in So-Cal, and have lived just west of Sacramento for nearly 20 years. It is very much my impression that fog is much less common than it was 20 years ago and is noticeably less over nearly 20 years of daily commutes across the Yolo Bypass.

Hi Tom! Hyperbole, yes, but I have also noticed that the fog has been less in recent years. I've been here for 22 years, and I think part of the reason for less fog is related to the two droughts, in the 1990's and in the last 3 years, which result in a lot less foggy days (the ground has to be damp and cold). I also wonder if higher temperatures have something to do with it. I remember a number of terrifying nights driving between Merced and Modesto when I literally couldn't see more than a few feet ahead of the car, and I just haven't had as many of those the last few years.

Good to see that renewable energy is still growing strong in Cali. Just read a NY Times article that mentioned Cali's installed solar capacity is just shy of 1 GW. Keep going, because it seems that your states actions towards self-sufficiency is my provinces only hope of not damaging our ecology.