Rockslide on Highway 140 Near Yosemite (Video)

Headed up to Yosemite Valley today to see some waterfalls and enjoy the holiday. Had a wonderful time, but had an extra surprise. Got to see a modest rockslide on Highway 140 on our way there, and managed to catch it on video! We were driving down Highway 140 near Midpines on our way down to the Merced River when the new rockslide caught my attention. A lot of rock had already fallen, and given that there was a bulldozer parked on the other side, it was clear that the main event had happened a day or two earlier, but I decided I wanted a picture so we stopped and I hopped out. 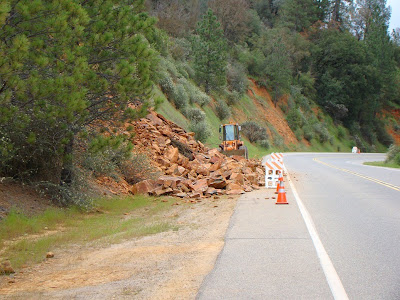 As I approached the slide, I could see a couple of large boulders still perched near the top of the roadcut that looked unstable, and I could hear small pebbles bouncing down the slope. When I got closer, I realized the pebbles and cobbles were dropping out from under the larger boulders. The rock was slowly giving way and I had a suspicion (and yes, a secret hope) that it might be about to collapse. I moved the camera setting to video, and only a minute later I got lucky. I was standing across the highway, and luckily no cars were passing at the moment. A couple of the broken chunks landed on the highway 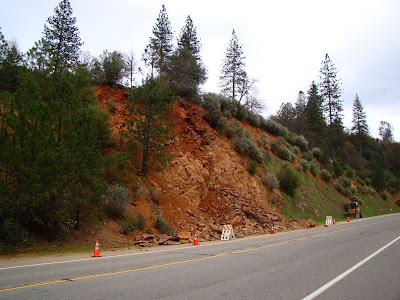 The picture above is the only shot I got before the slide. The rocks on the lower part of the roadcut are probably greenstones, metamorphic volcanic rock, while the unstable material above is metamorphic slate. Both are part of the late Paleozoic Calaveras Complex or Sullivan Terrane. The material was deeply weathered (thus the red coloration), which contributed to the slope instability. Further instability was introduced by having a roadcut in the first place, which oversteepened the slope, and by the tremendous amount of precipitation we've had this year, around 150% of normal. There were numerous other examples of recent slope failures along the entire Highway from Mariposa to the entrance of Yosemite National Park. 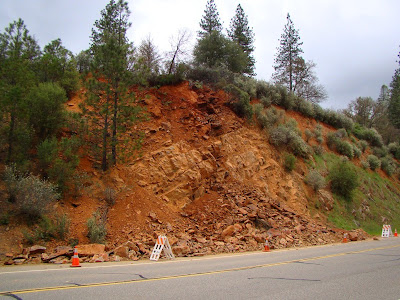 Sure, it wasn't the biggest slide in the world, but it was very loud, and it was very cool to be standing in front of it when it happened. You can hear me starting to say "I'm O.K." at the end of the recording, mainly because my wife was down the road a bit and heard the rocks drop, but couldn't see me.
Posted by Garry Hayes at 11:04 PM

Spring time in the mountains...new leafs, flowers and lots of mass wasting

You even got sound! Really, that was pretty cool. For as many of those as I've driven by, I've never caught one on video.