What Waterfall in Yosemite Valley is the Tallest? The Answer May Surprise You

A few days ago I posted a quiz on Yosemite waterfalls. I didn't get much feedback, but it seems only fair to post the answers and add in a few tidbits of trivia about them, not the least of which is figuring out which fall is the tallest. Yosemite is a unique place, and it has a stunning richness of waterfalls in the springtime. Some of them are below...(along with the answers to our pop quiz) 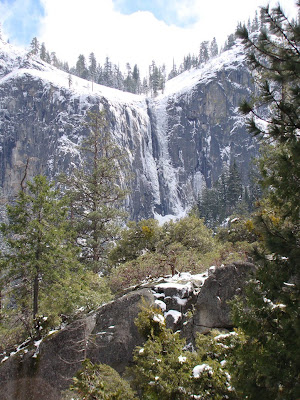 Number one: Silver Strand Fall is 524 feet high, and gets missed much of the time because it is mainly visible from the famous Wawona Tunnel View, but everyone there looks at the panorama of Yosemite Valley, and they don't look high on the cliffs to their right. When I was there last week it was actually an ice fall, with barely a trickle of liquid. It flows pretty well in the spring, but dries quickly in the summer. 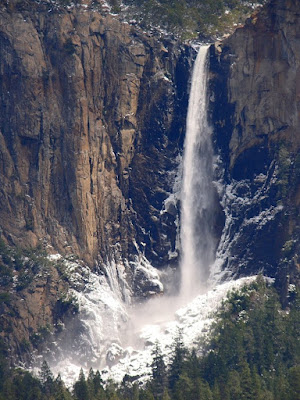 Number two: This one wasn't too hard, except that I purposely hid the dramatic cliffs that surround it and the snow and frazil around the base was unfamiliar looking, at least to me. It is Bridalveil Fall, 620 feet, which is the one visible from Tunnel View, falling from a valley along the Cathedral Rocks. It flows for much of the year, but late in the season the lightest breeze sends the water droplets flying everywhere but down. 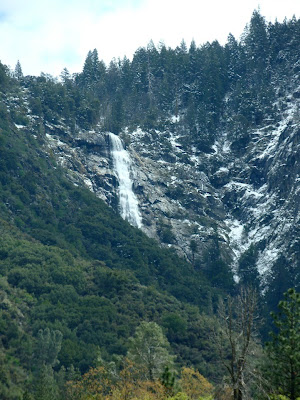 Number three: I'm not sure this cascade even has a name. It is visible from the El Portal area, and I think it lies on Indian Creek, so we'll call it Indian Creek Falls (I'm open to corrections, locals!). When driving up Highway 140 up the Merced River Canyon, it is one of the first waterfalls you will see, but it is only obvious during the spring runoff. 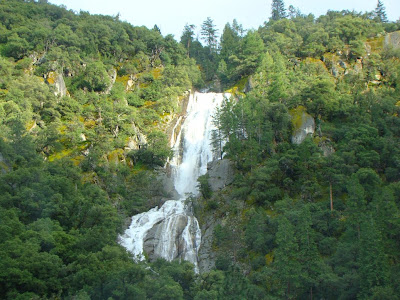 Number four: Grouse Creek Falls (about 200 feet) is also visible (briefly) from along Highway 140 downstream of Yosemite Valley. I usually approach the Valley by way of 140, but I usually leave by other routes. Last week we had to leave along 140, and since I wasn't gabbing over the radio (it would have awakened my slumbering students), I noticed these falls pretty much for the first time. It's the first time I've photographed them, anyway. 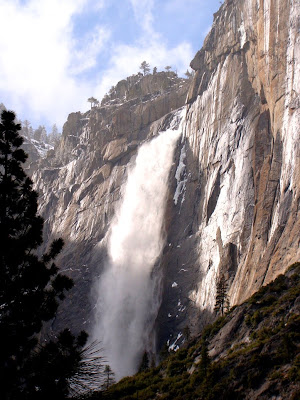 Number five: Upper Yosemite Falls (1,430 feet) is the highest of the three sections of Yosemite Falls, which with a total drop of 2,425 feet is somewhere around the fifth to seventh highest waterfall in the world. This shot is from the slightly less familiar angle of Yosemite Village, and does not show the full extent of the drop. Waterfalls are measured in a number of different ways, and if one holds the height of a fall to be a single drop along a single cliff, Yosemite Falls is not the tallest waterfall in Yosemite Valley! The tallest will be revealed below... 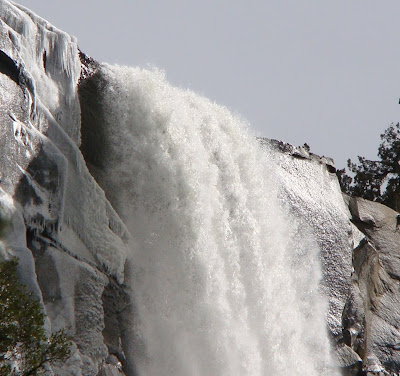 Number six: It's not this one, though. I tucked in a close-up of the brink of Bridalveil Fall with icicles along the cliff. It was a really cold day! 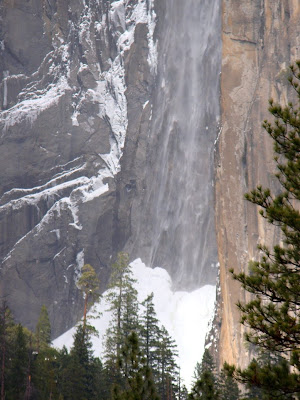 Number seven: This is the base of the tallest water fall in Yosemite Valley. It is called Ribbon Fall, which at 1,612 feet is taller than Upper Yosemite Fall. It's not that it is hard to see. It's right next to El Capitan. The problem is that the watershed feeding the fall is relatively small, and the fall tends to dry up quickly in the spring and early summer, so most park visitors don't see it. 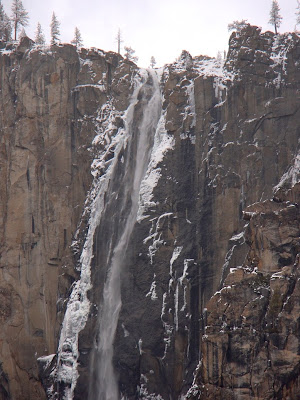 Number eight: Here is the top of Ribbon Fall. It is a dramatic drop! I was curious about whether people have bushwhacked their way to the base of the falls and snapped shots from there. Yosemite photographer Edie Howe (View From the Little Red Tent) pointed out to me that the cover image of the book Granite, Water and Light: The Waterfalls of Yosemite Valley by Mike Osborne is just such a picture. I had just purchased the book last year, and found it to be an excellent (and beautiful) introduction to the familiar and not-so-familiar waterfalls in Yosemite Valley. I recommend both it, and Edie's photography site.

Yosemite Valley has such a richness of waterfalls that I could actually put up another quiz with eight waterfalls that aren't pictured yet. It's a wonderful place to visit in the spring (oh, and in the summer, fall, and winter).
Posted by Garry Hayes at 10:45 AM

One fall you missed, though it's not really in the valley, is Snow Creek falls. Depending on how you slice your falls, this is one of the highest falls in Yosemite, though like many others, it has a short life span. By July, it'll be gone most years, or merely a trickle. Not to mention, there are only a few places one can really see it, Half Dome being the most famous view point.

I know of Snow Creek Falls, but I haven't had the privilege of seeing them yet. I guess that will be yet another good excuse for running up there!

Photo #3 is of Chinquapin Fall, located on the south canyon wall above the town of El Portal. You are correct--it is on Indian Creek. And thanks for the kind comments on my book, "Granite, Water & Light: The Waterfalls of Yosemite Valley.

I was at Yosemite in spring 2001 and I thought Bridalveil Falls (am I getting the name right?) was the tallest. Of course, I didn't get to stay and explore as long as I wanted to -- we had only two nights and a day there. I wish I'd known of a blog like this back then -- I'd have known what to look up. It's always lovely to enjoy Yosemite virtually again, though.