What Does An Urban Small Stream Flood Advisory Flood Look Like? 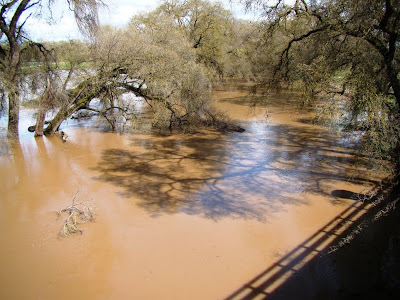 Dry Creek has its headwaters in the foothills of the Sierra Nevada north of Modesto Reservoir. It flows southwest through the farmlands into the town of Modesto, where it joins the Tuolumne River. Dry Creek, despite its name, is rarely dry. Prior to agricultural development in the last century it was indeed dry for much of the year, but since the irrigation began, seepage keeps water in the creek for most of the year. But rarely is there more than a few cubic feet per second. 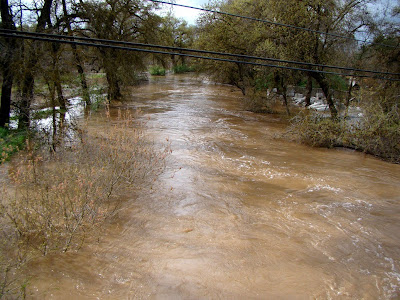 Dry Creek is an unregulated drainage, meaning there are no dams or other measures to control floodwaters. It normally isn't a problem, but every couple of years events conspire to cause problems. This week was one of those weeks. The ground is saturated from weeks of above-normal precipitation, and we had a violent wet storm yesterday that dropped several inches of rain and hail in the foothills. 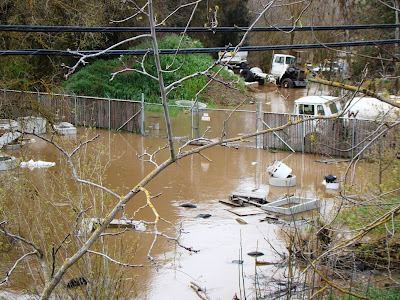 The creek won't stay high for long, but for a few hours today, the flow was over 3,000 cubic feet per second. By comparison, the usually much larger Tuolumne River (with the headwaters many miles away at the Sierra Nevada crest) is at flood stage at 9,000 cubic feet per second. With this discharge, some properties in downtown Modesto may be flooded. Pretty big numbers for a little podunk gully. I would have shown "before/after" pictures, but I never think of taking pictures of the creek when there is no flooding going on. 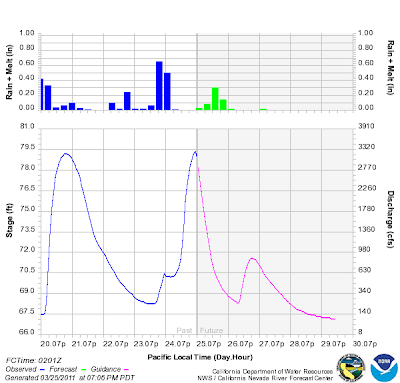