Giant California Earthquakes and the Radiation Cloud; California Falls into the Sea: Geotripper Emerges from the Apocalypse... 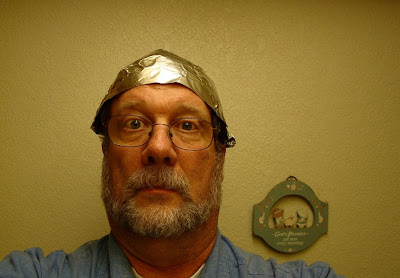 Welcome, survivors of the Apocalypse! Like you, I have been hiding in my underground bunker, safe from the radiation cloud and protected from the supermoon and giant earthquake that caused California to plunge into the sea. I'm waiting to see if my investment in oceanfront property on the Carrizo Plains has paid off with a nice seaside view. Did any of the southern California mountains remain as offshore islands? I was sort of hoping to have a few on the horizon. I've been rationing my cheetos, pringles and beef jerky. I lined my bunker with lots and lots of tin foil to protect myself from the electronic emanations of those pointy-headed "scientists" who kept poo-pooing the predictions of those who sensed the coming Apocalypse in their minds and mathematical calculations. As soon as I saw the work of the prophets on the Internet I knew it had to be true. Their prophecies were aired by the cable news networks, so I double-knew it had to be true. I didn't feel the earthquake because I built my shelter on a spring-loaded foundation. Was it really shaky? My clock broke, so I've been estimating the number of days I've been in hiding by making chalk marks on the wall; it's 2012 isn't it? The Mayan calendar came to an end and all? Have the Zombies died out yet?

Well, that's that. The supermoon weekend passed and California is still here. The full moon didn't scrape along the ground and erase cities. There were no tidal disruptions. There was no earthquake. There were no volcanic eruptions. No one melted from the radiation cloud. The prophets and predictors were wrong, yet again, wrong again for the umpteenth time. Over and over they are wrong. Hundreds of times they have been wrong. And still they find a stage on the cable news networks, the Internet, the radio...over and over. There always seems to be a crowd of uninformed and misinformed people who take them seriously, and there are uninformed and misinformed news readers who are unable to critically assess their irresponsible claims. At the same time they dismiss the statements and findings of academics who have given over their lives to the study and understanding of the earth sciences. And in the end the charlatans and fakes are never brought to account for scaring people and causing economic disruptions.

I've seen enough of "judgment journalism" in politics to know that cable news outlets are capable of shaming those who cross the line of honesty and decency. They are capable of using their media platform to upbraid and criticize officials who steal money or engage in hypocritical behaviour. Why are they not criticizing and shaming those who carelessly predicted earthquakes and radiation poisoning without regard to the consequences of being totally (and predictably) wrong? I have never seen the news readers take a self-proclaimed "psychic" to task for their hundreds of wrong predictions.

Wouldn't it be nice just once to see a camera crew waiting outside the home of one of those self-proclaimed psychics or would-be earthquake prophets and ask them over and over why they made yet another wrong claim that needlessly scared people? Just once to hear them told to their face that they are charlatans and fakes? How long will the con artists persist when they know they will be subjected to public derision when they make their spurious claims?

In the meantime, the media outlets need to learn the real facts about the possibilities of quakes and other hazards in California (and anywhere else) and make sure their audiences know the actual magnitude of the threat. The faults are here after all, and there is a lot of built-up stress. Damaging quakes will happen, and we need to all be as prepared as possible. The first thing to do is to arm yourself with knowledge. Get this knowledge from responsible government agencies like the U.S. Geological Survey, or the California Geological Survey, or academic organizations like the Southern California Earthquake Center. Then you make the appropriate preparations: keep emergency supplies of water, flashlights, radios, batteries, and first aid kits, both in your home, and in your car. Have a family plan for what to do when disaster strikes.

By the way, it is ok to have pringles and cheetos in your emergency supplies...but put some healthy stuff in there too. There is junk food and there is junk news. Too much of either can be harmful to your health.
Posted by Garry Hayes at 11:01 PM

If I've said it once I've said it for the last 5 Ma: Half of California has already fallen off into the Pacific Ocean. How hard it that for you Alta Californians to get through your heads? ;-)

i do not know who you are or how to interperate what you said but california will not fall off into the sea. it may split, making baja an island but if you know anything about subduction zones and slip faults then the notion of this happening does not make sense. making the statement thnat california has already lost ground is also false. you obviously did not pay attention in school. i suggest you go back to school and reeducate yourself. you sir are wrong and i am goimng to call you a LIAR. you are a LIAR.

I think you came out of hiding too soon. Sure glad the internet survived this "catastrophe."

Two words: great picture. Did you happen to pick up any mind waves from the planet Zulf?

I'm glad you threw in that part about the junk food....who can enjoy a disaster if they are dead?

I will add that Ron Schott is right. Much of California (the Baja portion) has already split away from the mainland ("fallen into the sea" so to speak). In another 30 or 40 million years, the rest of California west of the San Andreas will be an island. Each earthquake every century or two will move California northwest another 10-15 feet, and in millions of years there will be countless thousands of earthquakes. But we are likely to see only one or two of them in our lifetimes, according to the probabilities. Of course I am making light in the post today of the less-than-logical things that people get in their heads about earthquakes and other geological hazards. It is sad that some would rather believe a ranting idiot on the Internet than to listen to people who study faulting and earthquakes for a living. We need to be ready for quakes and other natural hazards, though, which was the ultimate point of my post.

I originally read Squirrel's response as hilarious & ironic satire. The misspellings, poor grammar and misinformation seemed too spot-on to be real. I'm still going to read it as such so that I can maintain a shred of hope for humanity. Might want to add some duct tape to the disaster kit to hold California together. Either that or a several "nucular" bombs to fuse the fault together :-)

Great hat, I have looked all over for one just like it and you must of gotten the last one. Now how will I keep the aliens from reading my thoughts lol.