The View of Japan's 8.9 Earthquake from Modesto, California 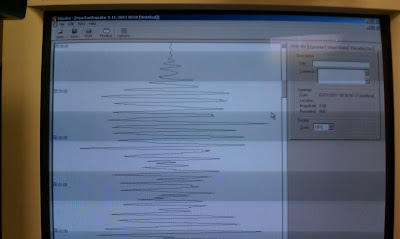 First off, I am sorry for the quality of the photographs. We have a seismometer, yes, but it is a simple teaching model, and the computer program is something like 15 years old (and has never been updated), so the system barely works at all. But it was working well enough to record the shaking of the ground in Modesto, California for several hours after the 8.9 magnitude earthquake in Sendai, Japan. The quake, if the 8.9 magnitude estimate remains unchanged, is the 5th largest ever recorded (I'm hearing that it might be upgraded to 9.0 or 9.1). It has killed hundreds and unleashed a horrific tsunami that has spread across the Pacific Ocean basin, causing damage even in Crescent City and Santa Cruz, California. The simple pendulum-based seismometer records ground motions in my geology laboratory on the campus of Modesto Junior College.

The first photo (above) shows the onset of the waves from the quake. Earthquakes produce a series of different waves which move in different ways, and at different velocities. The first waves arrived in Modesto at 9:58 PM local time, about 12 minutes after the quake began shaking about 80 miles offshore of Sendai, Japan (that is if the computer clock is right, not a safe assumption actually). These are Primary Waves, compressional waves that are analogous to sound waves. Obviously they travel faster than the other waves. They are an example of body waves, those which travel through the earth, not just on the surface. The second set of waves that would have arrived were Secondary Waves, a slower set of body waves that are generated by shearing motions. The closest analogy I can think of is a whipping motion, like that of shaking a stretched "slinky" up and down (this is the demonstration I use in classes). The record on the seismograph doesn't allow me to pinpoint the S-wave arrival. 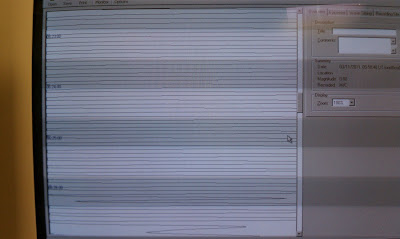 A third group of waves arrive several minutes later. These are surface waves, and as their name suggests, they don't pass through the earth, they travel at the surface. One type of surface wave is analogous to ripples on a pond after a pebble has been tossed in. The surface of the water rises and falls, but fish in the water do not bob up and down. They are unaffected by the passage of the ripples. A second form of surface wave shakes side to side rather than up and down. Surface waves have a lot to do with the damage caused by earthquakes, given the way that energy is concentrated at the surface, and the distortions of the ground caused by the waves. Surface waves continued to be recorded at Modesto Junior College for hours after the quake (as well as reflecting and refracting body waves). In the picture above, 26 minutes had elapsed, and the monitor was off the scale for minutes at a time. 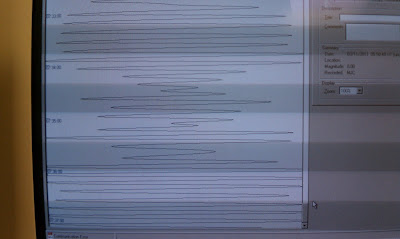 The seismometer is automatically set to record a two hour time period after being tripped, and at the end of two hours, the waves were still immense (above). They probably continued for three or four hours. It's important to realize that the earthquake didn't last this long. From what I've read, the shaking went on for around three minutes at Sendai, Japan (and that was more than enough to cause terrible damage). If the peal of a bell is an earthquake, the waves being recorded at Modesto are the reverberations of the bell. They waves travel back and forth around the planet for many, many hours. The refraction and reflection of these many waves provide seismologists with a picture of the Earth's interior.
A note about the magnitude scale: it is open-ended scale that originally measured the size of the biggest wave to determine if a quake was big, medium or small. It is not a 1-10 scale as is often stated in the media, although rocks can only store enough seismic energy to produce about a magnitude 9.5 event. A giant asteroid impact could produce a much larger event, well beyond a ten. The media often report that a rise of one magnitude represents a quake that is 10 times larger, but this is not exactly accurate. For smaller quakes, the increase of 10 times represents a 10-fold increase in the size of the waves. The waves of quakes at around magnitude 6.5 don't get higher, though, so the magnitude scale loses meaning.
Quakes obviously get bigger, though. The total energy of a quake increases by a factor of just over 30 times per magnitude number. Thus, a magnitude 7.0 like the one that devastated Haiti last year was 1/30th the size of a magnitude 8 quake, and roughly 1/1,000th the size of the Sendai quake. The horrible death toll of the Haiti quake (despite the smaller energy release) was the result of many other factors, such as the shallow nature of the quake, and the location of the focus directly underneath an urban area. The Sendai quake was 80 miles offshore of Japan.
I am almost always disapointed in the commentary of news readers on the cable networks. A few minutes of education would make a world of difference during fast moving events like the Sendai quake. Wikipedia has a reasonably good description of how magnitude is measured. And by the way, I am not the world's greatest authority on seismology, and I am open to correction if I got some of this wrong! That's what the comments section is for...

Postscript: Silver Fox at Looking for Detachment has a list of the geoblogosphere's response to the Japan earthquake here.

Update: Both the USGS and Japanese geologists have upgraded the magnitude of the quake to 9.0, making it the 4th largest ever recorded.
Posted by Garry Hayes at 5:53 PM

Let me add something: Japan had much lighter damage and fewer fatalities than Haiti in part because Japan has strict building codes, and government inspectors to make sure building codes are followed.
So next time some conservative bleats about "getting the 'govment' off our backs" remember the hundreds (thousands?) of people in Japan whose lives were saved by their government.

You are absolutely right, not to mention that the Republicans revealed a plan today to cut the budget for the Tsunami Warning Center...I'm sure Bobby Jindal can explain that for us...

As someone who works in transportation, this quake really makes me think about how we build things here in California. Many of the standard overcrossings we drive on everyday would have simply collapsed. And, unlike us, Japan actually is willing to spend the money to build things right, to the extent that some in the engineering community think they typically over-engineer their infrastructure.

I'd say overall, Japan has shown the success of their investment, despite the tragedy and horrendous destruction. I hesitate to think of what San Francisco would look like if hit by a similar quake.

Randy, I am terribly sorry for your ignorance/lack of understanding of conservative policies. We want the government to help in times of natural disaster and to protect us from jihadist jackasses; however we do not want the government taking people's hard-earned money and giving it to some low-life who does not even care to have a job himself. The democrats have doubled the US deficit and have decreased the value of the dollar because they spend money that we DO NOT HAVE. And your government (Obama) is too busy picking his March Madness teams to give a shit about anything else. I look forward to your reply.

Do NOT feel free to lace your comments with profanity and insults. They will be deleted. Frankly, if you are trying to represent a conservative viewpoint, your effort is unpleasant and quite unconvincing.

@ michael
hahahaha that was hilarious and also spot on