My Favorite Geologic Picture: Oh, so many to choose from...(Accretionary Wedge #32) 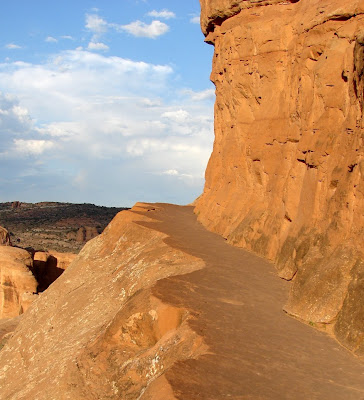 The Accretionary Wedge for early March is sponsored by Ann's Musings on Geology and Other Things, and we are asked for our favorite geological picture. What a hard choice!

Long before I had a digital camera, I used a particular slide from a trip in the 1980s to introduce my students to the idea of the fascination of geology. It was taken next to one of the most famous photography spots in our national park system, but it is not a picture of the iconic feature. It's the trail leading to it. Delicate Arch of the "Real" Jurassic Park lies just around the corner, and a crowd is often found there, especially at sunset. But I see fewer people stop and consider this scene....

I got into geology in part because of the wonderful journey of imagination that it is; a geologist is a world traveler, and a time traveler. The trail in this picture is formed on a natural break in the rock. Why is the break there?

In Jurassic time 180 and 140 million years ago, tidal flats and coastal sand dunes spread across this part of Utah. The surfaces of the dunes were pathways for all kinds of creatures, from insects to giant lumbering dinosaurs. The walked and crawled on these sands, and later the surfaces were preserved by subsequent layers of windblown sand. The surface later hardened a bit more than the others, and millions of years later, erosion exposed the old sands. A fracture developed along the surface, and the trail-builders of a few decades ago found it a great deal easier to just remove the overlying rock than to carve a new flat surface at great expense. And so it is that during our brief sojourn on the planet, we walk on the same surface, and perceive the significance of that fact. We use our minds to explore strange alien worlds, and yet these are the worlds that existed before ours and which became the raw materials for our own. 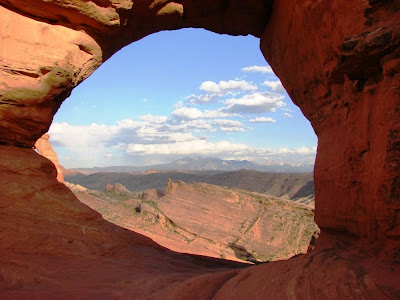 Again, practically everyone walks up to Delicate Arch, but there is another arch just a few steps off the trail that provides a stunning view the distant La Sal Mountains, the laccolithic cores of 25 million year old volcanoes. This picture, taken just a few yards from the one above, contains the four elements of ancient human thought: water, earth, fire and sky (the water is in the sky and in the creek below). The essence of earth science...

Thanks to Ann for sponsoring the Wedge!

UPDATE 8/19/11: Do you need geology-themed photos and images for teaching or research purposes? I have hundreds of geologic images posted at Geotripper Images. Check it out!
Posted by Garry Hayes at 5:04 PM

I took a group of students up to Delicate Arch for the sunrise one year. As the light slowly showed the surrounding scene, a student looked over the edge of the ramp in your picture and said that it was good they came up in the dark, because she would have a hard time walking by the edge in the light.

Thanks for the images of Arches.

I always thought it was nice how the slope was towards the rock and not the cliff....

Gotta' love geology! So much fun to experience the earth.

Your first picture reminds me of and arid version of the pass of Caradharas.

Wow! You can narrow it down to a couple favorites? I'd be hard pressed to name my favorite dozen!

There are just so many neat things to see! And since geology is literally underfoot everywhere you go, almost every picture is a geology picture...

Thank you Garry for coming up with these pictures. I know it was hard and I do appreciate you submitting something. The parade is finally rolling so come see it at
http://theaccretionarywedge.wordpress.com/2011/03/12/aw32-a-parade-of-geological-images/