The Other California: Why worry about Yellowstone? We've got our own "Supervolcanoes" to worry about 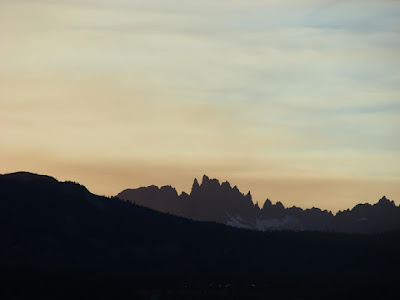 First off, let's get something straight. As far as geologists are concerned, there are no "supervolcanoes". There are stratovolcanoes, plug domes, cinder cones, and shields, but no "supervolcanoes". What the tv documentaries call a "supervolcano" wouldn't technically be a volcano at all, since it is a giant hole in the ground, not a mountainous feature produced by lava flows.

The volcanic features referred to as "supervolcanoes" are actually calderas, large, generally round depressions in the crust that form when huge eruptions of hot ash empty out magma chambers. The destablilized crust collapses inward to fill the void. Calderas form in a number of circumstances, and are not always catastrophic events. On the Big Island of Hawaii, for instance, the calderas on the summit of the vast shield volcanoes are just a few miles across, and are stable enough that the Hawaii Volcano Observatory is perched on the edge of one. On the other hand, the formation of some calderas is a catastrophe of almost unimaginable proportions. The eruption that produced the caldera at Crater Lake involved the extrusion of something like 25 cubic miles of ash, and turned the 11,000-12,000 foot high mountain into a gaping crater 4,000 feet deep, with a crater rim elevation of only 8,000 feet or so. The eruption was around 7,000 years ago, and human witnesses related stories of the eruption that have survived as myths into the present day. A similar-sized eruption in 1815 at Tambora in Indonesia caused food shortages in the northern hemisphere by blocking sunlight. Snow fell during the summer months, disrupting agriculture.

The ultimate in a caldera eruption, though, is one that forms over a rhyolite magma chamber. Rhyolite is a silica-rich magma that can be highly explosive. It is also pasty (highly viscous), and the magma chambers can grow to massive proportions, sometimes tens of miles across. Rhyolite magma underlies Yellowstone National Park, and eruptions produced 185 cubic miles of ash 640,000 years ago, 67 cubic miles of ash 1.3 million years ago, and a simply unimaginable 585 cubic miles of ash 2.1 million years ago. An eruption of that size in the present day would be a civilization killer by way of a more or less instant ice age and massive disruptions of agriculture worldwide.

Everyone (at least everyone on cable tv channels) seems worried that the Yellowstone "supervolcano" is going to explode and kill us all. But if you live in California, you have other volcanic catastrophes to worry about. But that's not what I'm writing about today. I want to talk about a giant caldera that is part of California's past.

Rhyolite and granite are the same rock, at least as far as composition is concerned. The difference between them is crystal size; granite has visible crystals of quartz, feldspar and mica, while the crystals in rhyolite are too small to see. The difference arises from the place where the rock cooled. Granite cools slowly over many years deep in the crust, while rhyolite cools in a matter of hours or days following an eruption at the earth's surface. The Sierra Nevada is justly famous for the extensive exposures of granitic rock that form the sharp pointed alpine peaks and deep glacial valleys. The range is essentially a 400 mile-long tilted block of the speckled rock. What intrigues me is that while all that granite was intruding into the crust 100 million or so years ago (actually from about 140 to 85 million years), there must have been quite a collection of volcanoes and volcanic features on the surface above, features that would have been removed long ago by erosion. Except in a few spots...

The Minarets are probably the most beautiful and spectacular mountain ridge in the state that is not protected in the boundaries of a national park or monument (It is however protected as a National Forest Wilderness Area). The peaks are familiar to travelers headed to Devils Postpile National Monument, as they pass a pullout called Minarets Vista as they cross the crest of the Sierra Nevada. Far fewer actually walk among the pinnacles and towers in the depths of the wilderness. 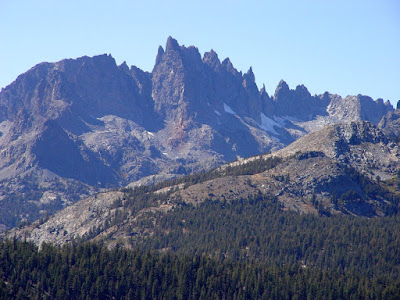 The rocks of the Minarets are clearly different than your "average" Sierra. Granitic rock doesn't usually have the dark tones that are characteristic of the Minarets and is not usually as "spiky" (is that a geology word?). A closer inspection of the rock reveals that they are metamorphic, that is, baked and pressurized. Usually such rocks are older than the surrounding granite, but research reveals that this is not the case here. The metamorphic rocks are roughly the same age as some of the surrounding granitic rocks. The rocks include ash flow tuffs and large chunks of various kinds of volcanic rocks. Chunks, as in pieces as much as a mile wide. Big pieces of rock that collapsed into an evacuated magma chamber. The rocks of the Minarets are the remains of giant caldera, as seen from inside the crust of the earth. 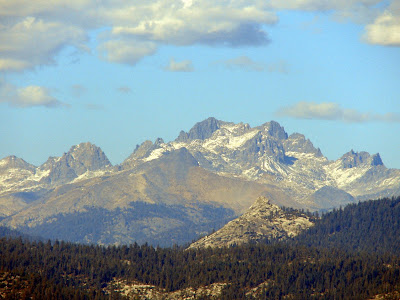 So...Yellowstone National Park is a really neat place to see an active caldera, and if the cable news channels are right, it will probably kill us all by erupting, I dunno, maybe in 2012, but what a cool idea to be able to explore a caldera from the inside out! And it has the added virtue of being absolutely extinct, so it won't destroy us and our society in a cataclysmic explosion (just 15 miles to the east, the news isn't so good; more on that later).

As noted before, the Minarets are easily seen from a distance at places like Minaret Vista, and a somewhat less visited view can be had from the Sierra Vista Scenic Byway on the west slope of the Sierra Nevada. The only good way to see the rocks themselves is to hike in. I did some hiking there in my pre-geology days, and would love to return!

I am trying to visualize and understand how metamorphic rocks and the granitic rhyolite can be close in age? Is there a caldera eruption diagram link you know of to illustrate your description and the one offered in the abstract for this type of event?

The main thing is that the rhyolite (and other caldera rocks) is the metamorphic rock; following the collapse of the caldera, the rocks were subsequently buried and other plutonic rocks were intruded into the caldera sequence. I don't have a good diagram, but I can add some details from Bateman in USGS Prof Paper 1483 (paraphrasing Fiske and Tobisch):
"The angular unconformity at the base of the Minarets sequence is a notably uneven surface that is characterized by steep-walled gullies and small canyons which are partly filled with conglomerate that consists chiefly of volcanic clasts but that includes a few granitoid clasts. The topographic irregularities indicate that the local relief was rugged in the mid-Cretaceous, in contrast to the subdued topography inferred during deposition of the Jurassic and Early Cretaceous strata. Granitoid clasts in the conglomerate at the base of the caldera fill show that some granitoids already had been unroofed in mid-Cretaceous time." Hope this helps!

Excellent post. As someone who has camped right below the Minarets, it is wonderful to get a great--and easy for the layman to understand--explanation of them. Little did I know that I was looking at the remains of an extinct caldera when I was relaxing beneath them.

Thanks Garry for clarifying that the rhyolite was metamorphed and then subsequently intruded into by more magma at a later date, but I guess not of a huge age difference of dozens of millions of years?

Not to argue, but at least some geologists will use term "Supervolcanoes" as evidenced by the 2008 volume of Elements entitled "Supervolcano" http://www.elementsmagazine.org/toc/toc_v4n1.pdf