A Day in the Field...Doing Geology in the Mother Lode 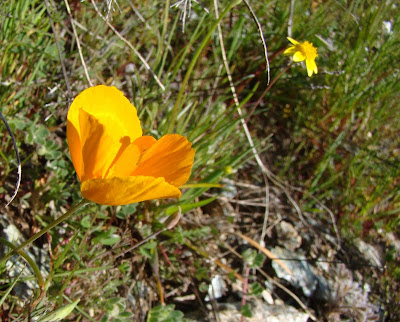 The state flower growing in the state rock next to a site where the state mineral was being mined...the only thing missing was the state mammal, and it's been missing for 80 years. On second thought, I would prefer not to have run into our state mammal anyway. It's the California grizzly, after all. I am talking about an early spring arrival California poppy growing in an exposure of serpentine along a fault in California's Mother Lode where gold was being mined from the 1850's through the 1930's. I was in the field last Saturday!

It's been an emotionally tough week. The sorrow and grief over the earthquake and tsunami in Japan, compounded by the ongoing meltdown at the Fukushima nuclear power plant has been bearing down on most of us. We face draconian budget cuts in our state educational system, and friends and fellow workers received layoff notices this week. Science is under attack at a time when it needs to be upheld as a way of working through serious and profound problems that face society in agriculture, energy and climate change. But the right questions aren't even being asked or discussed.

I have felt despair in so many ways. But like I said, I was in the field last Saturday, and I learned something. Teachers may think of their role as trying to inspire their students, but sometimes it's the other way around. The thirty students inspired me as they discovered some new things about their world. I wasn't dragging them around; they were pulling me...

We were exploring the southern Mother Lode between the Gold Rush towns of Mariposa and Jamestown, and learned how the gold was mined, how it formed, and a bit about the environmental devastation the mining caused. We got to collect the gold ore, quartz crystals, a rare chromium mica called mariposite, and pyrite. We also had a nice view up the Merced River towards Yosemite Valley! El Capitan is the steep cliff on the left, the tip of Half Dome appears just left of center, and Clouds Rest is the snowy peak behind El Cap. 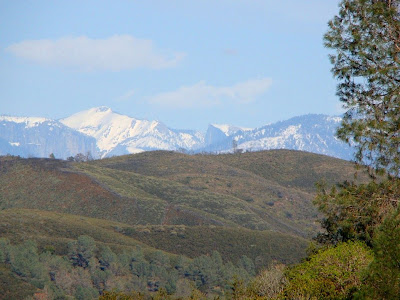 We started at the dredge tailings around Snelling and Merced Falls. To get at microscopic bits of gold that had been carried down the rivers into the Central Valley, the mining companies dug holes down to the groundwater table, forming ponds in which they floated a factory ship that dug out one end of the pond, processed the sediments for gold, and dumped the waste on the other end. They worked their way across the landscape, ripping up the topsoil and leaving behind square miles of rockpiles. The land is mostly useless now, but it provided us an opportunity to identify the kinds of rocks that occur upstream, and which reveal something of Sierran history. There was quartzite (baked and pressurized beach sands), metavolcanic greenstone, slate, and occasional fragments of marble and granite. Three quarters of the rocks found in the Sierra are various types of granitic rock, but in the Mother Lode, the more ancient and more common metamorphic rocks tell a story of ancient shorelines, terrane collisions, volcanism and other activity. These rocks are far older than the granitic intrusions. 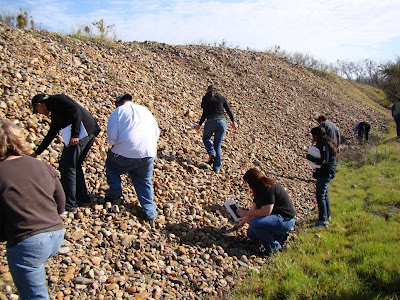 Later in the day we explored an abandoned gold mine (just the outside, mind you) where we found the most interesting minerals, and found the famous outcrop just west of Coulterville where we could see the minerals and rocks in their original arrangement. This stretch of the Mother Lode was relatively barren of gold, so the outcrop was not mined like so many others. 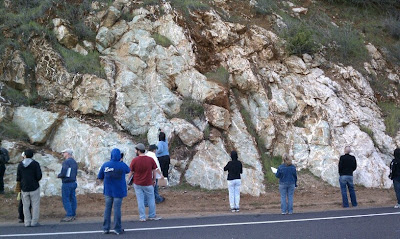 It was nice to see them discussing and exploring the outcrop! That doesn't always happen. 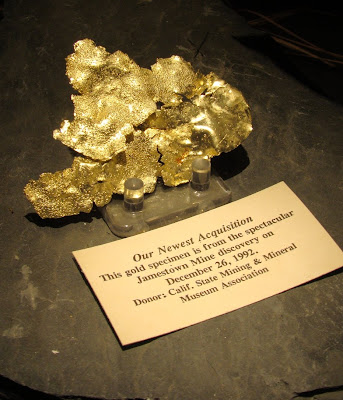 Our day included a stop at the California State Mining and Mineral Museum in Mariposa, where a great many spectacular specimens are on display. I photograph a different group of minerals every time I visit, and somehow I concentrated on the gold this time. The leafy gold above is a piece of a larger 44 lb nugget discovered at the Harvard Open Pit Mine just before it closed down in the 1990's (the big nugget is on display at the Ironstone Winery in Murphys, a bit farther north just off of Highway 49. Below is the Fricot Nugget, weighing in at 13 lbs. It's the biggest specimen on display, and one of the largest to survive the Gold Rush era without being melted down. If you are curious, the largest single specimen ever found in the state weighed just short of 200 lbs. It got melted down, but a replica is on display in the museum. 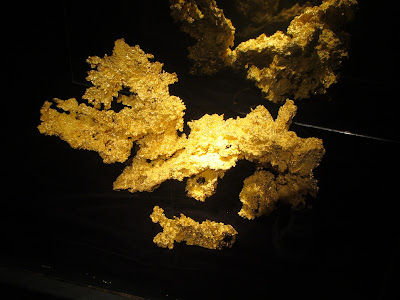 Strangely enough, the specimen I found most interesting was one of the smallest. We tend think of gold as nuggets that have been rolled in a stream and rounded off. We don't often think of gold crystals, but there it is below. Gold crystallizes in the isometric (cubic) system, but not generally as square cubes. The specimen below looks to be more like a dodecahedron. 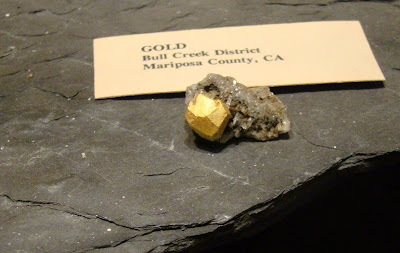 Across from the mine site we took a brief excursion into the Earth's mantle, which is normally found many miles below the crust, but which been pushed up to the surface along a major fault system. Most of the mantle rock (peridotite)has been altered to serpentine, but we could find some chunks of mostly unaltered mantle material. 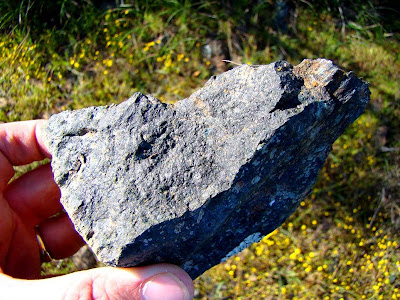 We ended the day with stops to look at the abandoned Harvard Open Pit Mine that operated in the 1980's and 1990's, and at Table Mountain near Jamestown, a famous example of an inverted stream. I may have more to say about it next week, since our geology club is intending to climb it this weekend (in the rain, probably).
All in all it was a good day, a brief respite from sorrow, and a day of being inspired by the enthusiasm of some great students.

Seems like you have a great group of students this year.

If you want a fun, informative, inexpensive day trip, take one of Modesto Junior College Geology Field Studies classes. You won't regret it! I'd go on every one if I could. This was an awesome trip! I thoroughly enjoyed it and learned so much about areas I usually take for granted. P.S. I totally agree that students can "lead" a teacher, especially when one feels blue. Just by being their normal selves, my spirited students have been an inspiration in these tough budget times. They've seen much more hardship than I probably ever will, yet they manage to remain upbeat...somehow!