Momma, I want to be a Paleomagnetologist when I grow up! 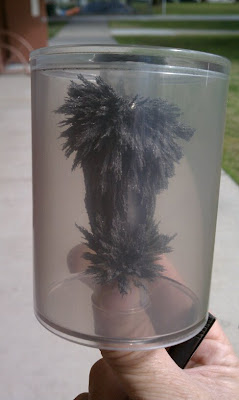 How many of you woke up one day and told yourself "when I grow up, I want to be a paleomagnetologist"? It's a question I ask my classes as we start to talk about continental drift and plate tectonics, and it's usually good for a chuckle (sometimes even two), and not once has anyone raised their hand in an affirmative response. It's a relatively obscure field in geophysics, and although most geologists know what paleomagnetologists do, most of the rest of us do not. What follows in the class is a rather extended discussion about Earth's magnetic field and the behaviour of compasses. We're trying to get to a comprehension level to where we can talk about one of the more stunning discoveries ever made in the field of the geological sciences, a line of reasoning and research that provided unexpected evidence for continental "drift" and plate tectonics. It had to do with the Earth's magnetic field.

Every child has probably played with magnets, dragging them through the soil picking up iron filings, or playing with the Wooly Willy face drawing toy. Later on, some kids encounter the use of compasses by orienteering while hiking with the scouts or other outdoor groups. For many it stops there, but the exploration of the mysteries of magnetism throughout history is quite an interesting affair, and I was unaware of much of the story. So it was that when I was given a review copy and asked to comment on a new book by Gillian Turner, North Pole, South Pole, I was intrigued, and agreed to check it out. In short, I found the book to be well-written, well-illustrated, and quite interesting. 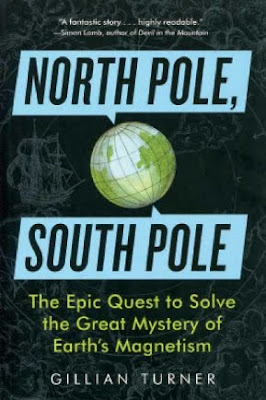 I actually read two books in the last few weeks, and on the face of it they couldn't be more different, but I noticed an interesting parallel. Besides Turner's book, I read an online version of "The Last Ringbearer" by Kirill Yeskov, a Russian paleontologist (!), a re-telling of the "Lord of the Rings" saga from the point of view of the residents of Mordor. It was a fascinating thought exercise that explores the idea that winners get to write the history, and that Mordor's "evilness" was more a construct of the elve's and men's prejudices than of reality.

I recognized the need for a different point of view of history as I read Turner's book. By concentrating on the study of magnetism throughout history, she provides a whole new perspective of the sequence of events that led to the discoveries of "apparent" polar wandering and paleomagnetic reversals, two of the most important lines of evidence that support plate tectonics theory. Unlike Alfred Wegener, who seemed hell-bent on proving his drift hypothesis, the magnetism people were just following the evidence, trying to understand how the Earth's magnetic field worked, and how it had changed throughout time. When they stumbled onto one of the most critical pieces of evidence for the movement of continents (and ocean floors), it was a happy accident, but they were quick to recognize the importance of their findings, even if others outside the field were not. For instance, the polar wander curves for different continents, an unambiguous record of independent continental movements, were worked out in the 1950's, a full decade before the acceptance of plate tectonic theory by most geologists.

I'm not suggesting that the paleomagnetologist's contributions to the debate over continental drift have been ignored, it's just that their methods and findings can be a bit harder to explain or appreciate. That is the value of Gillian Turner's book. She has provided a concise and interesting history of the study of magnetism, and a fascinating new perspective of one of the most important geological discoveries of the twentieth century, plate tectonics. It's well worth a look!

I saw some great roadcuts today in TX. Check out today's post.

Sounds like an interesting read. Especially since I just read an article a little while ago about an airport in Florida that had to shift a runway due to magnetic shifts.