A Day in the Field...Day Backwards On Fun Having, Part One 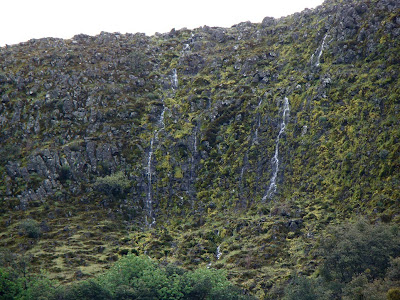 Another day in the field...today it was our Geology Club. It's not enough that I make my students work hard in the classroom and lab, and drag them on field trip courses. The club members raised the funds to go out on their own and see something new and different. Once again the students led the teacher; I even rode in the back of the van! Yup, backwards day it was, in many different senses.

Strange as it may seem, I had, after twenty-two years in this region, never been to the top of what may arguably be the most famous geologic feature in our immediate vicinity. I've flown over it (a near-future blogpost), driven beneath it countless times, driven over it through a couple of erosional breaches, but I have never stood on top of it. So today I got to check off one more item on my life list: climbing the Stanislaus Table Mountain.

Things were backwards in a number of ways. We found the sweet spot between two powerful storms that are battering California this weekend. Yesterday there was so much snow that Highway 80 had a 45-car chain reaction accident and got closed in both directions. Right now the winds outside are gusting to frightening levels. But for four hours this morning the rain in the foothills let up, and we had a pleasant hike, aside from a bitter cold wind at the top. But instead of a normally hot and arid landscape, we had a muddy trail, rivulets of water everywhere, and waterfalls where waterfalls pretty much never happen (see above). 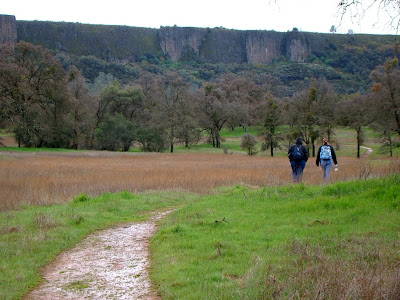 The trail to the summit starts at the end of Shell Road off of Rawhide Flat Road near the gold rush town of Columbia. "Summit" is not the best term though because Table Mountain is not a single peak at all. It is a flat-topped ridge that winds for many miles through the Sierra foothills. It is composed of a basalt-like volcanic rock called latite, and the lava flow displays some interesting columnar jointing in places (below). The flow is 9 or 10 million years old. How did it get to the top of the ridge? That question will be dealt with at a later time. 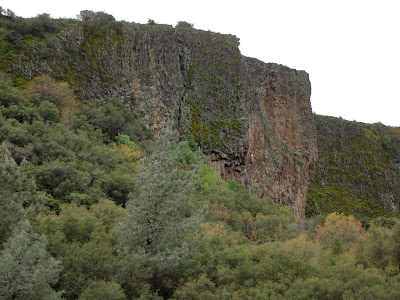 The trail crosses gently sloping meadows and oak woodlands for a mile, and then turns and climbs steeply for a half mile to the summit ridge. The ecosystem changes drastically as the trail climbs the north-facing slope. The path is shaded by numerous trees and shrubs, with some unexpected species for a region that regularly reaches 100 degrees in the summertime. 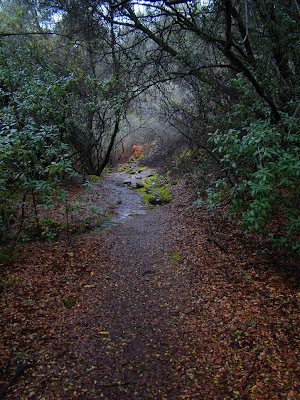 It's a thicket, really, and I'm glad we had a trail to follow instead of bushwacking. The poison oak would have been a real problem! In the picture below one can see the edge of the barren summit ridge. 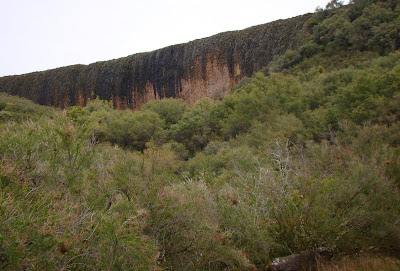 We passed a glen full of ferns opening up for the first time among the brown husks of last year's crop. 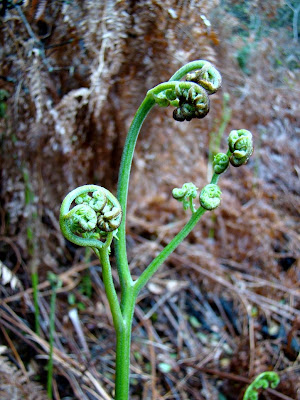 The slope we were climbing was composed of large fallen boulders from the lava flow, a feature called a talus slope. The openings between the boulders can extend hundreds of feet into the slope, and cool moist air will seep out of the slopes all year long. Mosses cover the boulders. 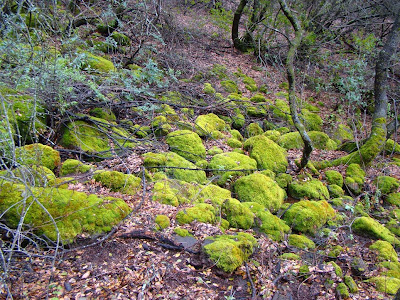 I hope my flower-loving friends will identify the flower for me...I haven't noticed this species before (mind you, I'm a geologist, and flowers are as much a mystery to me as minerals are to botanists). It was fairly common and obvious on the shaded slopes. 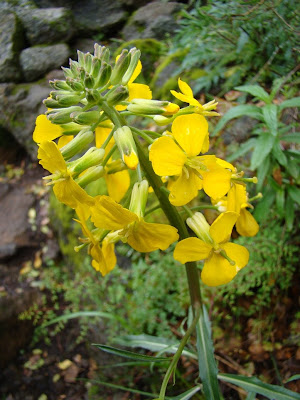 We were nearly to the top, and had a close up view of yet another series of small ephemeral waterfalls. A few more switchbacks and we would reach the summit, the "top" of Table Mountain. Our backwards story will continue in the next post! 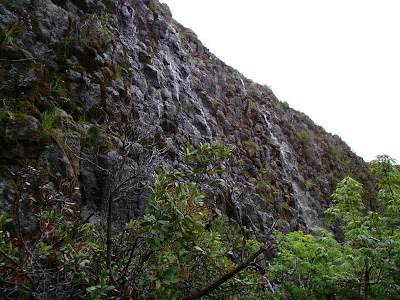 Been wondering where the best place to climb to the top is. Thank you for solving that mystery.

Also, I've been out there when the fall behind the Harvard Mine is really going. It takes a lot for it to run, but it's a great fall when it is.

Look forward to the next set of pics.

place looking awesome an What. You tease you.

Sorry I missed out on today...I was exhausted after being up for two days and slept for 15 hours! Dimitri and I will have to hike this one together soon. I was bummed I missed it.

Awesome! What a day for hiking!

Hey, I have been looking up a yellow flower I have a pic of off the Silver Star Mt in Washington ... and have been seaching and searching for a name for it and the pic you have is the closest I have come upon. Have you ever identified it? Thanks so much!
~RK