The View of Japan's 9.0 Earthquake from Modesto, California, Part 2 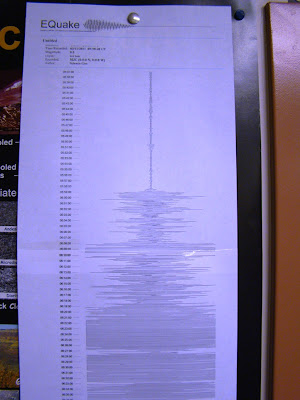 The other day I provided a few screen shots of the seismic record that we captured in Modesto of the Sendai Earthquake in Japan. As I noted in that post, our seismometer is an old teaching model with deeply outmoded computer software, and all I was able to show were some screen shots. Well, I loaded the program on an older computer in the department, transferred the earthquake data to a floppy disk (remember those??), transferred the data onto a third computer where I could transfer the data to a CD-ROM, and finally was able to send the output to a printer. So today I offer the complete record. It's kind of astounding. The top picture is the initial minutes of the quake. You can see the amplitude of the waves rapidly increasing until they were off-scale. The notations on the left are the elapsed minutes, four minutes to the inch.

So what did the whole thing look like? At four minutes per inch, the print job took eight pages. I pasted them together and hung them on the wall, as seen below. This was a big earthquake, as if anyone needed to be told... 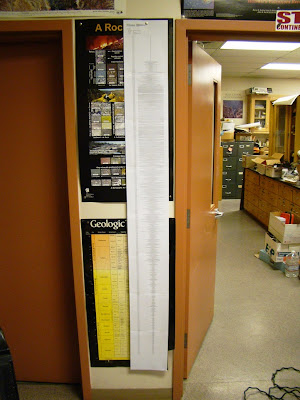 Thanks Garry. I will be showing that seismogram to my students. Very strange. We were in the midst of a unit on Earthquakes for the last two weeks. It all seems much more real.

We California natives are used to earthquakes but have seen nothing to approach this. I lived in SoCal for the Tehachapi, Sylmar and Northridge quakes. Those three were about 20 years apart and my parents told me about the 1932 Long Beach quake. It is almost 20 years since Northridge.

Hi- I'm new to your site and love following your blog! This printout is fantastic! I've dome a similar one with the pages from the USGS site showing activity from different seismographs in Japan. Wish I lived closer so I could sit in on your classes!
Cheers~ Kim Orbik (Minor in Geology from HSU 2000)

It's amazing to have that visual record!