Thanks to Andrew Alden at http://geology.about.com// ...the statement of the American Geophysical Union on the human impacts on climate. It is a call for action...

The Earth's climate is now clearly out of balance and is warming. Many components of the climate system—including the temperatures of the atmosphere, land and ocean, the extent of sea ice and mountain glaciers, the sea level, the distribution of precipitation, and the length of seasons—are now changing at rates and in patterns that are not natural and are best explained by the increased atmospheric abundances of greenhouse gases and aerosols generated by human activity during the 20th century. Global average surface temperatures increased on average by about 0.6°C over the period 1956–2006. As of 2006, eleven of the previous twelve years were warmer than any others since 1850. The observed rapid retreat of Arctic sea ice is expected to continue and lead to the disappearance of summertime ice within this century. Evidence from most oceans and all continents except Antarctica shows warming attributable to human activities. Recent changes in many physical and biological systems are linked with this regional climate change. A sustained research effort, involving many AGU members and summarized in the 2007 assessments of the Intergovernmental Panel on Climate Change, continues to improve our scientific understanding of the climate.

During recent millennia of relatively stable climate, civilization became established and populations have grown rapidly. In the next 50 years, even the lower limit of impending climate change—an additional global mean warming of 1°C above the last decade—is far beyond the range of climate variability experienced during the past thousand years and poses global problems in planning for and adapting to it. Warming greater than 2°C above 19th century levels is projected to be disruptive, reducing global agricultural productivity, causing widespread loss of biodiversity, and—if sustained over centuries—melting much of the Greenland ice sheet with ensuing rise in sea level of several meters. If this 2°C warming is to be avoided, then our net annual emissions of CO2 must be reduced by more than 50 percent within this century. With such projections, there are many sources of scientific uncertainty, but none are known that could make the impact of climate change inconsequential. Given the uncertainty in climate projections, there can be surprises that may cause more dramatic disruptions than anticipated from the most probable model projections.

With climate change, as with ozone depletion, the human footprint on Earth is apparent. The cause of disruptive climate change, unlike ozone depletion, is tied to energy use and runs through modern society. Solutions will necessarily involve all aspects of society. Mitigation strategies and adaptation responses will call for collaborations across science, technology, industry, and government. Members of the AGU, as part of the scientific community, collectively have special responsibilities: to pursue research needed to understand it; to educate the public on the causes, risks, and hazards; and to communicate clearly and objectively with those who can implement policies to shape future climate. 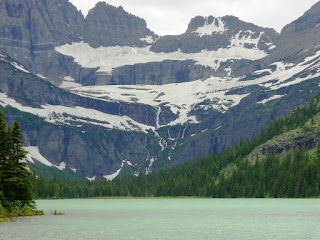 Grinnell Glacier in Glacier National Park is expected to be gone within a few decades, along with all of the others in the park. For a striking graphic of glacial and vegetation change from 1850 to the present and then projected into the future (to 2100), see http://www.nrmsc.usgs.gov/research/glacier_model.htm