Travels in Cascadia: Victoria B.C., the City of Mutton Rocks 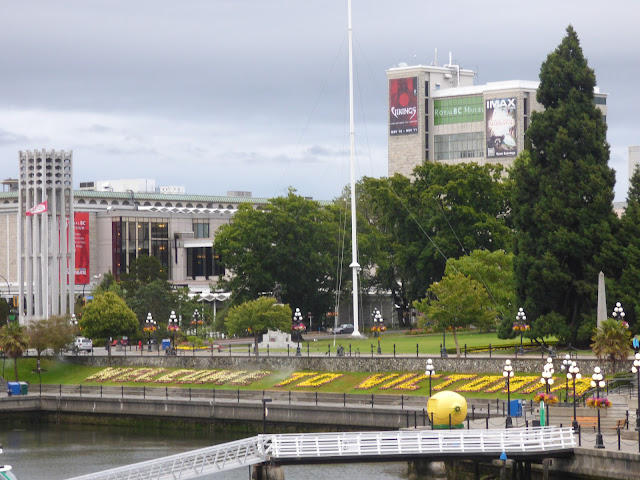 The next stop in our recent travels through Cascadia was the city of Victoria on Vancouver Island in British Columbia. We got there by way of a ferry from Port Angeles, Washington, as described in the last post. Victoria is an attractive city, one of the most temperate in Canada, given its location on the Pacific shoreline (the adjacent ocean moderates the seasonal temperature extremes). It is also unique in another respect. The city is partially constructed on bedrock (the solid rock that underlies surface soils and sediments), and the land was under a vast 1,000 meter thick ice sheet only 14,000 years ago.

This geologically unique combination means that Victoria is sort of a city of mutton rocks.

I imagine that sentence needs explanation... 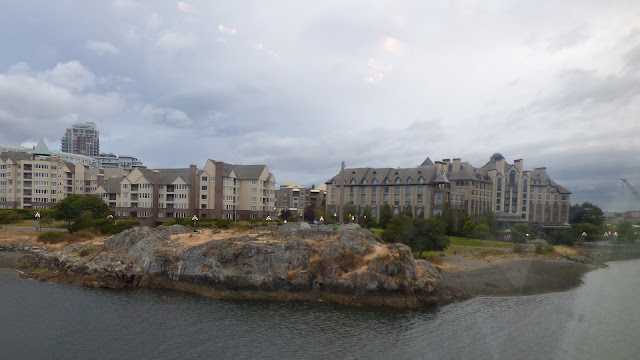 The term roche moutonnée describes an asymmetrical glacially scoured rock outcrop that has a smooth slope on the side facing the flowing ice, and a steep cliff on the side where the glacier pulled away from the outcrop ("stoss and lee structure" is a related term). The scale can range from a few meters to many hundreds. They are common features in regions of bedrock that have been scoured by massive continental ice sheets, such as happened in Victoria. One of the tallest hills within the city, Mt. Tolmie (below), is an excellent example. In the picture one can see the gently sloping forested flank on the left side of the hill, and the steeper plucked side to the right.

The problem with roche moutonnée as a geological term is that we geologists can only barely agree on its meaning. It's derived from French, and the "roche" part isn't a problem. It means "rock". But "moutonnée" is the tricky aspect. It can be translated loosely as "sheep" (think "mutton""), but not exactly (French: "mouton"). Moutonnée (with the extra e's) translates to "frizzy", and is taken as a reference to sheep's wool. The term originated in the 1700s with a naturalist named Horace-Bénédict de Saussure (it would be decades before the term "geologist" was coined) who noted that the rocks looked like a type of wig apparently well-known at the time whose locks were held in place with mutton grease. Except that there seem to be few or no references to wigs that were actually called that (the closest version was a tête de mouton). 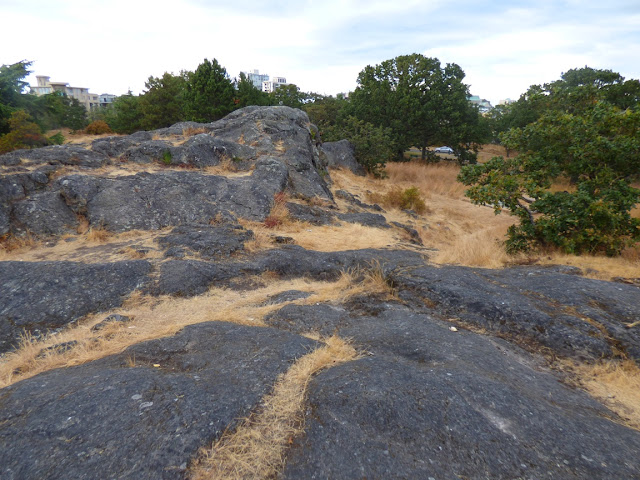 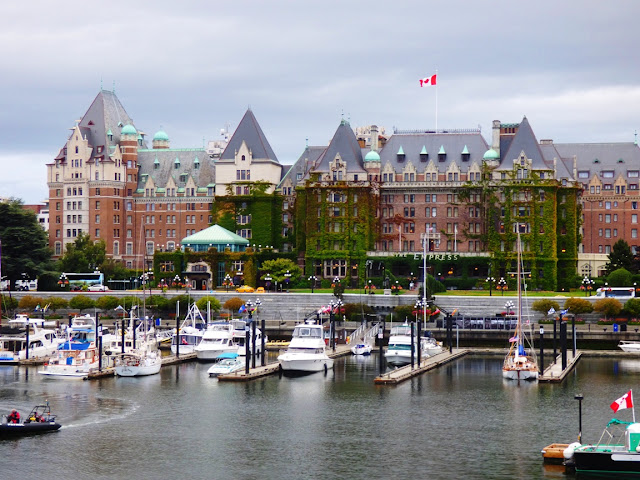 There are consequences to building on such rocky landscapes. There are plenty of large patches of glacial till that are easy to plane off with a bulldozer for building construction, but when the rock crops out, allowances have to be made. Perhaps it might involve blasting to construct a flat foundation. The rock is pretty tough stuff, gabbro, diorite, and greenstone of the Wrangellia terrane, dating back to the era of dinosaurs.

There are problems in this kind of situation. When the Empress Hotel (see the picture above) was constructed in 1904-1905 it was placed partly on solid rock and partly on mud-rich sediments. Complications quickly ensued. The south part of the building subsided several centimeters within the first year and ultimately sank about a meter. It's a real headache for those who must maintain the building. 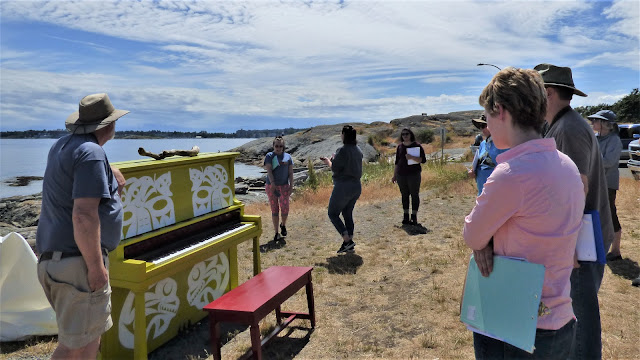 Still, Victoria is a truly beautiful city, and the city has a unique personality. The city has miles of coastline, and there are dozens of scenic shoreline parks. We pulled up at Cattle Point to look at smaller roches moutonnée along with glacial scour marks and striations. Strangely enough, there was a piano sitting on the bluff. It was brightly painted, there was a bench, and the piano was in tune! I wondered what was going to happen to it if it rained, but then noticed a waterproof cover. We later found that there are five such pianos in the parks, and we were actually treated to a tune by a passing jogger, followed by a song by one of our students! 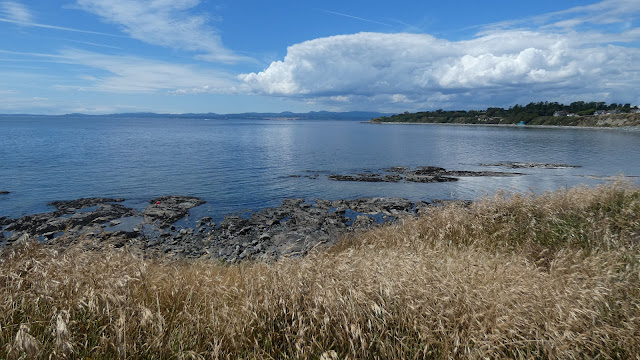 If you ever have a chance to visit Victoria, enjoy the city, but be sure to follow the shoreline drive to see the glacial heritage of the landscape (as well as seeing some dramatic coastal scenery). But the other thing you should do is to hike or drive to the summit of the mutton rocks of the city. Mt. Tolmie is a good choice within the city limits, or you can go just north of the city to the much higher summit of Mt. Douglas. It's a short hike from the parking lot to a summit with a 360 degree view of the region. The Olympic Mountains are visible across the Strait of Juan de Fuca to the south beyond the city, and the many islands of the Strait of Georgia and Saanich Inlet are visible to the north and east. Glacial polish, striations and grooves are present underfoot. 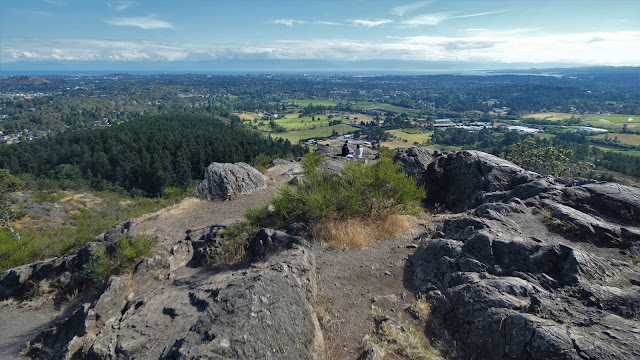 On the day we were there, I saw some unusual looking clouds far to the southeast. I took a few highly zoomed shots and forget about them until weeks later. I started working with the contrast and exposure of the picture and realized I had captured an image of Mt. Rainier across the Puget Sound. The volcano is more than 130 miles away (below)! 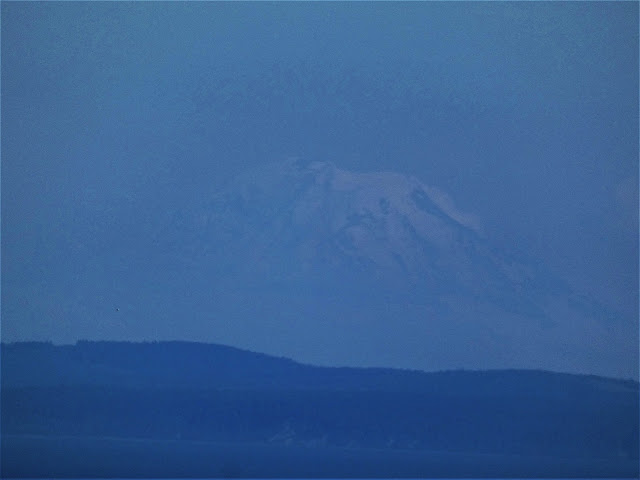