Travels in Cascadia: How Far Can You Spit? Here's one of the Longest Spits, at Dungeness 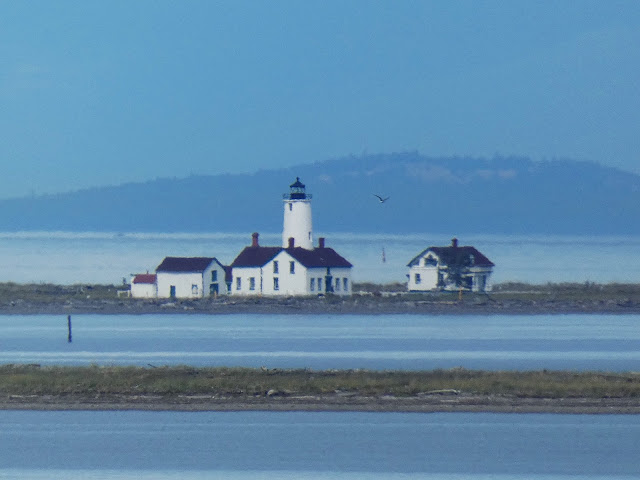 I was never a good spitter. We had a hazing ceremony back in the scouting days where we were blindfolded and had a spitting contest. When one of us let loose a big one, everyone started shouting about how far it went, and how it disappeared over the horizon. "It must be going around the world" someone said, and thus we knew we were about to get hit with a pail full of water from the back.

Of course this post isn't about THAT kind of spit. It's something very different. Take a look at the picture above. It's the Dungeness Spit Lighthouse on the Olympic Peninsula in the vicinity of Port Angeles in Washington. If the picture is a little fuzzy, it's because it was taken at extreme zoom. So we'll back up a little. Those snow patches in the distance are on the slopes of Mt. Baker, a stratovolcano of the Cascade Range. 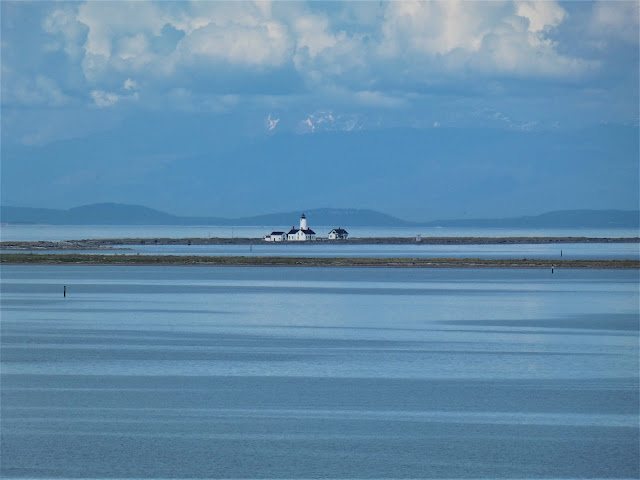 As we pull back even further, one starts to wonder what the lighthouse is built on. Is it an island? Not exactly. If you look carefully to the left you can see a very narrow strip of land. Follow that narrow strip into the next picture... 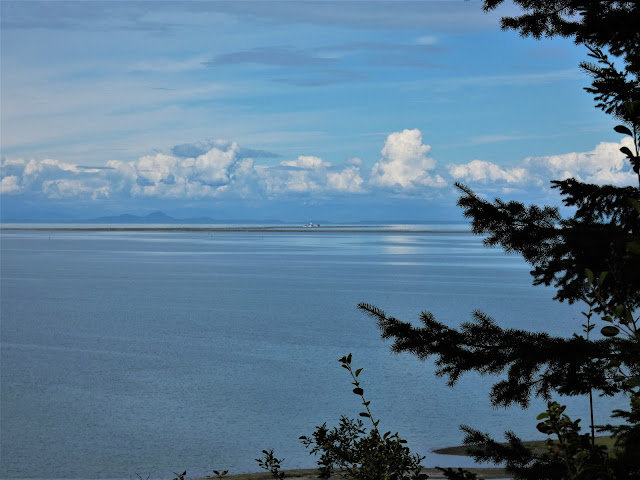 ...and you can see that this narrow strip of land is connected to the coastal bluffs at Dungeness National Wildlife Refuge (yes, the crab is named after the area). It's no more than a hundred or so feet wide.

What is this five and a half mile strip of land made of? As it turns out, it's mainly sand and gravel. And that is what a spit is, a long narrow strip of sand connected to a shoreline and extending out into the water. The Dungeness Spit is the longest spit in the United States (Long Beach in southern Washington has the appearance of a spit and is longer, but it is partly composed of solid bedrock beneath the sand and doesn't quite meet the definition). 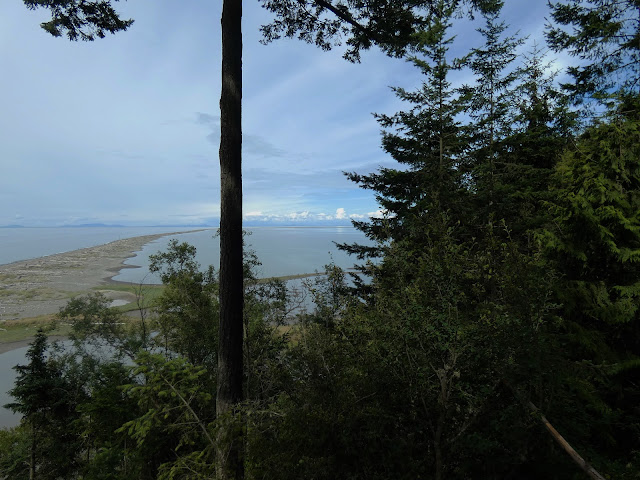 Sand migrates along shorelines because waves often wash up the beach at an angle but flow straight off the beach. In that way, the sand zig-zags along the beach in a process called longshore transport or beach drift. The movement of sand is continuous, and if the beach sands aren't replenished by river sediments the beaches can become more narrow or disappear entirely (dam building in the last century on most major rivers has led to beach declines across the country's shorelines). 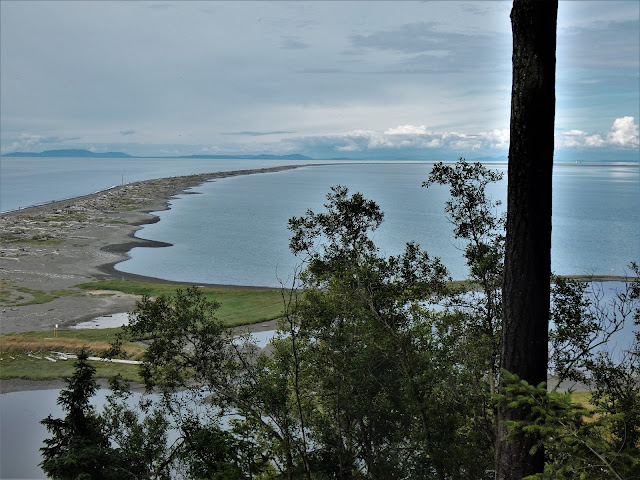 Sometimes there is a sharp turn in the shoreline, or a large bay opening, and turbulent energy is lost as the wave refracts around the turn. The sand is deposited as a bar. The bar grows as more and more sand is added. Bays can be completely blocked by the spit unless rivers provide enough outflow to keep the bar clear. Several of these so-called baymouth bars can be seen in Northern California at Humboldt Lagoons State Park (see some pictures at this link...plus a bonus bad joke). 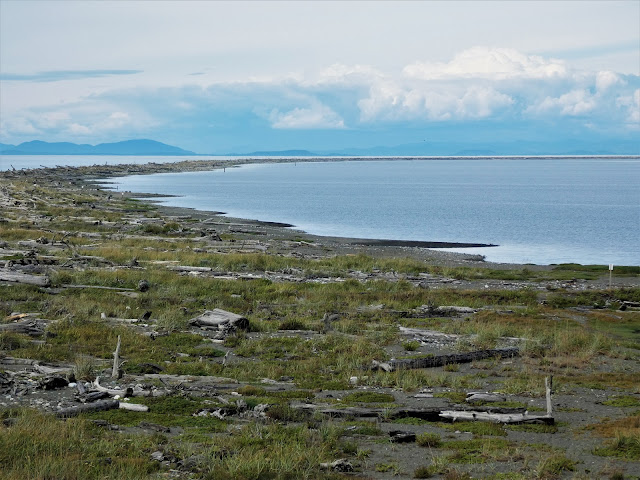 The Dungeness Spit has an interesting source of sand. During the ice ages more than 13,000 years ago the south end of the continental ice sheet covered this area (it covered the entire Juan de Fuca Strait). The weight of the thick ice pushed the crust of the earth downward hundreds of feet. As the ice age ended, large rivers flowing off the Olympic Mountains built up a large delta of gravel at Dungeness. The gravel was essentially at sea level but the crust rebounded upward forming a coastal terrace several tens of feet high (see the picture below). Waves cut into the terrace, forming the coastal bluffs, and providing a plentiful supply of sand for the Dungeness Spit. At 5.5 miles it continues to grow at around 14-15 feet per year. Heavy storm waves can break through the spit, but sand refills the gap relatively quickly. 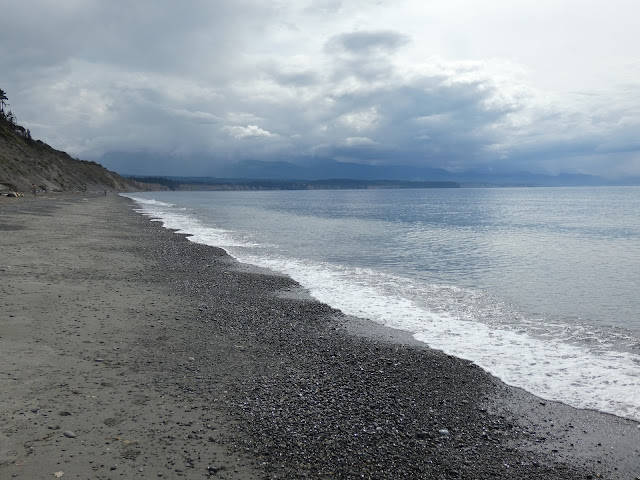 It's not hard to get to the spit. There is a campground and a parking area for the Dungeness National Wildlife Refuge (the enclosed bay is a protected area; more than 200 bird species are known from the area). From the parking lot a half-mile long paved trail wanders through the forest to an overlook where I got most of the pictures seen above. From there you can walk down to the beach and walk as far as you wish out onto the spit. If you are ambitious enough, you can get to the lighthouse for a tour. It dates from 1857 and is the second oldest lighthouse in the state. It is staffed today by volunteers.


This post is part of a new series about our recent field studies course to British Columbia and Washington. Next stop: Olympic National Park!
Posted by Garry Hayes at 12:23 AM

Such an excellent story teller! You always give me mental adventures 🙂🤗