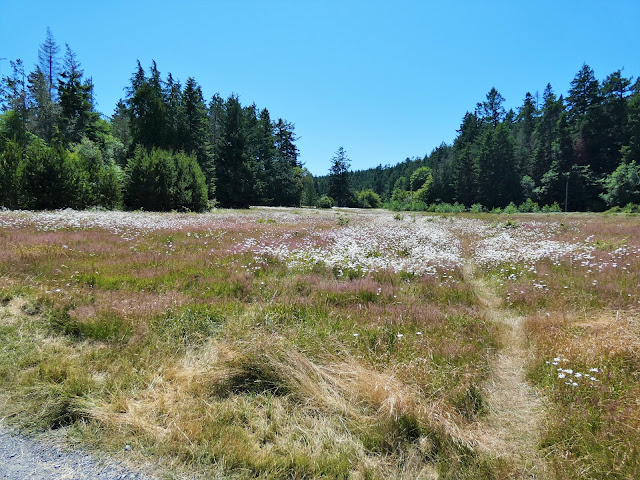 We continued our explorations of British Columbia with a hike at the south end of Vancouver Island at East Sooke. It's an unusual place, out of place with the rocks that make up most of the island. The majority of Vancouver Island is made up of metamorphic rocks of the Wrangellia Terrane. These rocks originated as island arcs and continental fragments in the Pacific Ocean which added to the west coast of North America as the ocean crust sank beneath the continent at the Cascadia Subduction Zone.
But the south tip of the island is made up of rocks related to the Olympic Peninsula which lies 20 miles away across the Strait of Juan de Fuca. These rocks are parts of the ocean crust, and are called the Metchosin Igneous Complex, or the Metchosin Ophiolite. They formed in Eocene time, around 50 million years ago as vast amounts of basaltic lavas spilled out on the Pacific Ocean floor
Ophiolites are generally considered to be slices of oceanic crust that form at divergent plate boundaries. The oceanic crust is pulled apart by extensional forces, relieving pressure on the underlying asthenosphere where the rocks are close to the melting point. The loss of pressure causes some melting to take place, and the resulting basaltic magma rises through fractures caused when the sea floor is pulled apart. An ophiolite has three distinct parts, with pillow basalts making up the ocean floor (more on pillows in a coming post), sheet dikes (the fractures), and gabbro plutons at the base. Gabbro is a coarse-grained igneous rock with the same composition as basalt (it cools slowly, allowing for crystal growth). A pluton is any kind of rock that has been intruded into the crust. 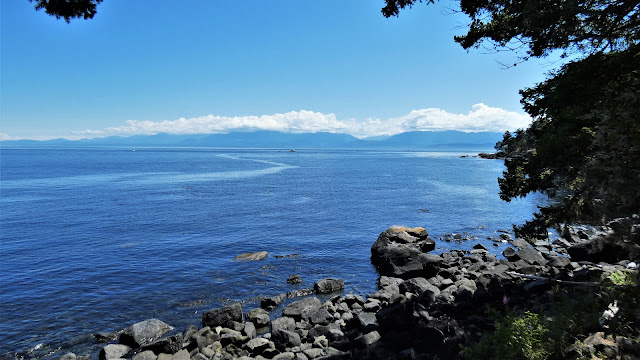 East Sooke Regional Park lies a few miles west of Victoria along the shoreline of the Salish Sea. For a coastal park it has an unusual 'feel'. Because the Salish Sea consists of a series of straits and inlets, wave energy is considerably diminished, at least at the times that I've been able to visit. The waves barely register and the shoreline seems more like a large lake, much like Lake Tahoe in my own home region. But the water is definitely salty! 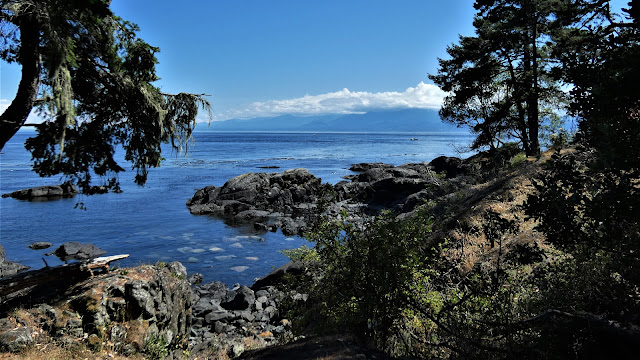 My goal for our class this day was to get a close look at the rocks of the gabbro pluton portion of the ophiolite. In other words, we were going to go walking beneath the ocean floor. The class, a combined dyad of geology and anthropology students had other ideas. The anthropologists slightly outnumbered the geologists, so they were intent on finding some reported petroglyphs in the region. We went hiking on the Alyard Farm Trail, which was a loop of about two miles, first along the rocky shore, and ending in a thick conifer forest. 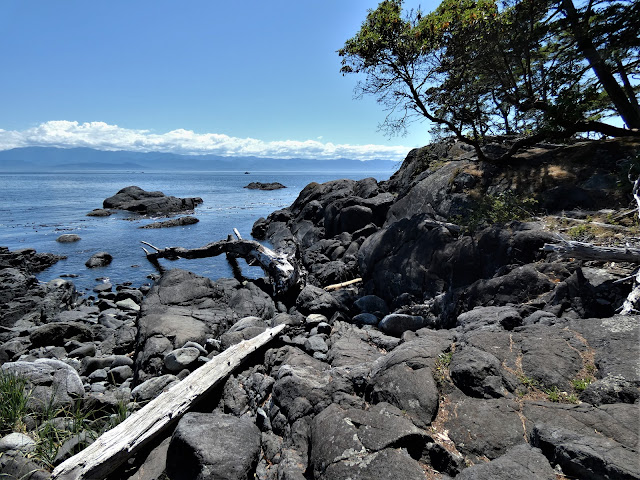 Luckily, the petroglyphs had been carved out of boulders of the gabbro, so we got the best of both worlds, with some glacial grooves as icing on the cake. Can you see the first one in the picture below? Without looking ahead, can you tell what it was meant to be (remember the landscape setting)? 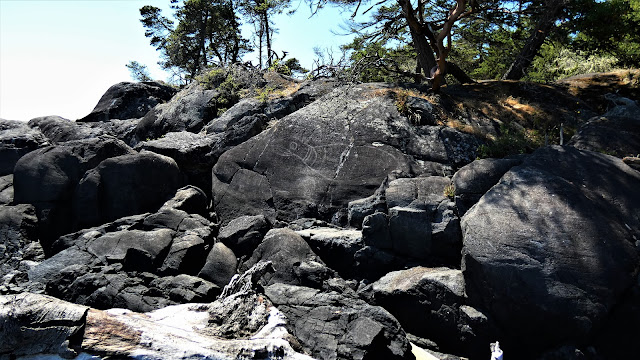 I'm told that this is the representation of a sea lion. One source on the internet (the arbiter of all truth) mentions the following myth about the petroglyph: "Long years ago a great supernatural animal like a sea lion killed many of the Becher Bay Indians while they were canoeing. The tribe nearly became extinct; the remaining members were afraid to go on the water until one day a mythical man caught the sea lion and turned him into the stone representation on Alldridge Point" (Anonymous, Report of BCPM, 1928).

Note the grainy nature of the rock in the picture below. Gabbro is a dark-colored plutonic rock that has the same composition as basalt, but the individual grains are visible because of the slow rate that the magma cooled. The gray minerals are plagioclase feldspar, while the black minerals are mostly a variety of pyroxene, perhaps augite. Small grains of olivine are scattered throughout the rock. 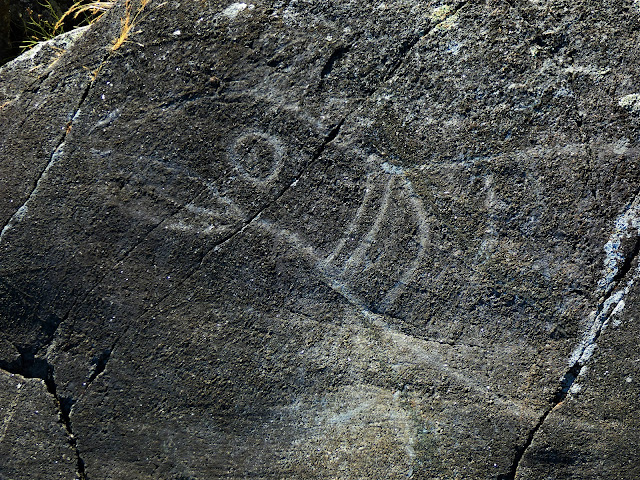 There is a second petroglyph nearby of a salmon (below), but it has seriously faded. Both petroglyphs are attributed to the T'Sou-ke First Nation people, but the age of the rock carvings is not known. They quite likely are thousands of years old, based on the amount of weathering. 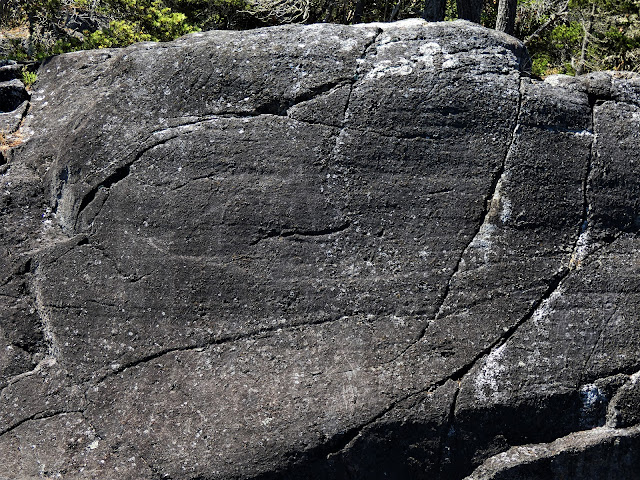 I'll probably say something similar to this many more times as we continue our exploration of British Columbia, but here we go: if you ever have the opportunity to visit Victoria and Vancouver Island, set aside some time to explore the East Sooke area. In addition to the beautiful coastal trail, there is also the East Sooke Potholes, a series of deep pools eroded out of the rocks after the last ice age. We didn't have the time to explore further up the coast, but the guides mention a number of fascinating places to investigate. 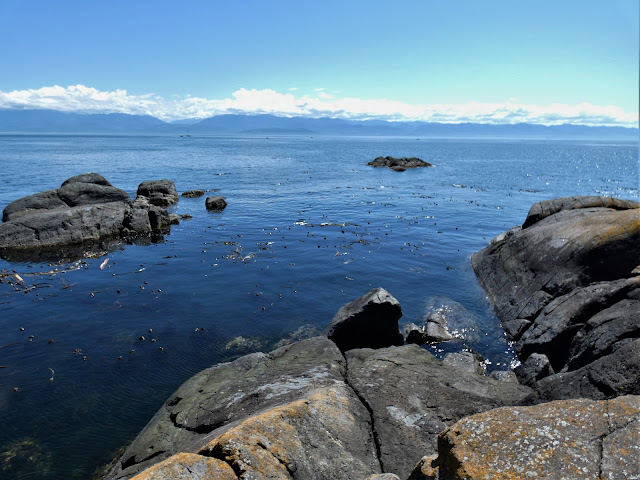