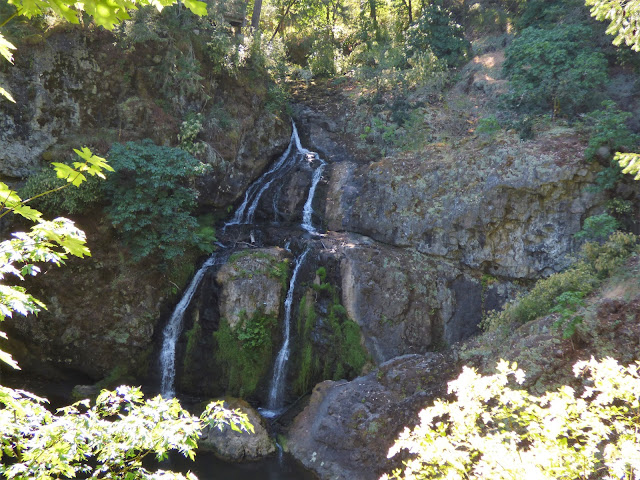 There are so many charming little corners to be found on Vancouver Island. We were well underway on our two-week field course on the geology and anthropology of British Columbia, and on this day we had already explored the Sooke Potholes and the base of the ocean crust at East Sooke Park (along with a couple of interesting petroglyphs). It was getting late in the afternoon and the crew was getting pretty tired, but I had heard that there was another site of interest at the end of a short trail, so we made one more stop. It was a place called Witty's Lagoon, which sounds like a theme park or something, but it actually is a geologically interesting section of coastline along the Salish Sea.

This area (and indeed all of Vancouver Island) was covered by glacial ice as recently as 13,000 years ago. When the ice melted, sea level rose to cover some of the previously exposed lands forming a series of bays and coves. Witty's Lagoon is a nice example of one of these, and it is largely unaffected by urban development. Metchosin Creek flows over a ledge of basalt to form Sitting Woman Falls at the upper end of the cove (above). 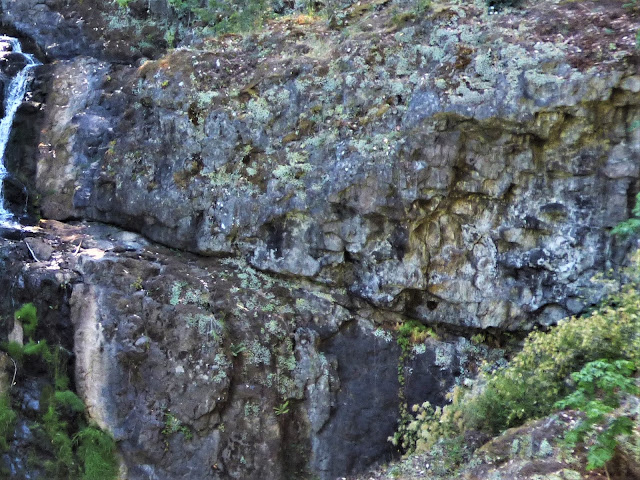 The basalt, part of what is called the Crescent Terrane, has an interesting story to tell. The basalt erupted on the floor of the Pacific Ocean around 50 million years ago at a divergent plate boundary. It originally melted because of the release of pressure at the mid-ocean ridge, and accumulated in plutons several miles beneath the ocean floor. As the crust spread apart, fractures formed and the basalt followed the breaks all the way up to the sea floor where it erupted out. When basalt erupts in water, it forms odd looking lumps about the size of old-fashioned down pillows, around two or three feet across. These pillows accumulated in layers hundreds of feet deep.

The sequence of gabbro plutons, sheet dikes (the filled fractures), and pillow basalts constitute an ophiolite sequence that in this area is called the Metchosin Igneous Complex. In our previous post we had a chance to see the gabbro as it was exposed on the shoreline of East Sooke and Becher Bay. We didn't get to see any good examples of the dikes, but the cliff at Sitting Woman Falls was composed of pillow basalts. I've zeroed in on the section of the cliff to the right of the falls in the picture above. The pillows are not really well exposed, so I've cheated by adding some pictures below of pillow basalts that we've seen elsewhere in Washington and California. 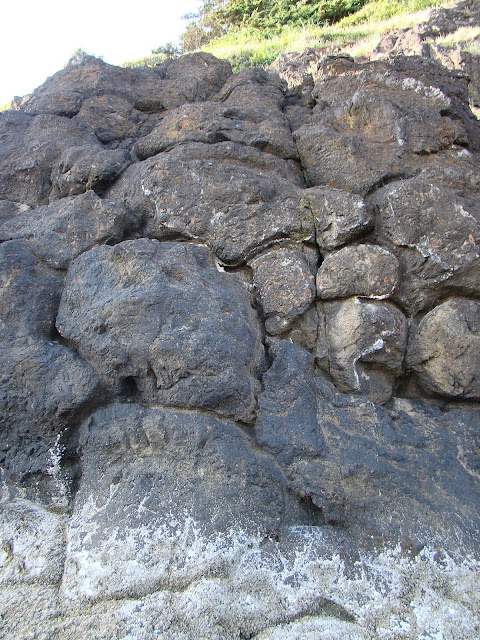 The picture above shows pillows exposed in the cliffs at Cape Disappointment at the mouth of the Columbia River in Washington. Below we can see some pillow basalts exposed near Nicasio on the Marin Headlands in California.

It's incredible to think of the forces involved in taking the oceanic crust from the bottom of the sea, and mashing it into the edge of the North American continent where it ended up being exposed at Witty's Lagoon, and indeed throughout the region, including the high peaks of the Olympic Peninsula across the Strait of Juan de Fuca. 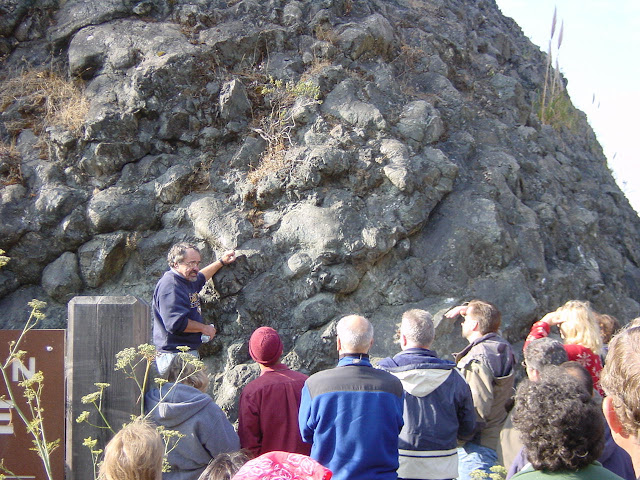