Geotripping! It Could Be You! Geology of the Eastern Sierra Nevada, September 26-30 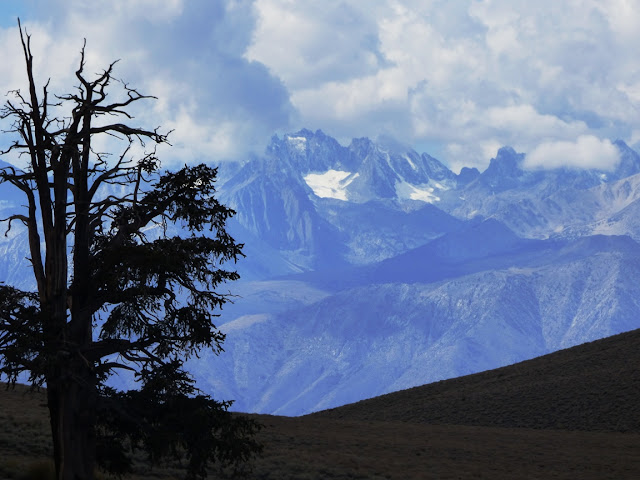 The east side of the Sierra Nevada and the adjacent Owen's Valley is one of the most dramatic landscapes on planet Earth. The valley that forms the eastern boundary of the range is two miles deep, twice the depth of the Grand Canyon. The valley contains active faults (responsible for one of California's most powerful earthquakes ever, the 1872 Lone Pine quake), and active volcanoes, ranging from small cinder cones to gigantic calderas that rival those of Yellowstone. 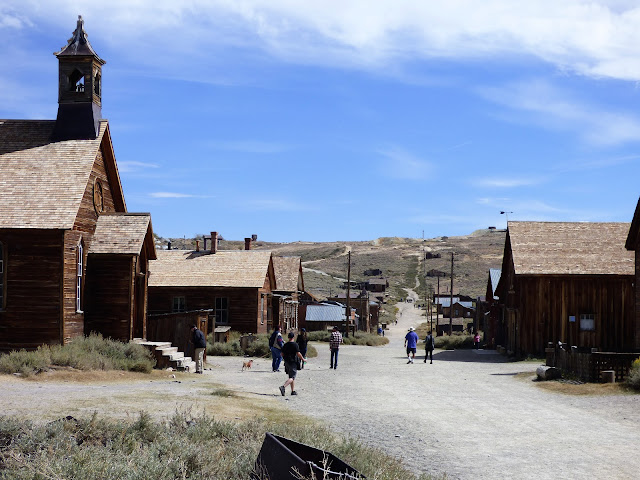 The region is full of fascinating geological features, including Bodie, one of the most well-preserved ghost towns in the American west. There is also the nation's "Dead Sea" which is not really dead at all, preserving the lives of millions of migratory birds. Mono Lake is the epicenter of the LA water wars, an issue that can only become more important as California enters a new and unprecedented climate regime. 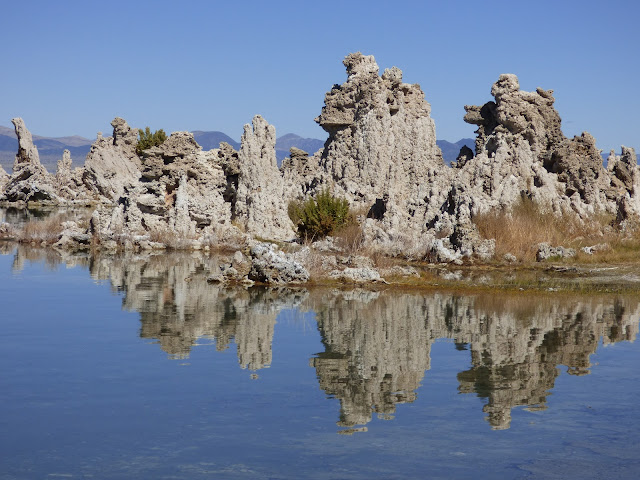 Scenery abounds, and tourists and explorers love this region like few others. But how often have people traveled through this region without the awareness of the incredible geology exposed at their feet? Are you one of them? Have you never had the privilege of exploring this incredible landscape? Well, I've got a great opportunity for you... 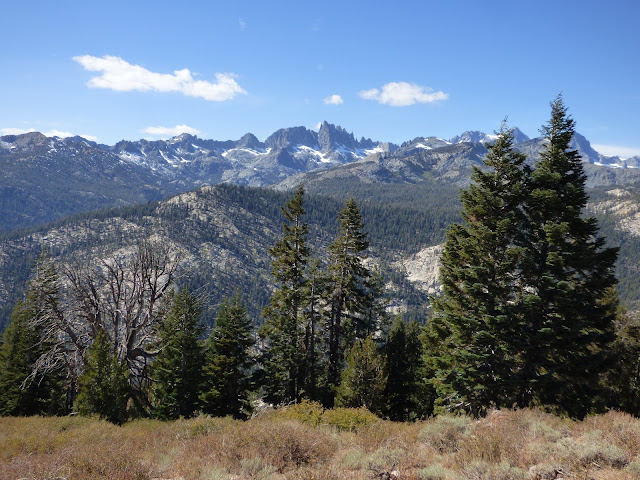 On September 26-30, the Geology Department at Modesto Junior College will be offering Geology 186, a 2-unit field course on the geology of the eastern Sierra Nevada and the Owen's Valley. We'll leave the college early Thursday afternoon and drive to our expected first night stop at Baker Station, the High Sierra Institute, located in the high country of the Sierra near Sonora Pass. The facility is run by our district for a variety of multidisciplinary classes. 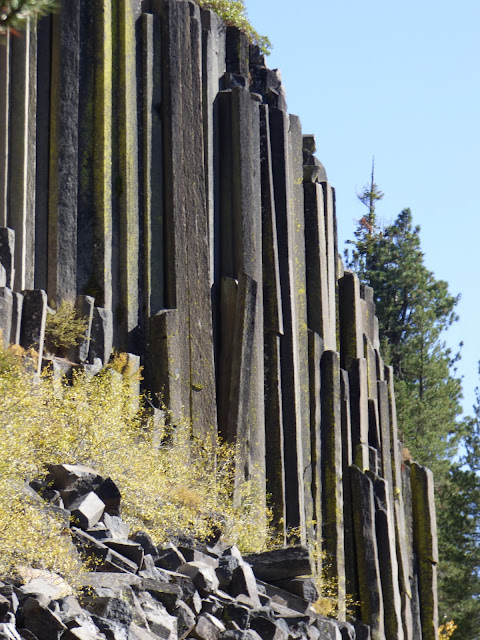 From there we'll cross the Sierra Nevada at Sonora Pass and explore the lands to the east, including Bodie and Mono Lake before arriving at our base camp at Millpond Recreation Area just outside of Bishop in the Owens Valley. We'll spend three days there. We'll check out the Long Valley Caldera, the Volcanic Tableland, Devil's Postpile, Inyo Craters, and Minaret Summit the next day. 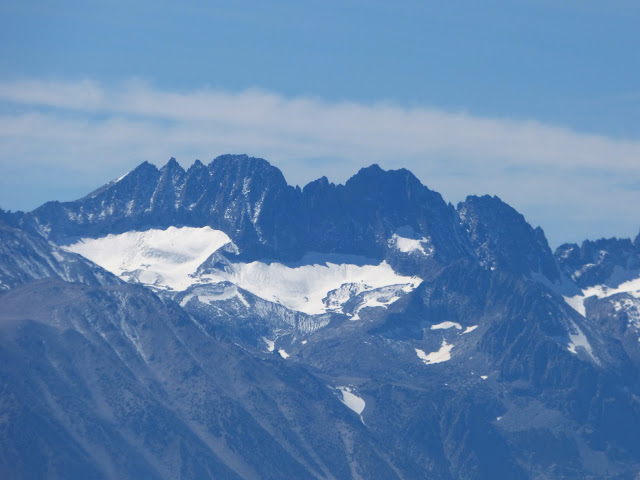 The following day we'll head up into the White Mountains across the Owens Valley from the Sierra Nevada, where we'll have a bird's-eye view of some of California's remaining glaciers, and have a look at the oldest trees on the planet. We'll then head south to Lone Pine and Owens Lake.

Our final day we'll head back up through the caldera with a stop at Convict Lake (below) and then make our way home via Tioga Pass and Yosemite National Park.

We'll be camping out, and you'll be your own cook on this trip. We'll travel in school vans. The trip will cost $80 plus the cost of tuition at MJC (about $100 or so). Information can be found at http://hayesg.faculty.mjc.edu/Eastern%20Sierra%20Nevada.html, and the MJC website (to enroll in the class) can be found at https://mjc.edu/. If you live in the Modesto area, we'll have an organizational meeting on Thursday, September 12 at 5:30 PM in the Geology Lab at MJC, Science Community Center 326. If you live outside the area, I can send you the relevant materials. 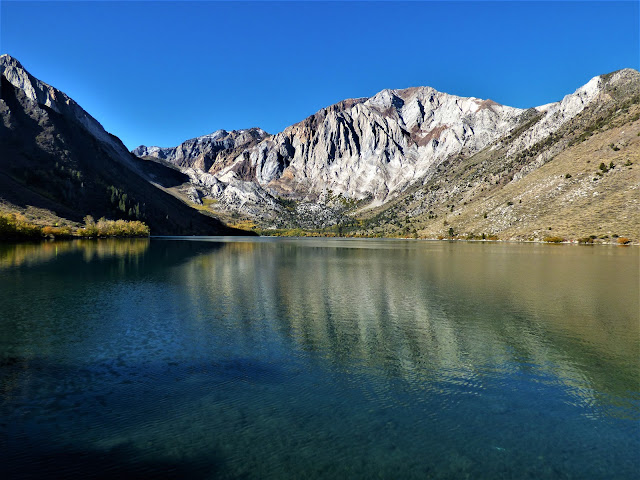 The Sierra Nevada and Owens Valley is an incredible place to explore. I hope you'll be joining us!
Posted by Garry Hayes at 4:18 PM

This might be a silly question, but do we have to be a current geology student to apply? It sounds like a great trip.

Not a silly question. We welcome anyone with an interest in geology.

Great, I sent you an email yesterday to follow up but wanted to leave a comment here as well in case it gets caught in your spam filter.