Anniversary of the Donnell Fire: Nothing in this World is Permanent, Except for Change

On August 1, 2018, a fire started in the Stanislaus National Forest near Donnell Vista on Highway 108. It's not known how the fire started, but lightning was not the cause. It was clear that day. There wasn't much concern, it was confined at first to a few acres, but it blew out of control and started spreading. The so-called Donnell Fire ultimately burned 36,450 acres (57 sq. miles; 147.5 sq. km.) and destroyed 135 structures including the historic Dardanelles Resort. There were nine injuries, but thankfully nobody was killed.
It was a coincidence, but exactly one year later to the day, we headed up Highway 108 to view the damage for the first time. It was sobering. The fire can't be compared to the devastating fires that ravaged Paradise and Redding last year or Sonoma County in 2017 when dozens of lives were lost and tens of thousands of homes burned. But still this fire was a tragedy. It burned memories and experiences. Like so many fires both in Southern California and in the Sierra Nevada, it took away landscapes that have shaped my life.
Fires have always been a player in the environment of California. A Mediterranean climate, with mild wet winters and long dry hot summers is an absolute guarantee that fires will burn. But we have entered into a new climate regime due to global warming that is deeply altering the patterns of fire in California and across the American West. Warmer average temperatures intensify the effects of droughts, causing greater evaporation and drier soils, so trees and shrubs are less able to deal with fires. The fires have increased in size to massive conflagrations, and burn more intensely, "crowning" more easily, and at times altering the soils so they are less able to absorb moisture when precipitation does come.
It was a relief to see that in many areas the fire took on a checkerboard aspect, missing some of the forest groves, which means that the forest can re-seed more readily. In other areas, the destruction was more complete, as in the slopes above the former Dardanelle Resort, seen in one of the pictures below. The recovery of that forest will take much, much longer.
We stopped at a number of our favorite localities. Donnell Vista was not directly affected by the fire, but the viewpoint offered views of a major portion of the burned areas, including the slopes below the Dardanelles Crest, as seen in the first four pictures above. We also checked out Columns of the Giants, one of most awesome geological features along all of Highway 108. The trails and the bridge over the river were intact, but much of the forest and brush around the site were destroyed (see the pictures above and below for a comparison).
The Dardanelle Resort was an especially sad sight. The historic old resort was obliterated, as were the slopes above. The resort had fallen into some disrepair over the years, but it had been purchased by new and ambitious owners only three months before the fire. They intend to rebuild, and a temporary trailer is already in place, serving as a temporary store.

The historic 1933 Dardanelle Bridge was destroyed in the fire (photo below). It was apparently the last scissor truss-style bridge in the United States. It had been replaced by a more modern bridge around 1990 but was still maintained for walking. Ironically it was almost destroyed during the construction of the new bridge when some boulders from nearby blasting landed on the bridge, but it is unlikely to be replaced now.
For all that was lost, much still remains. Highway 108 and other roads provided access for firefighters to battle the fire, so many sections of forest adjacent to the highway survived relatively unscathed. The firefighters were able in particular instances to set backfires just uphill from the highway that moved upslope, removing fuel for the oncoming main fire. In this way many of the cabins and developments were saved. 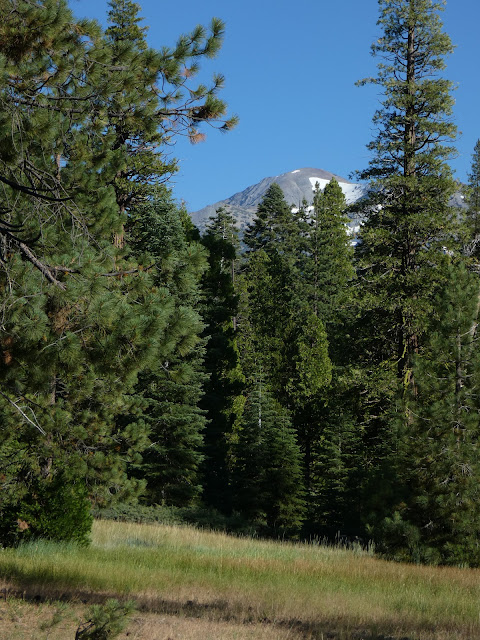 One of endangered developments was the High Sierra Institute at Baker Station. Originally a road maintenance facility, the cabins operate today as a research and educational center for the Yosemite Community College District which includes Columbia College, and my own institution, Modesto Junior College. Some trees on the property were lost, but the backfires preserved all of the buildings on the property. 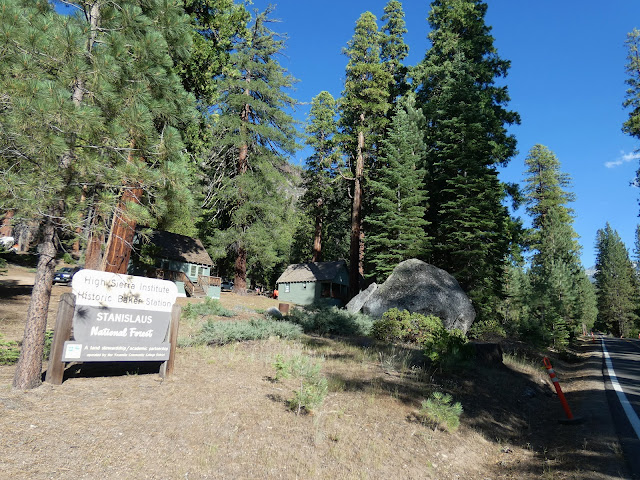 Fires destroy, and fires renew. We live in a new climate regime, and we need to learn how to deal with this new world. Forests will regrow, but they will not be the forests that were lost. The ranges of the animals and plants are shifting northwards and upwards as the climate in California grows warmer and drier. Some organisms will be driven to extinction (the pika is in particular danger, as it lives at very high altitudes, and therefore has nowhere to retreat).

But there is also an emotional toll. We can't maintain the world as a museum where our favorite places remain, unaltered and unchanged by time. Change comes no matter what efforts we expend to preserve the past. Sometimes we can plan for the changes, such as developing master plans for parks and monuments, but wildfires are the bull in the china shop, causing destruction and change without pity or mercy. I grew up in Southern California and watched some of my favorite haunts in the San Gabriel Mountains disappear in wildfires. I moved to central California 30 years ago, and in that time have witnessed apocalyptic events like the Rim and Ferguson fires destroy large portions of the forests along and in the margins of Yosemite National Park.

As those of us who study geology know from our studies, there is nothing permanent about the world except for change. And sometimes the changes are tragic. 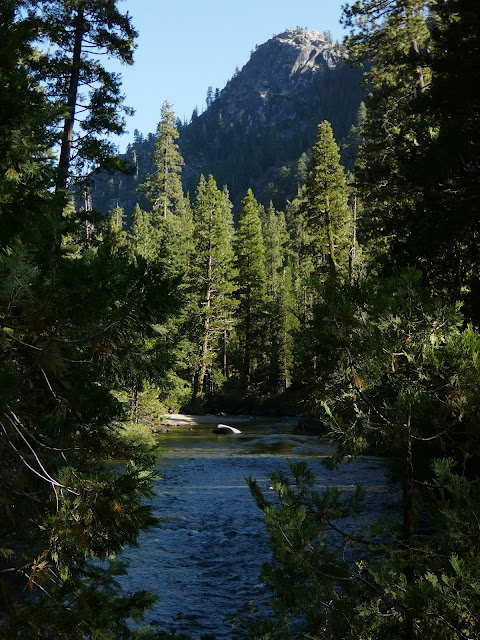 It will never be the same in our lifetimes.
So many memories!!!
What a tragedy, and the STILL don't know the cause?
We were camped at Boulder Flat on August 4th, the day they evacuated the campgrounds. There were "Controlled Burn, Do Not Report" signs on HWY 108 between the Clark Fork road and Eagle Meadow road for at least from the 3rd.

So then the USFS said they did that to keep people from reporting the fire that they knew was a real fire???

I want to know still if it was a bungled controlled burn!