Travels in Cascadia: Flattery Will Get You Nowhere, Except Really, Really Northwest


The trail might well have been designed by gnomes, or maybe even menehune in the rainforest. The slats look uneven and hand-hewn but were sturdy, allowing us to avoid the numerous mud bogs in this, one of the wettest environments in the western United States. It was the trail to Cape Flattery on the Olympic Peninsula in the state of Washington. 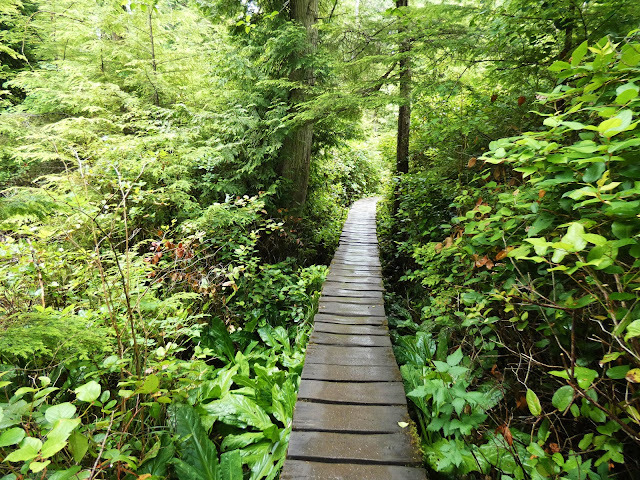 We had spent several days driving to the Seattle area to meet up with the students and my fellow professor. We were setting out on our exploration of the geology and anthropology of British Columbia and northern Washington, a journey that would occupy the next two weeks. The first day took us from Seattle to the Olympic Peninsula where we would learn about the Makah people at Neah Bay. The tribal lands extend to the northwesternmost point of the lower 48 states. There has been a small bit of confusion about whether Cape Flattery is the westernmost point, but that honor goes to Cape Alava, five or six miles to the south and about 500 feet further west. 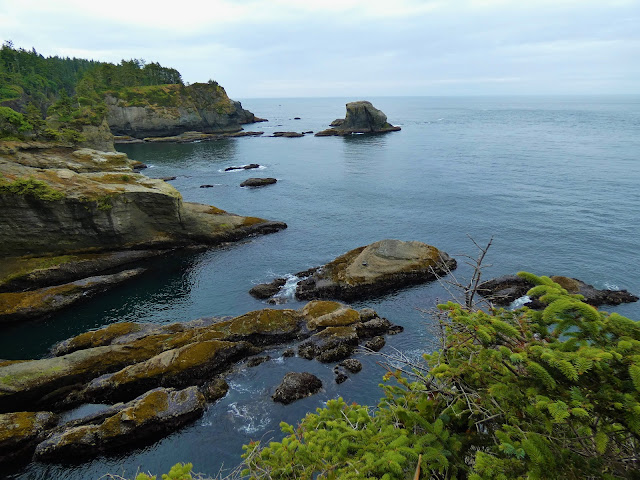 The cape once served as a fortification guarding the Strait of Juan de Fuca during World War II, but in the years since the area has been reclaimed by the forest. If you have walked this trail in the past, you may remember a very badly potholed road and parking area, but in the last few years, the access road was paved and is now a much gentler ride. Hiking the one-mile trail requires a $10/vehicle pass, available at the cultural center in Neah Bay.

According to at least one source, Cape Flattery was named by Captain James Cook in 1778, as he was "flattered" into thinking he had found the legendary Strait of Juan de Fuca, which he had, but didn't realize it. The small island off the coast (seen in the picture below) is called Tatoosh Island, named by Captain Meares in 1788 after meeting the Makah chief Tatooche at his summer encampment on the island. The island was selected for the construction of a lighthouse in 1849-50. The lighthouse was poorly constructed and was a miserable place to live, leading to tensions between some of the keepers. One story relates how the first principal keeper threw coffee into the face of an assistant. They decided to settle their differences with a gunfight. They fired at each other, each time missing, so they called it a draw and shook hands. Later, a third assistant admitted to removing the bullets from the shells in their guns.

The lighthouse was automated in 1977 and the island is under the jurisdiction of the Makah Nation. It is closed to visitation. 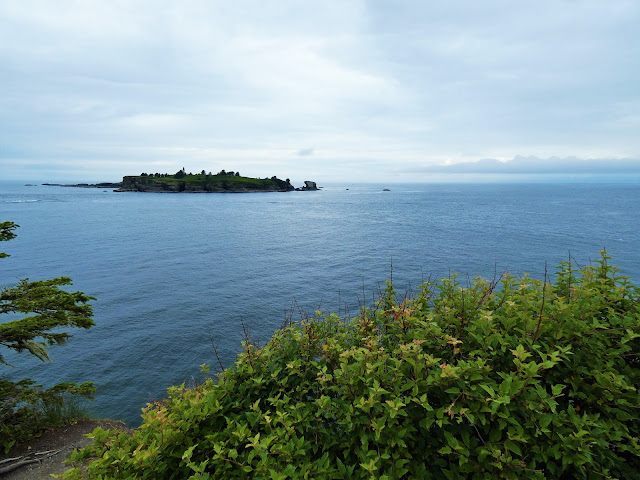 The geology of the cape is not apparent while hiking the trail. There is greenery and soil everywhere. The coastal cliffs reveal breccia and conglomerate that represent deposition in a marine basin near a rocky coast 42-44 million years ago. The source of the rocks was near Leech Creek on Vancouver Island across the Juan de Fuca Strait. The rocks were transported many miles by huge submarine landslides called turbidity currents. 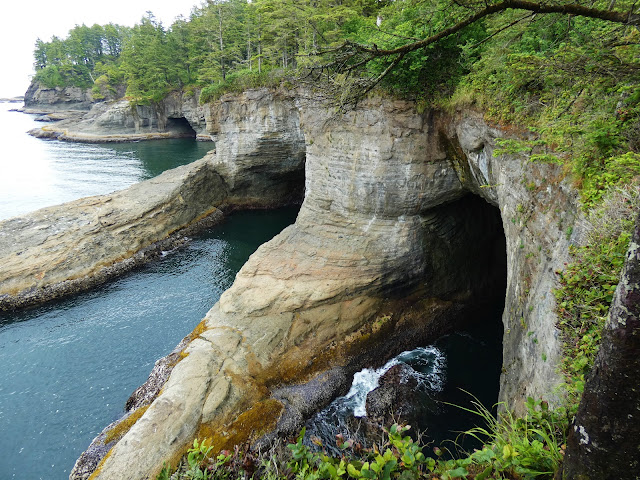 The sea cliffs at the end of the trail are simply spectacular. There are a series of awesome sea caves, some of which are interconnected, accessible by kayaking (if you're nuts...). The trail ends in a group of wood platforms. Going any further down the sea cliffs is pretty dangerous.

The distinction of being the "northwesternmost" point is an artificial construct, but as long as we're going to point out such things, it might as well be as spectacular as possible, and Cape Flattery fits the bill nicely. I highly recommend this hike if you're ever in the area around Olympic National Park. 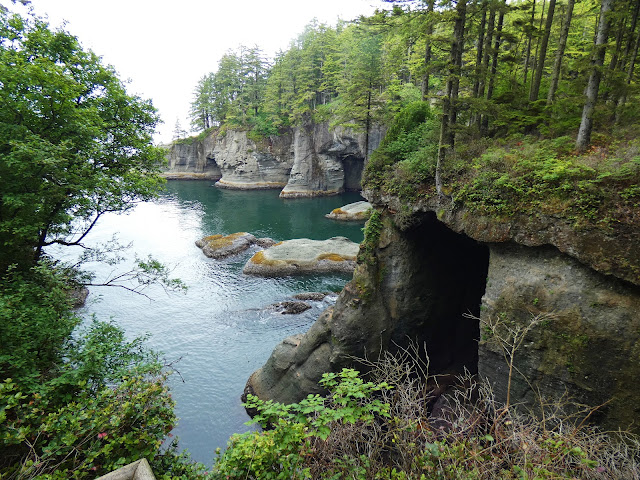 Information about this hike was gathered from several sources, including Carson and Babcock, Hiking Guide to Washington Geology, and Washington Division of Geology and Earth Resources Open-file Report 2003-5.
Posted by Garry Hayes at 3:52 PM

Did you put those leaves there?
Of course not...