All My Faults are Normal, But Not Really: Travels in Death Valley 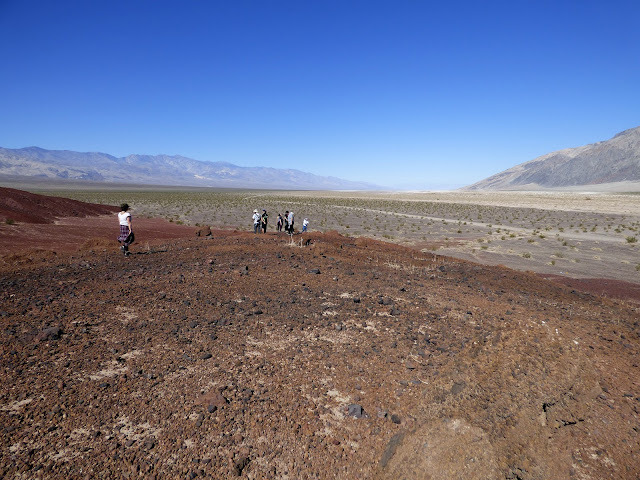 Death Valley is the ultimate expression of the extensional forces that have ripped apart the crust of the western United States. The affected area reaches from northern Nevada and Oregon, east to central Utah, and south into Arizona. The broken up crust has resulted in the formation of countless fault basins and high mountain ranges (the entire region is called the Basin and Range Province). But few of those basins (really just one, the Owens Valley) approach the grandeur of Death Valley. 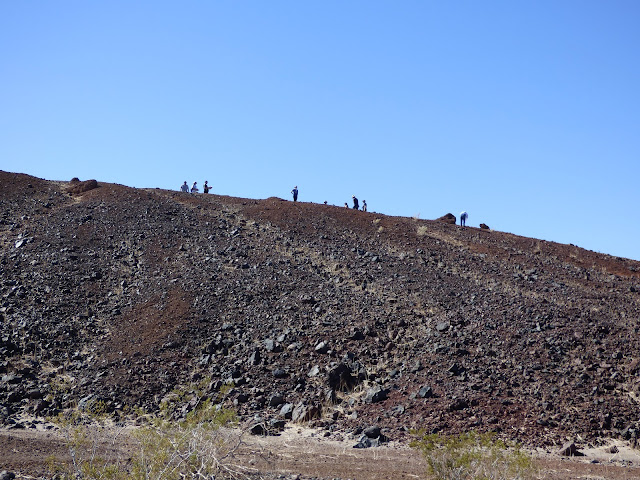 The valley (which is just part of the larger national park) is more than a hundred miles long, and it's deep. The vertical distance from the summit of Telescope Peak to the valley floor at Badwater is more than two miles (11,331 feet). Few places in America display greater relief. And the valley was not carved by water or any other erosional force: it is the result of faulting, the movement of the crust of the earth.

Most students of geology are taught early on that fault valleys are called grabens, and that they are formed by normal faulting. That begs the question of "what is normal?" (a concept I'm sure we all struggle with). Faults displaying vertical motion often have a sloping fault plane, and the fault block that "hangs" over the other is called the headwall (which therefore covers the footwall). When the crust is stretched, or extended, the headwall drops relative to the footwall, and that is what defines a "normal fault". If the crust is compressed, the headwall will move up relative to the footwall, forming an "abnormal fault"...no wait, that's my bad joke from the classroom. It's called a "reverse fault". 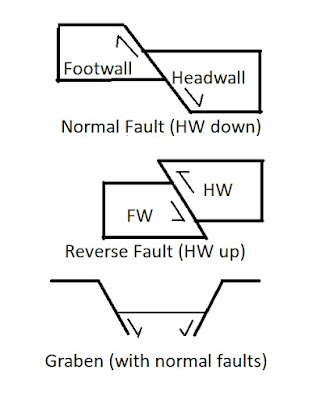 Death Valley is in an isolated lonely region, except for the main tourist area, which lies mostly along Highway 190 and Badwater Road which leads to...Badwater. But Badwater Road doesn't end there. It continues on to the south end of Death Valley and eventually over Jubilee Pass to the village of Shoshone. Few tourists ever venture this way. But there are things to see out there in the deep desert.

There is an odd little hill on the floor of Death Valley at the south end near the Ashford Mill (the remains of an old mine). It's a cinder cone, a small eroded pile of volcanic cinders and bombs that erupted tens of thousands of years ago. It's out on the valley floor in the midst of the alluvial fans, made up of the gravel and sands eroded from the surrounding mountains. The short climb from West Side Road provides a fine view of the graben of Death Valley. It's odd because it may be the only mountain you will ever climb whose summit is below sea level (-73 feet to be exact). 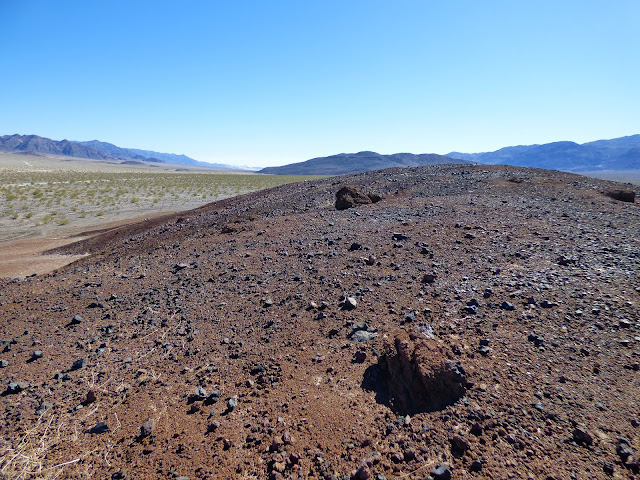 There are other reasons it is odd. Being in the middle of the valley, there seems no obvious way for lava to reach the surface of the valley. For another, it's in pieces. One half can be seen in the photo mosaic below.

From the main highway (below) it becomes apparent that the two pieces are offset from each other. It's been torn apart by faulting, but not by the kinds of faults we looked at above. The side are moving laterally. This kind with the lateral motion is caused by shearing and is called a strike-slip fault. The presence of the fault provides an explanation for the presence of the cinder cone (the magma was able to follow the fault fracture to the surface). But what are strike-slip faults doing in the Death Valley graben? 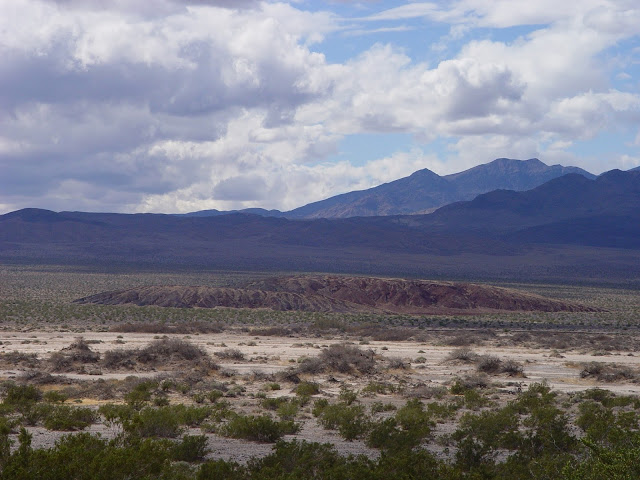 There are two kinds of strike-slip faults, right and left lateral. The type can be determined by looking at what the opposite block has done from the observers position: notice below that Pokey moved to Gumby's right. But from Pokey's point of view, Gumby has moved to Pokey's right. That's a right lateral fault. 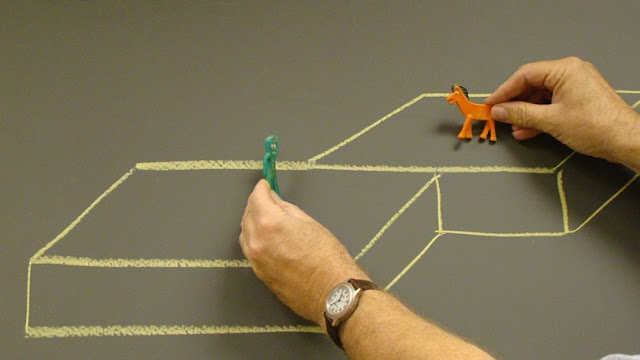 One can therefore see that Cinder Hill in the Google Earth image below is offset in a right lateral manner, with the southwest portion moving northwest. That's a coincidence (not really) because the San Andreas fault, many miles away to the west, is also a strike-slip fault, and it is moving in the same direction. The two faults are roughly parallel. And that provides a clue about the nature of the faults in the Death Valley region. 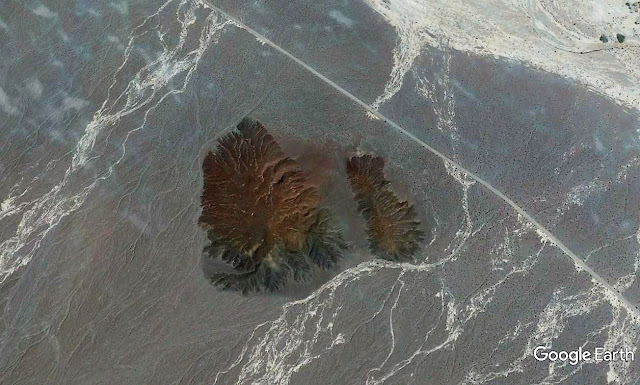 There are other strike-slip faults in Death Valley, and they "step over" in such a way that a gap opens between the ends of the fault. In that area the crust is being stretched apart, forming a "pull-apart basin" (below). Death Valley National Park is being stretched apart to form grabens, but the overall motion is towards the northwest as the Sierra Nevada pulls away from the rest of the Basin and Range Province. 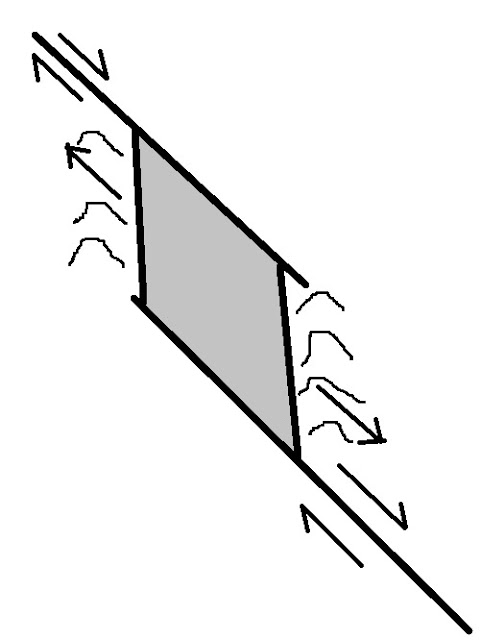 The clues to the broad forces affecting the crust of the planet show up in the way that they deform and fracture the rocks at the surface. Observations of an obscure little cinder cone at the south end of Death Valley reveals that the park is part of a much bigger process of continental motions that divide the North American plate from the Pacific plate. The faults might seem normal, but not all of them actually are.