Waves on Fire at the Devil's Slide near Half Moon Bay 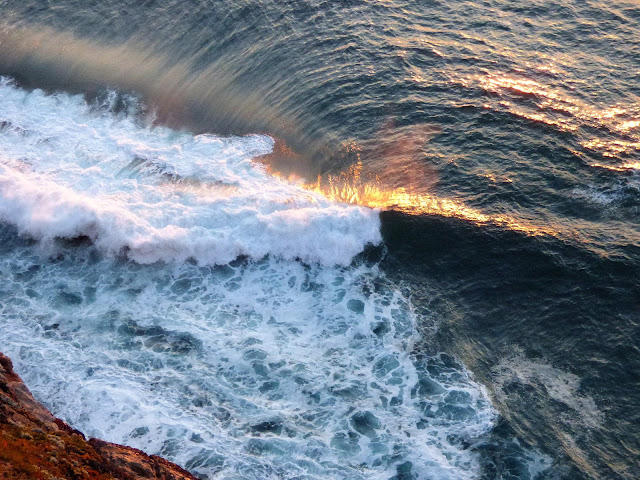 Even though Geotripper is a geology-based blog, it seems ocean waves don't make an appearance all that often in my posts. Try as I might, I don't photograph them very well, or very creatively. I love them, however, and can watch them for hours at times. 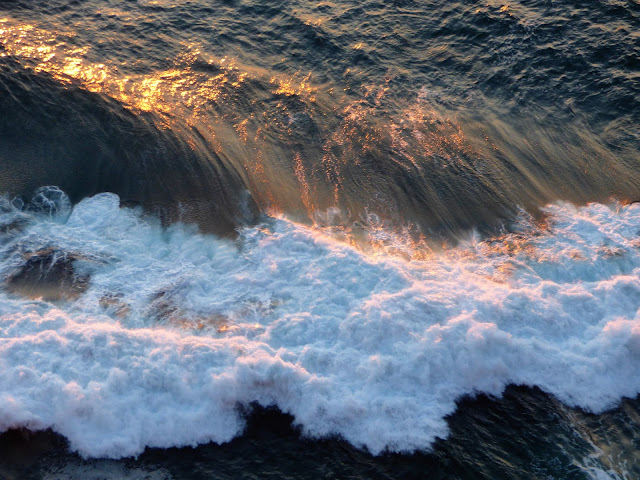 I think part of my difficulty is the point of view. Most of the time we are standing on a shoreline and the waves crash in front of us, always with the curl of the impending breaker, and the swash upon the sand beach. Always the same angle. And that's what caught my attention tonight. We had occasion to be in Half Moon Bay at sunset, and it was a truly beautiful splash of color in the sky. We had finished dinner at Miramar, where the coast is a long curving stretch of sand. Certainly pretty, but we wondered what the sunset would look like from a bit higher...like hundreds of feet higher. So, as the sun sank closer to the horizon, we headed north on Highway 1, and soon reached the new tunnels at Devil's Slide. 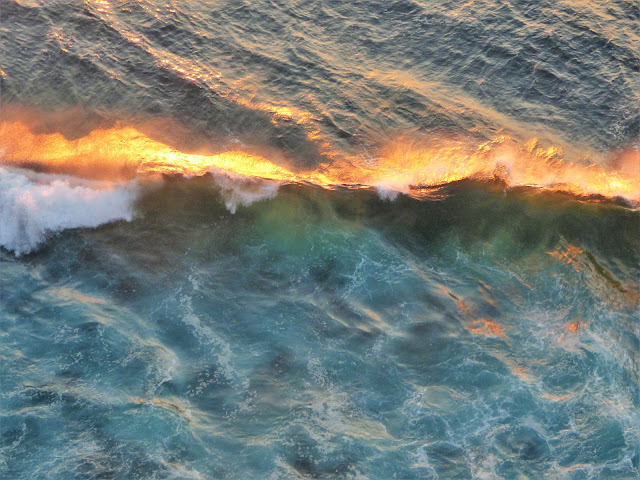 The Pacific Coast Highway was meant to hug the coast from Mexico to Oregon, and the effort to complete it was monumental. Regrettably, almost all of California's coastal cliffs bear the scars of road construction, and only about 25 miles of the state's spectacular shoreline remains as true wilderness. Just the same, there is no experience quite like following this highway from one end of the state to the other. It begins in the nightmare of urban traffic throughout most of Southern California, leading to winding mountain roads through immense Redwood forests in the north. Of all the spectacular stretches of highway, the one between Half Moon Bay and Pacifica has given road engineers the biggest headache of all. It's called the Devil's Slide. 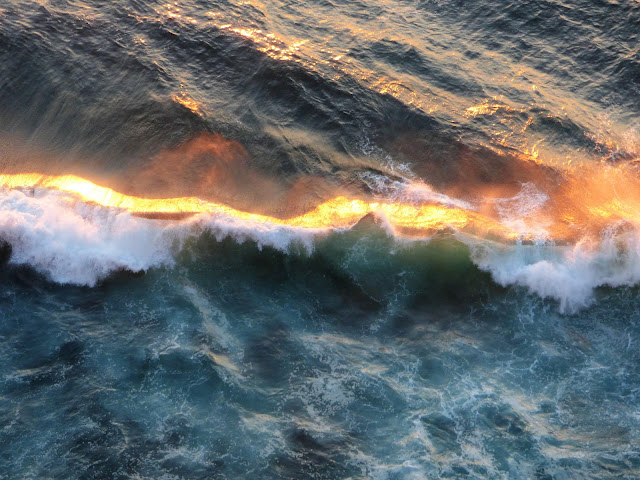 The highway was built over an active landslide hundreds of feet above the shoreline. From the very beginning, the road experienced constant damage from slope failures, and the highway was often closed for expensive repairs. The powers-that-be finally gave up and eventually built the Tom Lantos Tunnels through the mountain behind the slide and closed the old highway in 2014. It was given to the county and is now operated as a trail and scenic overlook. 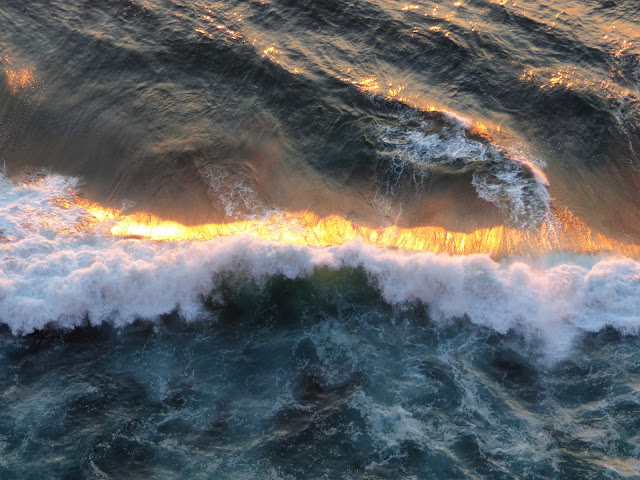 That's where we found ourselves tonight at sunset: hundreds of feet above the shoreline looking almost straight down on the crashing waves. I realized I was seeing something unique, the waves from above, with the dramatic light of the sun on the backside. It was an indescribable sight, so I won't even try. You'll just have to enjoy the pictures. 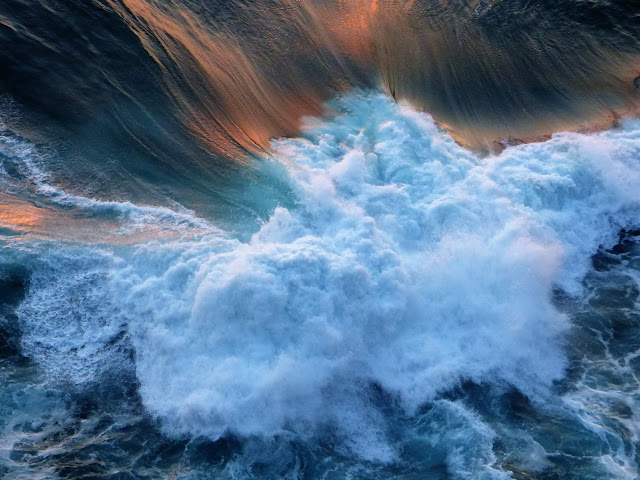 I've included a couple of pictures of the broader view so you can have some context for understanding the pictures above. 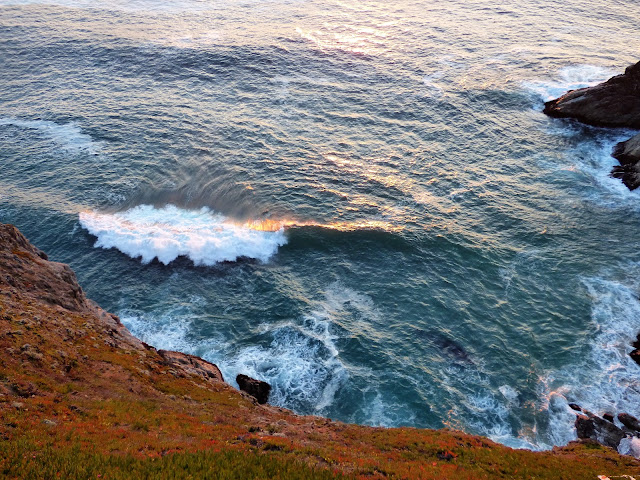 The waves are rolling into a narrow cove, and break as they reach shallow water. The shore is mostly bedrock with no sand, so as the waves break, they often reflect (bounce off the water's edge) and roll backwards, breaking again against the other side of the cove. The intersecting waves create an interesting tapestry. 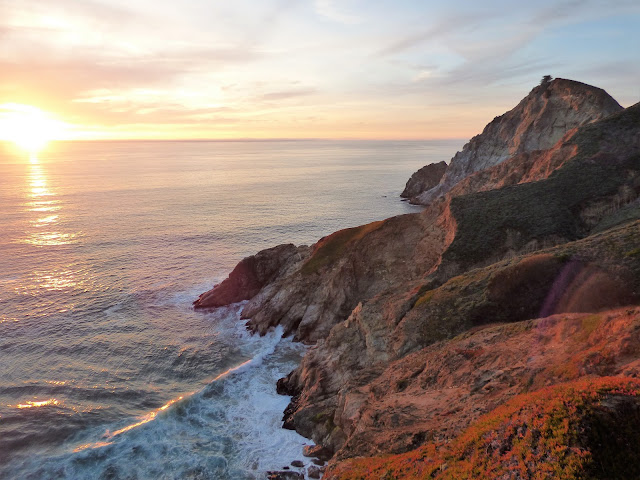 Despite the imposing name, the Devil's Slide is one of the most spectacular stretches of the California coast, and is not to be missed if you ever find yourself in San Francisco. It's no more than 30 minutes from downtown or the airport. I've often visited there while waiting to pick up people from the airport. 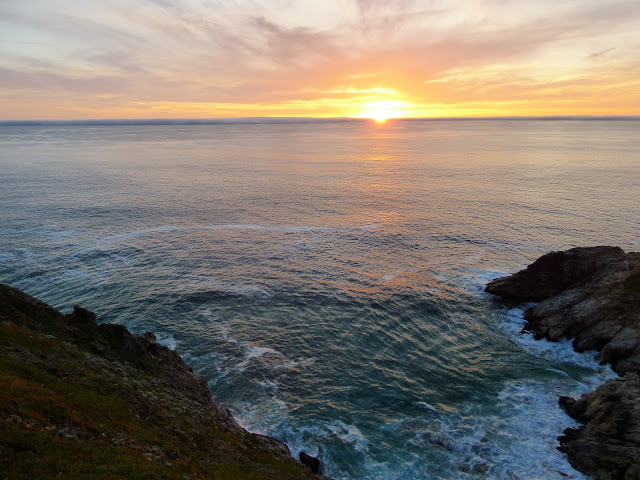