The Struggle for Life in a Harsh Desert: The Living Fossils of Fossil Falls 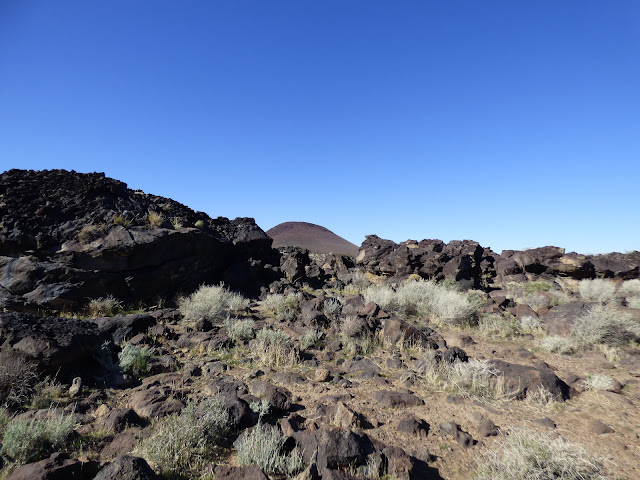 Fossil Falls, the Bureau of Land Management site near Little Lake and south of Owens Valley, is one of the strangest sights in the California Desert. The ironic point of Fossil Falls is that it has neither fossils, nor does it have falls. It is the former path of the glacial ice age Owens River where it drained Owens Lake and spilled over into China Lake Valley. The river was quite vigorous in its time, and carved a fascinatingly complex waterfall complete with giant potholes. But except for the occasional rill formed during rainstorms, the falls have been dry for thousands of years. I've written about the falls at length several times over the years (check out a sampling by clicking here). 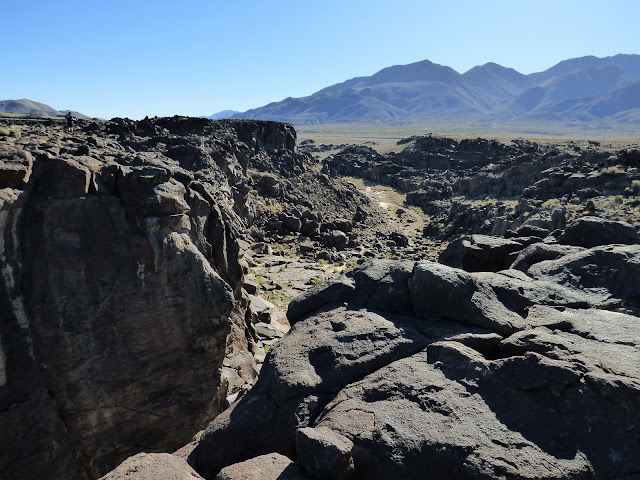 But that's not what I wanted to talk about today. I want to talk about something I know practically nothing about (that's my right as a blogger!!). Every time we stop at Fossil Falls and the students are exploring the labyrinth of potholes and drop-offs, I am on my belly staring at a small hole in the lava flow. What could possibly be more interesting than volcanism and glaciers and faulting and the Sierra Nevada?

Well, nothing actually. But after visiting the site for thirty years, some other things can capture my attention...such as a desperate struggle to survive in a horrifically harsh land. In the small crucible of an insignificant pothole, an entire ecosystem has been born, and has only days to grow to adulthood, reproduce, and then die. The players are small arthropod shrimp, and maybe ostracods (seed shrimp). 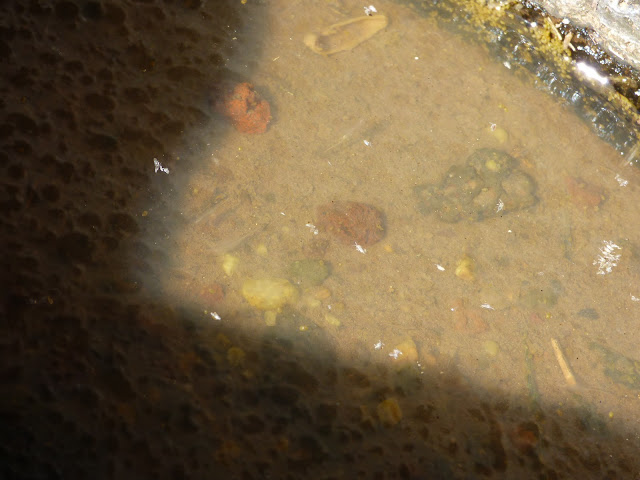 Arthropods were one of the earliest forms of complex multi-celled life to leave a rich fossil record. Trilobites (the fossils of which we will see in a later post) account for around three-quarters of all of the hard-shelled fossils in rocks from 530 million years ago. The arthropod phylum, which includes the insects, spiders, scorpions, crabs, lobsters and many others, is the most successful lifeform ever to inhabit Earth, both in terms of biomass and in diversity. Arthropods are found in the deepest coldest oceans and in the hottest of rainforests. But one might expect that the desert would defeat them, especially those species which have gills, and thus must live in water to survive. But here at Fossil Falls there are creatures that have adapted to the severe climate. Their secret lies in patience and speed.
I'm always struck by how these small creatures cling to life in their exceedingly small habitat. They are the extreme example of how life finds a way even in the most difficult of circumstances. No water most of the time? Evolve a way for the species to survive desiccation even if an individual cannot. Water for only a short time? Evolve rapid maturing and reproduction. Long periods of drought, possibly lasting for years? Evolve eggs (or cysts) that can last for years without water. These tiny beings can show a direct line of ancestry to the first arthropods in Paleozoic seas 540 million years ago, but they are very different creatures now.
I admit to not knowing very much about the species of creatures found in this hole, and an internet search didn't yield very much information. I hope my biologist readers can shed some light on the identities of these creatures. I will gladly add the info to this post. As best I can tell, the larger animals (below) are called Desert Shrimp. The extremely small yellow creatures seem to be either a Seed Shrimp (a Branchiopod), or an Ostracod.
I got a bit of video showing the ghostly Desert Shrimp and the really hyperactive Seed Shrimp. I guess they all have a lot to do, and not much time to do it in...