How Low Can You Go? Badwater Basin, and a Real Hell on Earth


How bad could it be? On our recent trip to Death Valley, we made the rather mandatory pilgrimage to Badwater, the lowest point in North America at -282 feet (86 meters). Although the hottest temperature ever recorded on planet Earth was measured at Furnace Creek Ranch in 1913 (56.7°C; 134°F), it is known that Badwater is often 2 degrees hotter. That's hot. Really hot.
I've regularly worked and played in temperatures as high as 105°F without ill effect at home in the Great Valley of California. I floated down the Colorado River in August of 2013 where temperatures soared as high as 118°F, and I realized that I could have been in trouble if we didn't have the river to dip in every few minutes (because it flowed from deep within Lake Powell, the water temperature was around 48°F even many miles downstream). The hottest moment I've ever experienced was in the aforementioned Death Valley when we had an occasion to be there in late May, and an early heat wave shot temperatures to a near record 122°F. It was simply intolerable outdoors...we retreated to the motel room until the sun went down before emerging to seek dinner. People no doubt adapt to such conditions, but it can't be pleasant.

Looking at this list, it is clear that the Dead Sea is in a class by itself as far as low elevations are concerned. At nearly 1,400 feet below sea level, it is unique in the world. To find anything deeper, we have to reach back into the depths of geologic time. The Strait of Gibraltar is narrow and shallow, and is the only connection between the Mediterranean and any other ocean. What would happen if it ever separated the two oceans? It's not totally idle speculation...it turns out that this actually happened, about six million years ago. The speculation began when vast amounts of salt, gypsum and anhydrite deposits were discovered beneath the seafloor sediments of today's Mediterranean Sea. 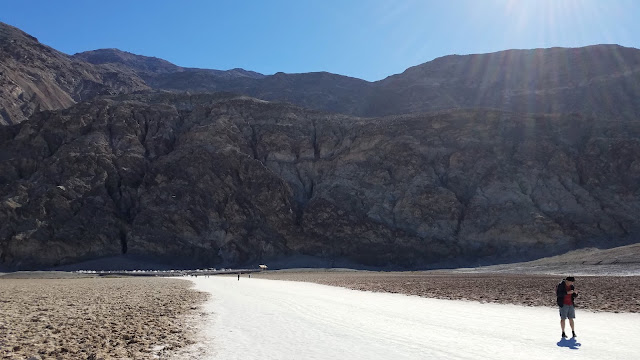 When the cutoff occurred, the Mediterranean immediately began to dry up. And dried more. And then even more. The level of the sea dropped precipitously. It dropped past the 1,000 foot level. And then 2,000. And it kept going. Until the level of the basin reached 15,000 feet below sea level. Three miles below sea level. The implications are staggering in many ways. The Nile and Rhone Rivers would have started cutting deep channels far below their normal level. In places, the subsequent sedimentary layers hide canyons that were once 8,000 feet deep (The Grand Canyon, for comparison is 5-6 thousand feet deep).
The climate changes would be extreme. Air sinking into the basin would increase temperatures at the dry adiabatic rate of 5.5°F per thousand feet. That amounts to conditions at the lowest reaches of the Mediterranean Basin that would be 70°F higher than they would be at sea level. In this desert environment, summertime temperatures could reach 176°F. No organisms could survive at these levels except for a few thermophiles. This is a place no human could or would be able to venture. 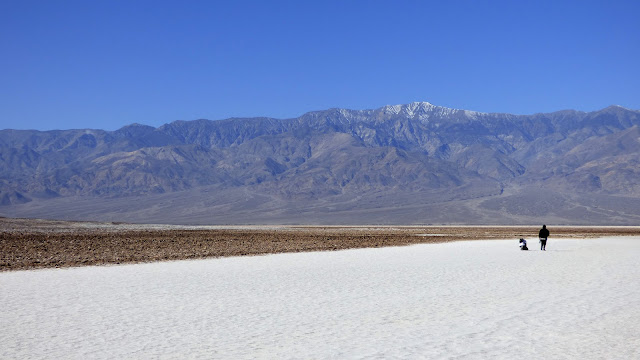 And imagine the end. Imagine the moment that the Atlantic Ocean began seeping over the Strait of Gibraltar. Seepage that turned into a torrent, and then a torrent that turned into a flood, and a flood that turned into a deluge beyond imagining. Some calculations suggest flows equivalent to 1,000 Amazon Rivers at once. The entire ocean basin could have filled in between a few months to two years. Sea level would have risen as much as 30 feet per day. This event is called the Zanclean Flood.

All in all, this place would have been hell on Earth, at least until the waters came...


PS: The Rhone River, not the Rhine. Correction made, thank you Olivier Malinur.
Posted by Garry Hayes at 11:06 PM

The hottest I've ever felt at Furnace Creek was 129. Once you get over 105 or so you really can't tell the difference. It's just hot.