Mrs. Geotripper Faces Down the Wolf: Musings on the Canids of the Great Valley

They've always been here, even though we declared war on them, and have tried to exterminate them out of existence. No doubt they're been preying on our chickens, our sheep, our calves, or whatever, but they were here first and we were the interlopers, the invasive species. We came and plowed under the prairies and river floodplains that were the ancestral homes of these creatures.
They've been here ever since the prairie rose from the sea sometime in the last 10 million years. At that time, volcanoes still erupted at the crest of the Sierra Nevada, sending lava flows and volcanic mudflows (lahars) down the western slope. The rock layers today are called the Mehrten Formation, and those rocks are the focus of a study published this week by among others, my colleague at CSU Stanislaus Julia Sankey, and a former student of mine, Jake Biewer. They were looking at the fossil canids reported from the Mehrten, and their work shows that the ecosystem at that time included at least four dog ancestors. There were two borophages (a primitive "bone-crushing dog" that is now extinct), an ancestral fox, and Eucyon davisi, a canid that is considered to be an ancestor of today's coyote. 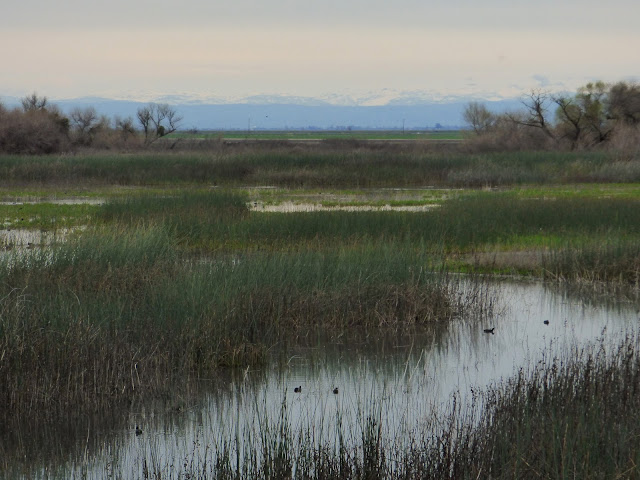 During the ice ages, the ecosystem was dominated by Dire Wolves and Sabertooth Cats, but fossil discoveries show that the coyote was present as well 700,000 years ago. The big wolves and sabertooths could attack and take down the large grazing animals of the time, the camels, horses, and bison, but there was always a place in ecosystem for the smaller predators that could live on rabbits, rodents, and large birds. 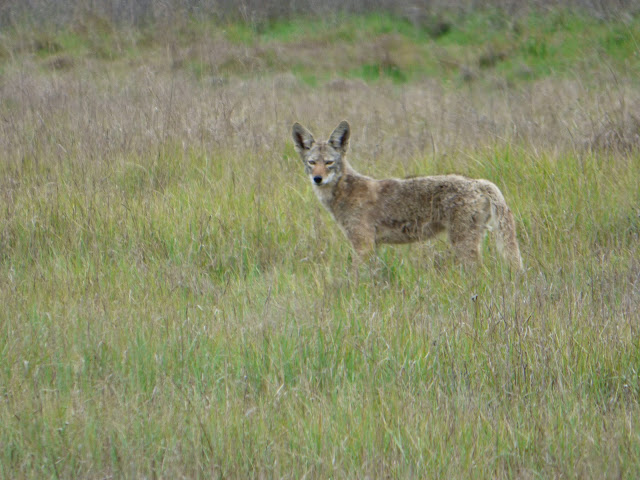 At the end of the last ice age (or with the arrival of humans; there is a debate), the megafauna, the large grazing animals like the bison, the mammoth, the camel, the horse, and the sloth went extinct. Deprived of their prey, the large cats and Dire Wolves also disappeared into oblivion. But there was always a place for the coyote, and they prospered in the newly changed world. As humans moved into their environment, they adapted, and have continued to survive despite the war against them waged by ranchers. 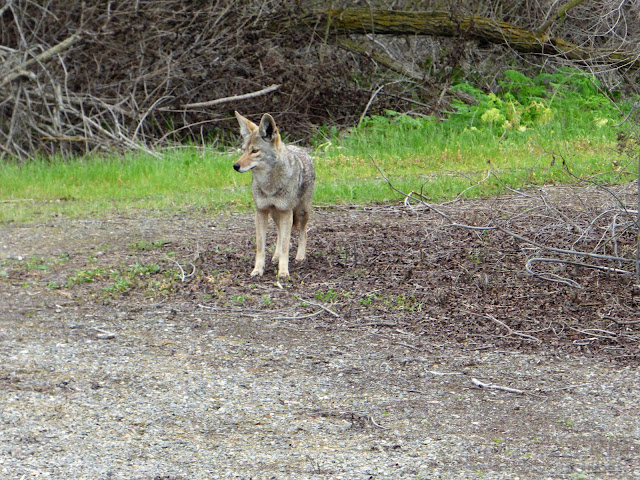 So this thing happened today. Mrs. Geotripper and I were doing something we love, exploring the local wildlife refuge (the San Luis National Wildlife Refuge Waterfowl Auto-tour). We were looking for birds as we usually do, but I had just seen the article about the canids, and so I was also watching the prairie for coyotes (or foxes, I wasn't being choosy). And we saw one! It was wandering the grassland, and stayed close enough that we got pictures and video (below). We drove on. Towards the end of the auto-tour there is a hiking trail to a viewing platform. We got out and walked the trail.

Mrs. Geotripper and I have opposing methods of seeking birds. I like to cover as much ground as possible, constantly moving, while she prefers to remain stationary, letting the birds come to her. Both strategies work for us, and we usually get a different set of bird discoveries. So it was that she was situated on a folding chair at a bend in the trail, and I was a quarter mile away at the viewing platform. We were sort of nonplussed at a sign at the trailhead warning of Mountain Lion sightings, but we had phones so we could stay in touch.

I was up on the platform and was startled, yet pleased to see a coyote go loping by at a fast pace. I'm not even sure it saw me, because it never looked my direction. I snapped some pictures, including the ones above and below, as well as the opening picture at the top of the post. I paused and realized the animal was headed down the road towards Mrs. Geotripper's viewing spot, so I figured I would text her a warning. It read (and I quote): "Coyote might be running your way". 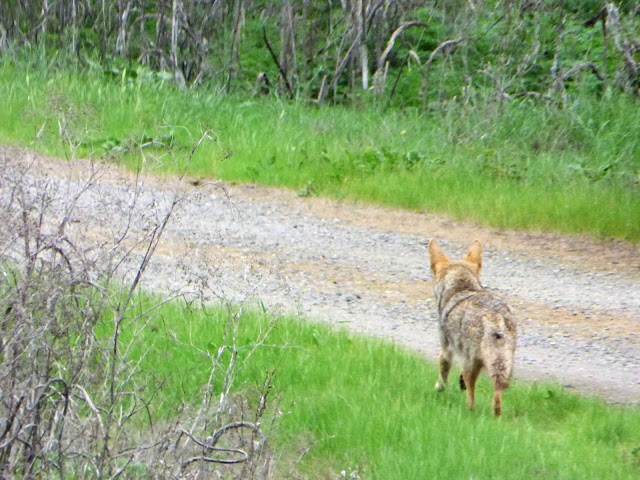 She didn't get the text.

The coyote was faster than my fingers and the mysterious ether of the internet, and so from Mrs. Geotripper's point of view things were a little different. She was photographing a Spotted Towhee, (and thinking just a little bit about mountain lions), when she heard something running through the underbrush. She thought "rabbit", but realized it was bigger. Much bigger. And it was coming closer and closer, and she couldn't see it.

Meanwhile, the coyote was taking a shortcut, probably one that it always took, and wasn't really on the hunt, so it wasn't trying to be stealthy. It was just in a hurry to get to wherever it was going, and it ran into the clearing that it always ran into. And found a large creature in the way.

Both of them were too shocked to react for several seconds, but to Mrs. Geotripper's credit, she didn't scream or panic. She just stared, uncertain what the heck to do next. Luckily, the coyote blinked first and ran down the road as fast as it could go. And then Mrs. Geotripper heard her phone ping with the message I had just sent.

She and I had just encountered a bit of the ancient world that existed long before we did. The wolves and coyotes (and domestic dogs) are closely related creatures, and are even capable of interbreeding. That gives them an incredible advantage in a changing environment, whether rapid climate change like the ending of an ice age, or the invasion of their lands by a new species that is as intelligent and crafty as they are. They can adapt quickly, and that's how they have survived for millions of years against many challenges.