Why "short"? What deluge? Hasn't this been another dry year?

If you've been reading over the last year, you would know that I started what I thought would be a short blog series (Liveblogging the Deluge) on what looked like (and almost was) a record-breaking atmospheric storm that hit California last January. The storm hit, and then there was another. And another. Prodigious amounts of snow and rain fell in central and northern California through the end of April, putting an end to California's historically bad five-year drought, and filling the state's dry reservoirs. So much snow accumulated in the drainage of the Tuolumne River that the main reservoir, Don Pedro, was constantly at the edge of overflowing, so the outflow was maintained at near flood-level (averaging 9,000 cubic feet per second, briefly to 15,000 cfs) through July. We really had no chance to see the changes on the floodplain until September.

And then...when the "storm door" was supposed to open in November, barely anything happened. My backyard gauge told the story: October, 0.07", November 1.15", December 0.0". January finally brought an almost normal amount, 3.44", but the next month was one of the driest Februarys ever recorded, with my gauge recording a mere 0.37". Statewide, the snowpack was a mere 20-25% of normal. At Don Pedro Reservoir, there was a lot of water in storage, but realizing that there would be almost no snowmelt, the operators kept the outflow into the lower Tuolumne River at very low levels, about 300 cubic feet per second. They left a minimum of space for emergency flood control.

And then March happened. The storm door opened in a big way, and three major storms blew through the state raising havoc with floods and mudflows in numerous localities, including some of the areas affected by the horrific fires of last summer (and December, unfortunately). Locally, we received 3.36", but my little town was one of the driest spots in the state. The snow in the Sierra Nevada was measured in feet, including 7-8 feet in a few places.

It wasn't a drought ending month, but it took the snowpack from disastrous to merely disappointing. Current levels range from 44% to 66% of normal. And now the operators at Don Pedro Reservoir can expect some runoff amounts that will be semi-normal. That means they'll need a bit more reservoir space.... 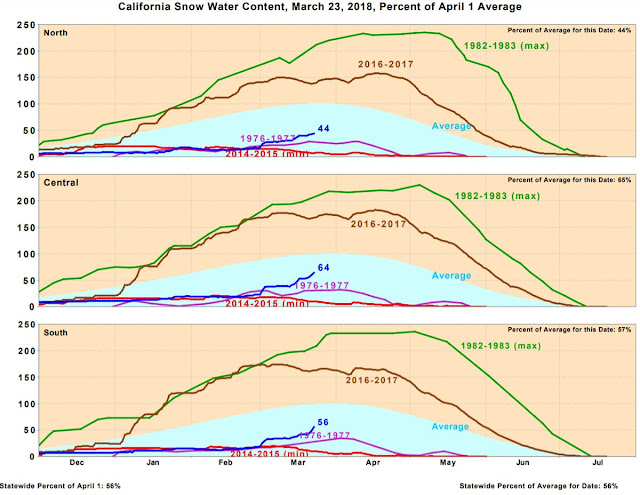 I noticed the first ramping up of river flows about a week ago, when the discharge was tripled to about 1,000 cubic feet per second. I could hear the river again (the velocity of the water at 300 cfs is very low). But then when I walked the river trail yesterday, the river was raging along at 4,500 cubic feet per second. Not a flood, but a higher level than at almost any point during the entire run of the 2012-2017 drought. The islands and gravel bars that were being used by fisher-people and picnickers were once again underwater. The slough at the west end of the Parkway Trail where I walk was once again flowing. This is good on a number of counts: salmon and other fish will have a better chance of survival and getting to the sea, and the invasive weed river hyacinth will probably not gain root in the upper areas of the river. The river weed choked the slough and parts of the river channel during the drought, smothering out other vegetation, and making life difficult for fish and aquatic wildlife. 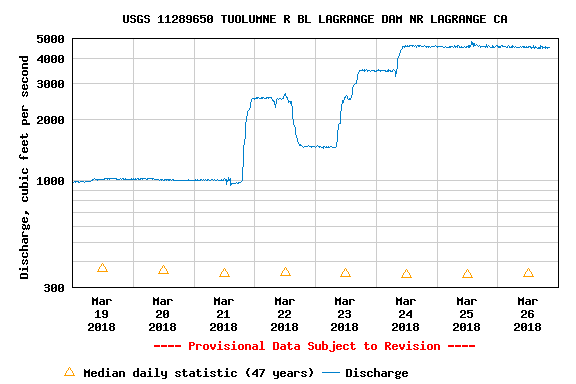 Farther afield, the outlook is reasonably good. Most of California's reservoirs are at or well-above normal (flood-damaged Lake Oroville is an exception at 75% of normal). Don Pedro came up at least 8 feet during the storms in March. 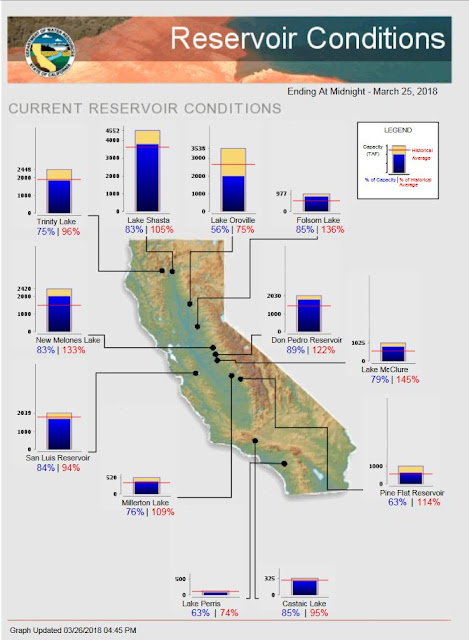 While good for the snowpack and reservoirs, the storms did a lot of damage. Roads were washed out in numerous places in the foothills of the Sierra Nevada. We almost lost a smaller reservoir on Moccasin Creek. In the end, the "Deluge" was a lot shorter than the one we got last year, but in a year as dry as this, it was good to have a little extra water "in the bank". With the uncertainties related to global warming, and the expectation of future extended droughts, every drop counts.
Posted by Garry Hayes at 10:45 PM