The Unsung Waterfalls of Yosemite Valley 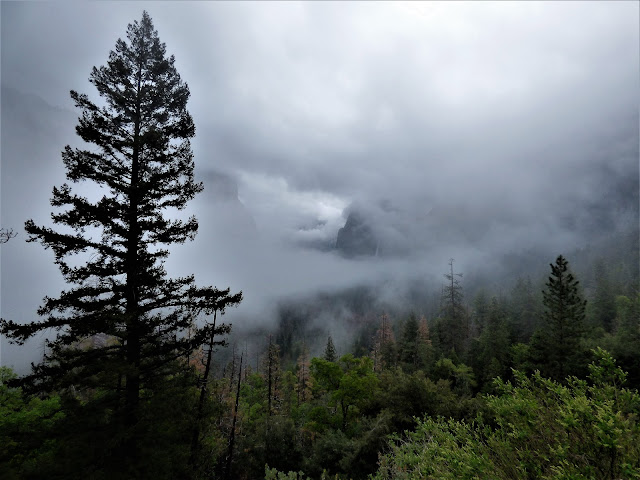 One takes their chance when deciding to visit Yosemite Valley in the springtime. The storms of winter are never quite done by then, and you may find yourself in a valley full of clouds. That's where I found myself a week back, touring the Yosemite region with my students. It had been two weeks of no precipitation, but on Saturday, the storms came back for a day.
So it was that we were playing hide and seek with the iconic peaks and waterfalls of Yosemite. We did get to see most of them, with Half Dome being the notable no-show. Still, clouds add a wonderful aura of mystery if they are scattered enough to reveal bits and pieces (like a feather boa dancer). It's on such days that a person can realize the full richness of waterfalls in Yosemite.
Yosemite is famous for Bridalveil Fall, Yosemite Falls, along with Nevada and Vernal Falls on the main channel of the Merced River. But in spring when the snowmelt is high or if there is heavy rain, the valley walls come alive with falling water. Sentinel Falls (above) would be world-famous were it not on the valley wall opposite Yosemite Falls, and if it didn't dry up most years before June. It falls 1,920 feet in a series of drops, of which the longest is about 500 feet. There is an equally high fall to the west.
Royal Arches Cascades are on the cliffs behind the Ahwahnee Lodge (currently called the Grand Majestic or something like that). They have a total drop of about 1,250 feet. Unlike most of the others, it's not overly hard to scramble to the base of the falls in the forest east of the lodge.
A number of times I've been eating pizza at Curry Village (now called Half Dome Village because of a copyright fight), and noticed the sound of falling water. A little searching of the cliffs reveals Staircase Falls, which drop over a series of jointed ledges of granitic rock below Glacier Point. They total 1,300 feet, but like the others they are often dry by early summer.
There are lots of other waterfalls to discover this time of year. These are just the ones that chose to reveal themselves to us during our brief visit under the clouds. You'll be able to find plenty of others if you can get here.

I'm hard put to describe my favorite time at Yosemite Valley. Winter, for the snow and the quiet, spring for the greenery and the Dogwoods blooming and the full waterfalls, fall for the bright colors, or summer for the access. If there is a least favorite time, it's probably August when the crowds are at their greatest but the waterfalls aren't. But you know what? It's worth a visit any time you can get there. 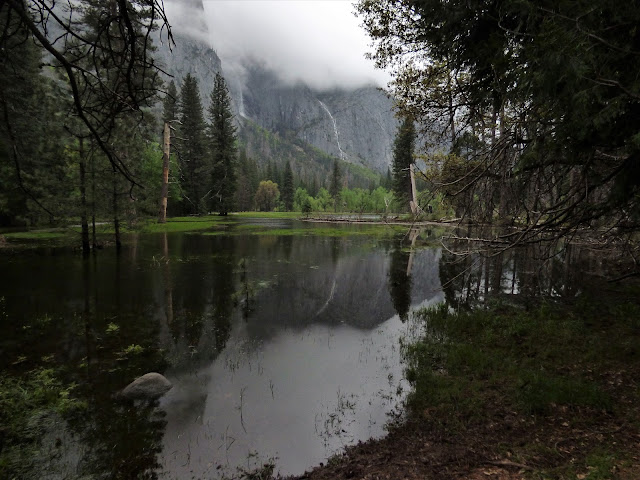 No matter how many times I've been, with and without you, you always manage to capture it so my heart longs to be there <3