A Flight Around the World's Highest Mountains: Mauna Kea and Mauna Loa 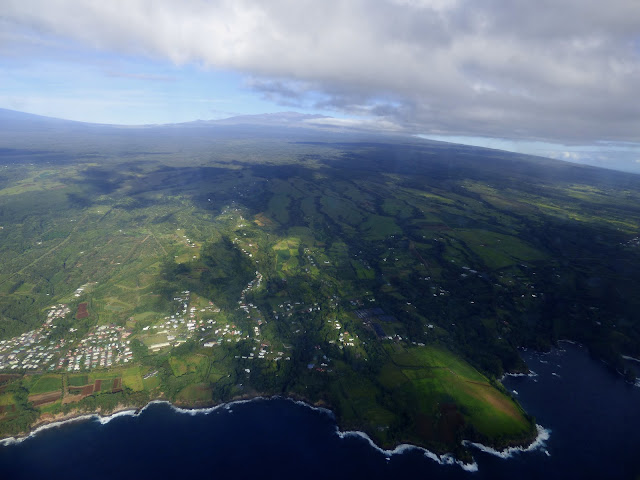 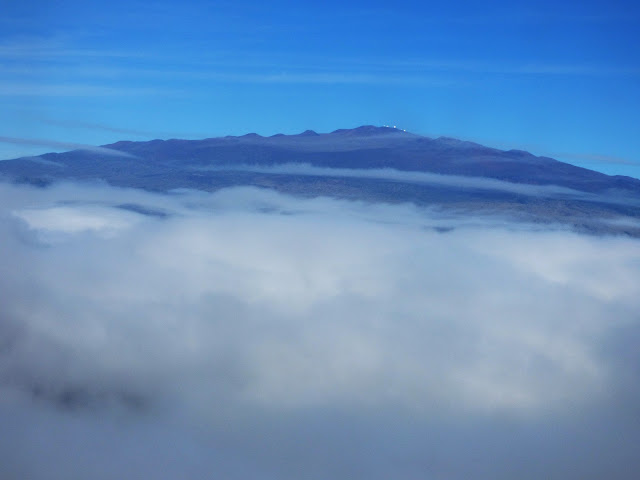 I'm not talking about Mt. Everest in the Himalayas. It's tall of course, just over 29,000 feet above sea level. But if one measures from the base of the mountain on the sea floor, Mauna Loa and Mauna Kea on the Big Island of Hawai'i are around 32,000 feet high (Mauna Kea edges out Mauna Loa by about 120 feet). The two giants are nearly 14,000 feet above sea level, and they rise in the middle of the northeast Trade Winds of the Pacific Ocean. They are often clear for a few minutes in the early morning, but the clouds can build quickly, obscuring the view. During our field studies trip in 2016, we had been exploring for five days before the students even saw Mauna Loa at all. 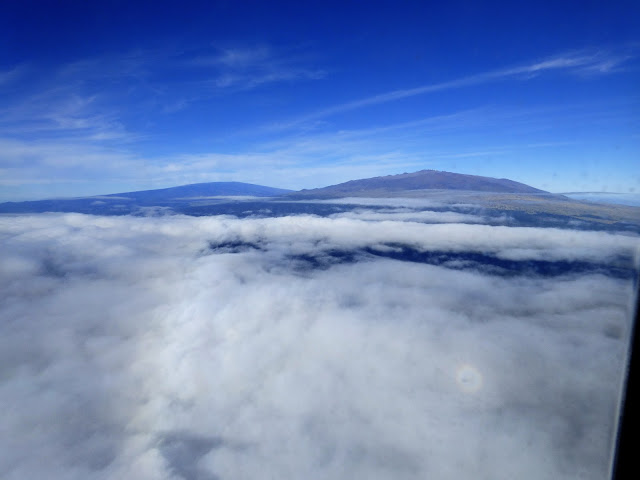 I've been privileged to visit the Hawaiian Islands eight times now, and that means there've been a few chances to see the great shield volcanoes from above as I've arrived or departed from the islands, but none of them was like the scene that presented itself to me this morning. We had an early flight, and for once I was on the correct side of the plane (for the record, on flights out of Hilo you want to be on the left side of the plane). There were just a few clouds on the northeast side, but we flew through them and soon the entire north flank of Mauna Kea was spread out below. 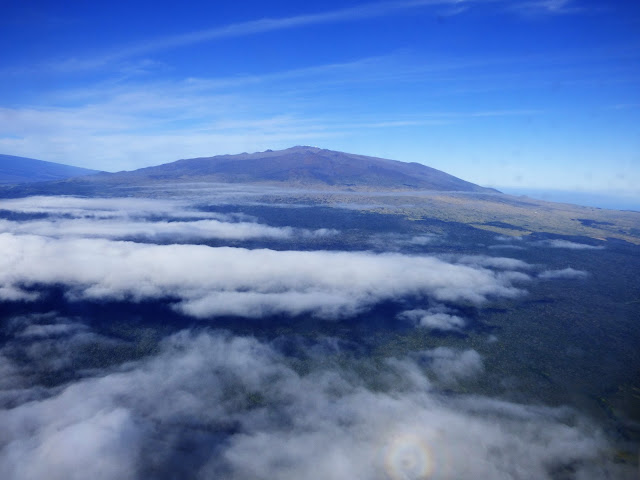 These mountains are astoundingly big. They formed from hundreds of thousands of eruptions of non-viscous (easily flowing) streams of basaltic lava generated at a "hot spot" in the earth's mantle hundreds of miles beneath the surface. The outer lithosphere of the earth slides over the hot spot, carrying earlier-formed volcanoes to the northwest. Kauai, Maui, and Oahu were all once large shield volcanoes like Mauna Kea and Mauna Loa, but they have subsided and erosion has ripped into their flanks. Mauna Kea and Mauna Loa will eventually suffer the same fate, and in fact Mauna Kea hasn't erupted in several thousand years (a number of very expensive telescope dot its summit). Mauna Loa is still highly active, having erupted in 1984. I wouldn't be shocked if it erupted again tomorrow (which would be the karma of just having left the island).
These mountains aren't just fascinating as geological entities. They are also biological refuges. There are hundreds if not thousands of rare and endemic species of plants and animals in the forests on the flanks of the mountains. There are few environments like these on the planet, a slope that climbs from beaches to tropical rainforests, temperate rainforests, high deserts, and alpine slopes. One can see from the patchwork of cleared forests on the flanks of the volcanoes that we have severely affected these unique environments in order to raise cattle and goats. Many species, especially birds, have been lost, and other are barely hanging on.

It was a fascinating flight around the summits of the world's highest mountains!
Posted by Garry Hayes at 1:12 AM