The Hawai'i That Was: The Final Refuge 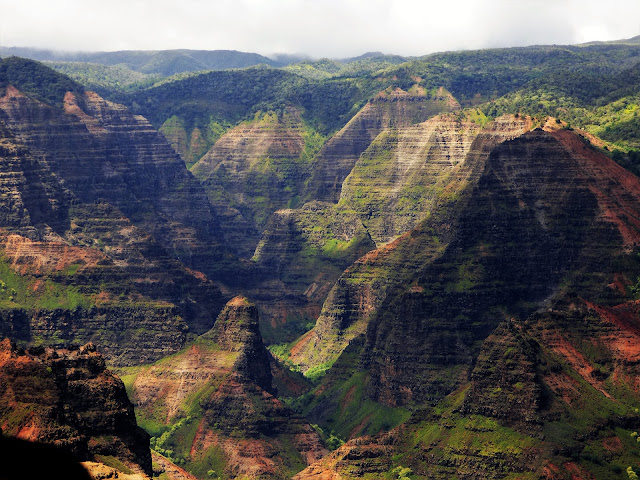 Kaua'i broke, if not in half, then certainly something close to it. The entire summit of the Kaua'i volcano slipped downward along a fault four million years ago, causing streams to change their direction and causing the erosion of the spectacular gorge of Waimea Canyon. In places it is 3,000 feet deep, enough that it has been christened the "Grand Canyon of the Pacific". In our last post, we "earned" our first look at the canyon from the end of the hike at Cliff Trail Lookout. 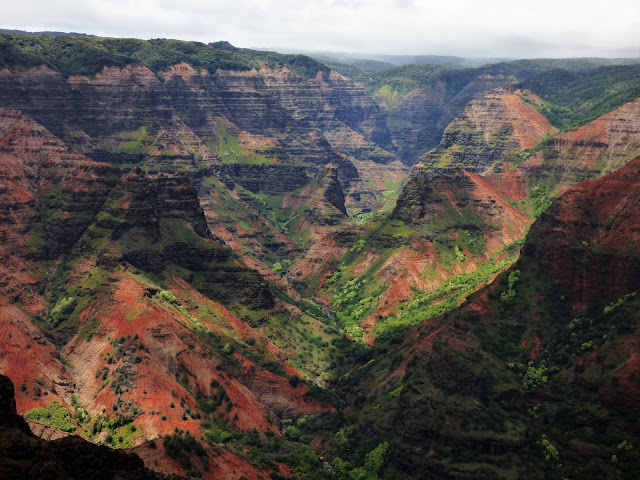 Having read that post (okay, go back and read it!), you too have "earned" your right to enjoy the superlative views from several pull-outs from the highway leading to Koke'e Park. The class had ended and most of the students headed home, so Mrs. Geotripper and I stole away for one last visit to the canyon and the high-altitude rainforest above. It was late in the afternoon, and the sun's shadows were lengthening, bring the canyon into sharp relief. There's a story here, both in the geology, and in life. This place is a refuge. 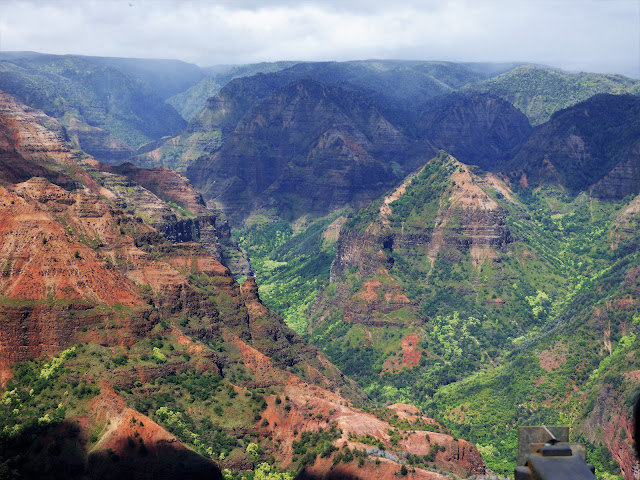 This entire series has been an exploration of the "Hawai'i That Was", the geology, natural history, and human history of these beautiful islands in the middle of the Pacific Ocean. Over and over, we've seen examples of vast changes that have taken place in the natural landscape of the islands. 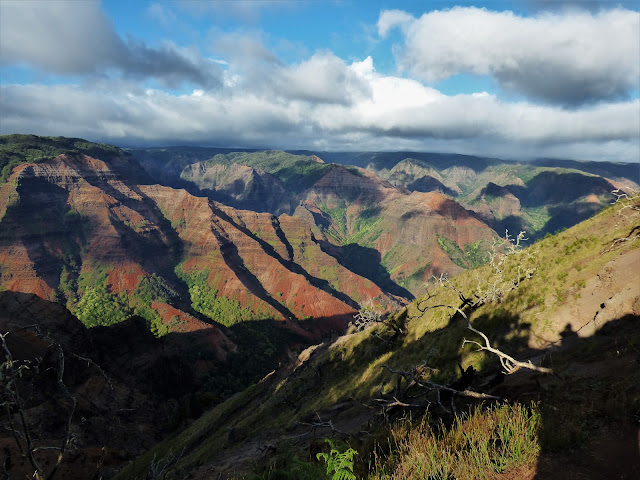 When Tahitians arrived on the islands many centuries ago, they quite probably were not the first humans. Legends have persisted of a race of magical "little" people called the Menehune. There is speculation that these people had arrived from the Marquesas Islands some time before the Tahitians, and they were driven into the hills and forests under the relentless advance of the colonizers. They eventually disappeared into dim legend. Their diminutive stature may have been a case of victors making the history by belittling the conquered. 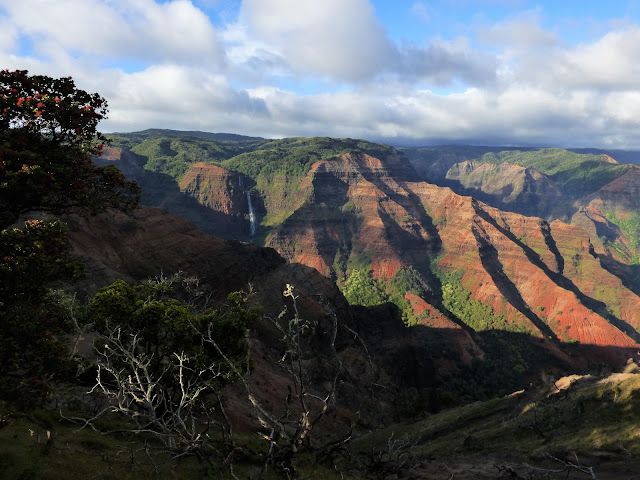 Waimea Canyon is the setting for a more modern invasion and retreat. The arrival of first the Tahitians and then the Europeans set the stage for a devastating blow to the native flora and fauna of the islands. The colonizers brought invasive plants, rats, and disease-carrying mosquitos. They brought goats and pigs. The coastal zones were the most affected, as that is where the humans mostly settled. The birds bore the brunt of the attack. Bird malaria wiped out nearly all the native birds along the coast to the extent that settlers bemoaned the lack of bird songs. They brought birds from elsewhere for a variety of reasons, but they inevitably drove out any remaining native birds. Most visitors never see one. 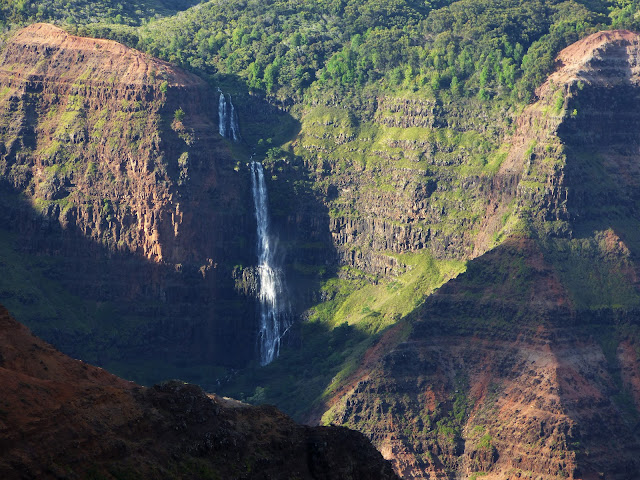 The natives hang on in the highest reaches of Waimia Canyon and in the Alaka'i Plateau in the highlands above. It's too cold for the mosquitos, so malaria has not yet arrived. They've established a final refuge in the high forests like the Menehune before them. I look at the 800-foot-high Waipo'o Falls and can't help but think of the adventure stories like Lost World and King Kong. 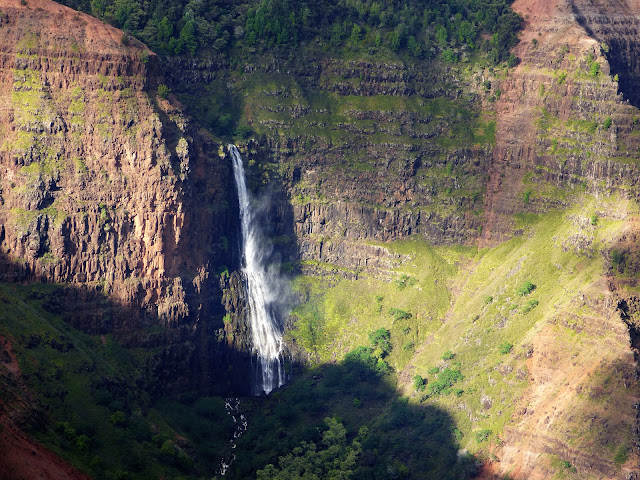 Some of the native birds are on the verge extinction like the dozens of species already lost, but others have stable populations, at least for the time being. They face new threats, not the least of which is global warming. The new leaders inhabiting our federal government may deny it, but warming is continuing and the islands are changing. There will no doubt be changes in the frequency and intensity of storms (one rare typhoon, Iniki in 1992, actually caused the extinction of one or two species of bird). The greatest threat may be the expansion of the mosquitos into the high country refuge. There may be nothing that can be done to save the last of the natives, and they will, like the Menehune, disappear into legend. 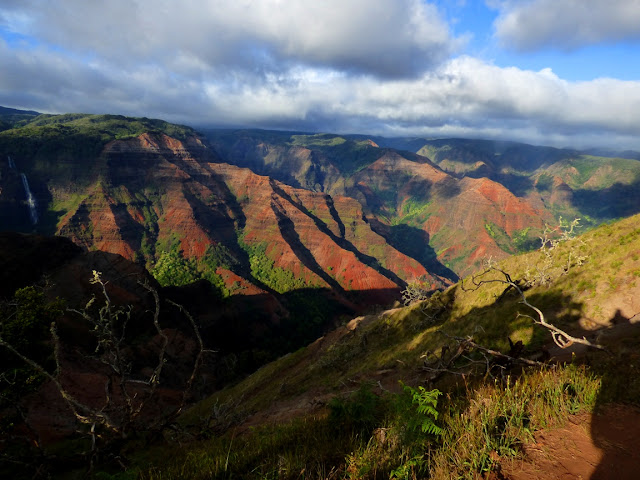 I hope it doesn't happen. I'm driven to write on nature and environment by the hope, however tenuous, that my words and the words of many others like me, the teachers, the professors, and the researchers will break through to those who hold the power and influence. That can only really happen if the people in our society take action, much like the March for Science, and the March for Climate. A difference is being made. I've seen some isolated examples of politicians changing their critical votes because of public pressure. I hope it can continue. 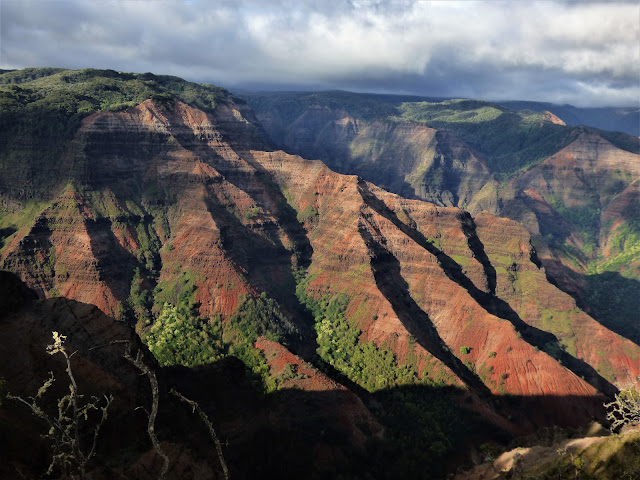 In the meantime, our story has come full circle. We arrived on an island known for palm trees and coral sand beaches and Hula dances, and hopefully discovered a rich and varied ecosystem influenced by powerful geologic forces. We explored the youngest part of the islands, the newest lands, and made our way onto the oldest and most eroded island. And so we wrap it up. Look for a post very soon that will link to all of the stories in this series. 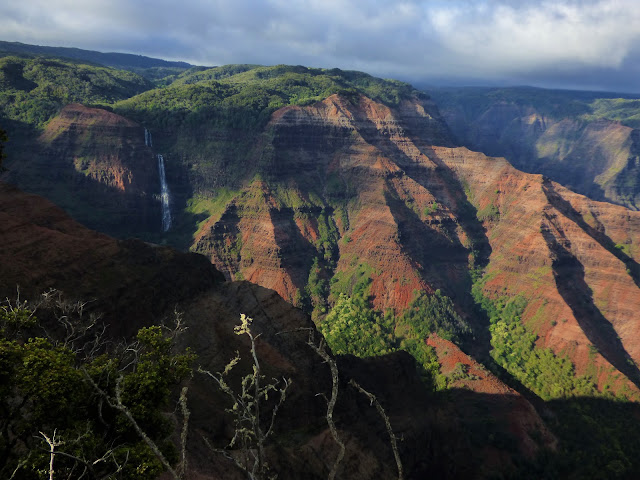 There may be an addendum before long, however. The Cordilleran Section of the Geological Society of America is meeting in Honolulu in a few weeks, and I'll be there. I'll be exploring a bit of Oahu, as well as some new sites on the Big Island. I may have some more material to add before long! 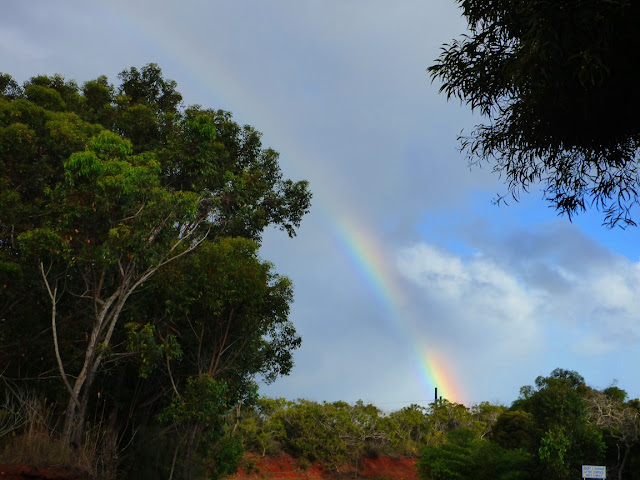 We reached the coastal plain in a brief rainstorm and were treated to a final rainbow. We headed back to the hotel and packed. We had a plane to catch in the morning.
Posted by Garry Hayes at 10:42 PM