The Hawai'i That Was: Waimea Canyon, the View You "Have" to Earn... 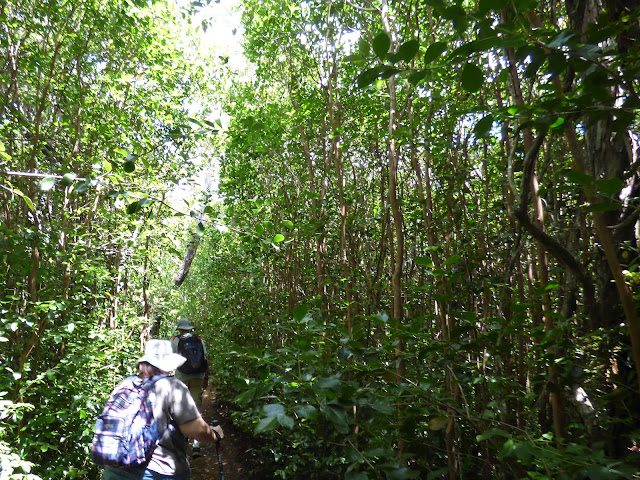 You may be utterly surprised by this, but I was kind of a strange kid. I loved the outdoors of course, and was absolutely fascinated by geography, and when I learned about topographic maps in the scouts, I had found my calling. I liked seeing the big picture and climbed every mountain I could get to through my teen years, always looking for the better view. And I developed kind of an odd ethos...I figured the quality of the view was directly in proportion to the effort required to achieve it.

Take for example the classic scene from the classic cinema experience that is "National Lampoon's Vacation". Clark Griswold appears to have not appreciated the incredible scene before him at the Grand Canyon. Now it's true that he technically just robbed the hotel and he's a wanted man, but still one feels that maybe his life would have been enriched if he had taken a few moments to explore the rim, take a trail down a little ways, maybe purchase a book that explained something of the geology (with the cash that he stole). Well, maybe that's not the best example... 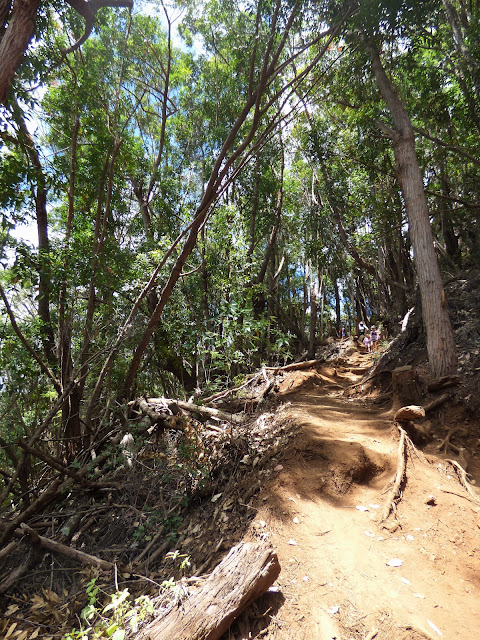 Let's try this example instead. When I was a teen in the scouts, we did a backpacking trip to Santa Anita Canyon, and after we established our camp at Spruce Grove I and a few buddies started the long climb to the summit of Mt. Wilson, one of the significant peaks in the San Gabriel Mountains. We struggled up the mountain for hours, carefully making our way around snowbanks and trudging up switchbacks. We made it to the summit and the view was breathtaking. It was a rare smogless day and the entirety of the Los Angeles Basin lay at our feet. We could even see Catalina Island out on the horizon. We were enthralled, despite being teenaged boys (parents weren't there so we didn't have to act up). It was about then that we noticed that we were in a parking lot and we were surrounded by bored-looking people. They had driven up the Angeles Crest Highway and were visiting the observatory and the small theme park that used to be up there. Hardly anyone seemed to be taking in the view. 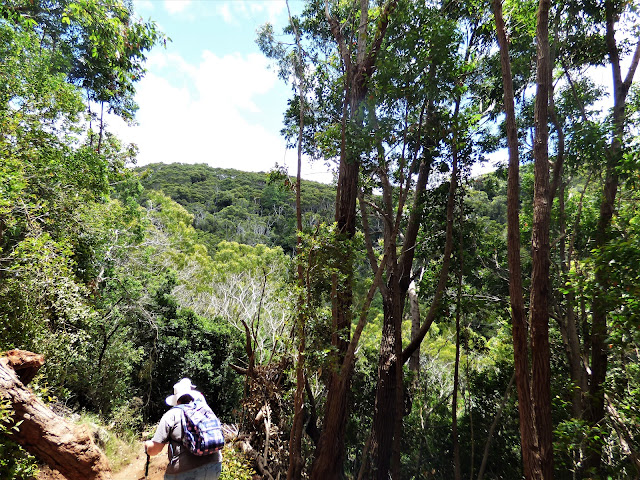 What does that have to do with Hawai'i, you ask? As some of you may recall, I spent a fair part of the summer and fall working on a series about the Hawai'i That Was. It was an exploration of the geology and anthropology of the Big Island and Kaua'i, and it was going just fine until I got distracted the 2017 Deluge that engulfed California, as well as our journey to Death Valley. I wasn't that far from finishing the main part of the series, but it has been several months since I posted anything. So we come to today's post. 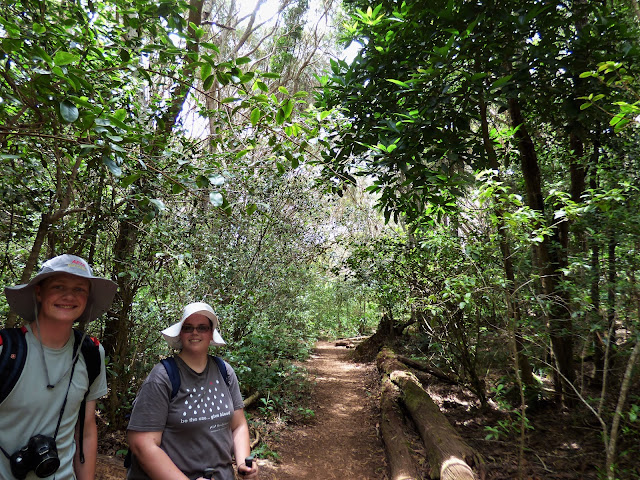 We had been talking about the oldest of the main islands of Hawai'i, Kaua'i. We had explored the shoreline roads and the hike to the Alaka'i Swamp, but I was saving the best part for last. When one runs through the stereotypes of Hawai'i, there are the beaches, the palms, the volcanoes and all that stuff, but one doesn't normally think of incredible deep and rugged canyons. But that's what is present on the relatively small island of Kaua'i: a canyon so scenic and deep that it has been called the Grand Canyon of the Pacific. Geologically, it shouldn't be there.

What's that all about? All of the islands grew as large basaltic shield volcanoes, and as they moved off the hot spots the islands subsided and underwent severe erosion. Sometimes large landslides erased large portions of the islands, and started a sequence of erosion that produced rugged canyons, but there is nowhere in the islands that is anything like Waimea Canyon. In places it is 3,000 feet deep, almost 60% of the depth of the "real" Grand Canyon in Arizona. On such a small island it can't be very long, only ten miles or so, but the exposures are spectacular. But it tells a strange story. 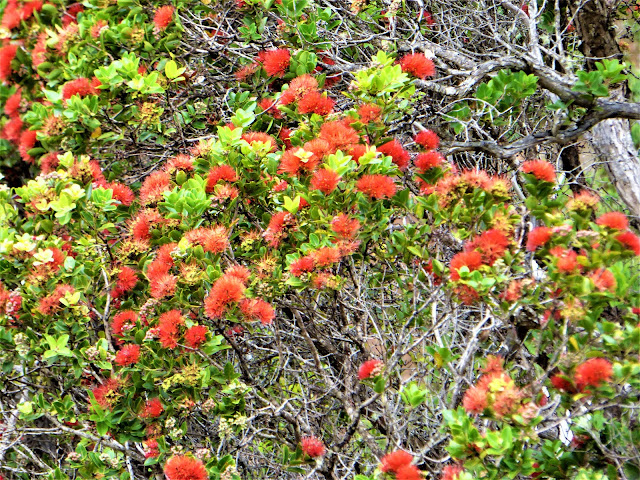 The original volcano grew to an elevation of perhaps 8,000 feet, and would have been a relatively circular edifice. It emerged from the waves about 5 million years ago, but about 4 million years ago the volcano destabilized and much of the summit, perhaps two-thirds of the entire volcano slipped, but did not collapse into the sea. It simply shifted a few thousand feet and stopped. Water courses that used to flow west towards the ocean were shifted to the south instead, along the fault. The canyon grew despite the growth of another shield, and eventually Waimea Canyon emerged as one of the deepest island canyons in the world.

There is a paved highway that leads to several spectacular overlooks, but there was a stubborn part in my psyche that insisted that I had to earn a view of the incredible gorge. I missed doing the hike on a previous trip because one of my students broke a finger and needed to be transported to a medical facility. This trip, it was finally going to happen, but I had strained a ligament or tendon in my foot, and I was, much to my chagrin limping badly. I actually had a cane, but it wasn't going to stop me. I was going to hike to the Waimea Canyon Overlook. I started hiking with Rebecca and Thomas (most of the other students opted to go shopping or snorkeling one of the coral reefs). It was a fascinating journey through the high altitude rainforest. We saw some of the native birds and vegetation, aa well as some non-native invaders, the goats (I'm just glad it wasn't one of the wild boars). The goats and boars have done immeasurable damage to the forest and their control is a continuing problem. 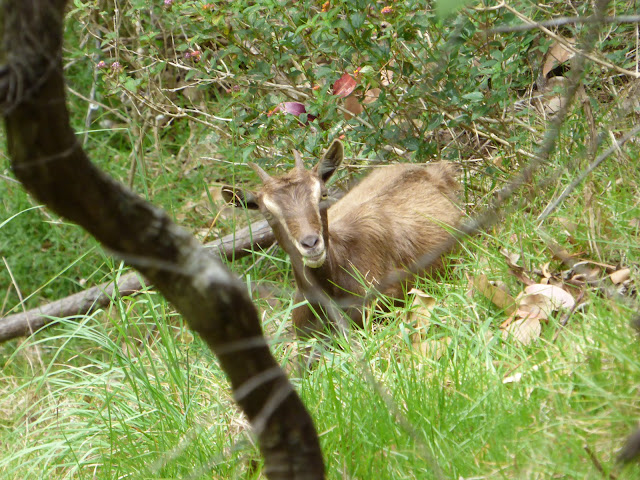 I stumbled into a clearing and had a view down the canyon where we could see the basaltic lava flows (originally black but weathered red and brown because of the high iron content. In places we could see the vertical dikes of basalt that once fed eruptions at the surface. 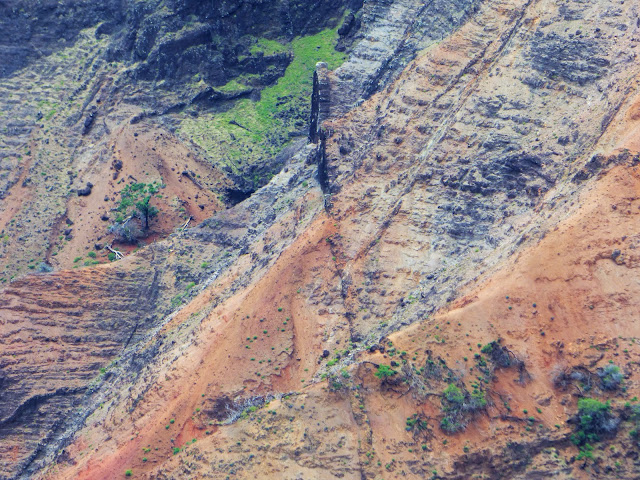 Little vegetation covered the slopes, as they were so steep that soil couldn't form quickly enough to support plants before being eroded down the canyon. 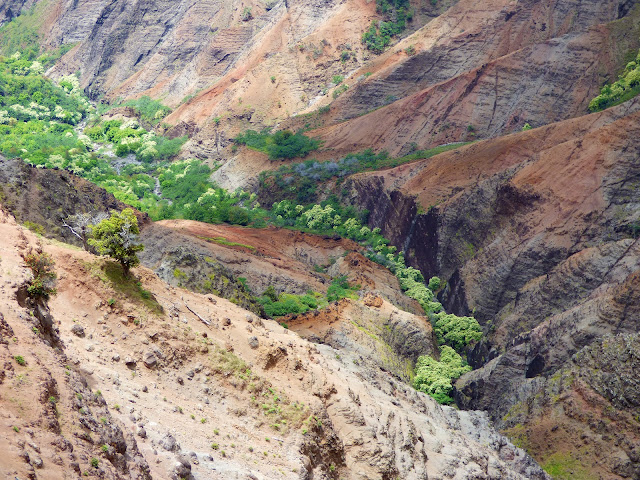 The forest ended abruptly, and the world fell away before us. I briefly forgot my aching foot to take in the incredible sight. True to my teenage ethos, I had (painfully) earned this view! Now maybe you can't get to islands, or maybe a disability might prevent you from doing a hike like this, but one can earn a view in a different way: education. Learning the reason for the landscape provides a richness to the experience of seeing it. It's not just colors that lie before you. It's a long history of one eruption after another, followed by earthquakes, faulting, landsliding, weathering and erosion. Research into the native legends provides a human perspective to this natural wonder. 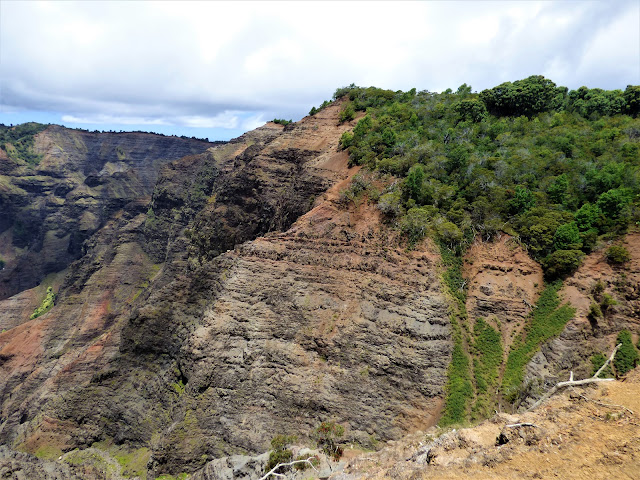 And that means that you, dear reader, have earned the view at last (this is because you still happen to be reading)! This is Waimea Canyon on Kaua'i, the so-called "Grand Canyon of the Pacific", one of the most stunning places on planet Earth (as far as I am concerned). We first see the view towards the horizon to the south in the lower reaches of the canyon. 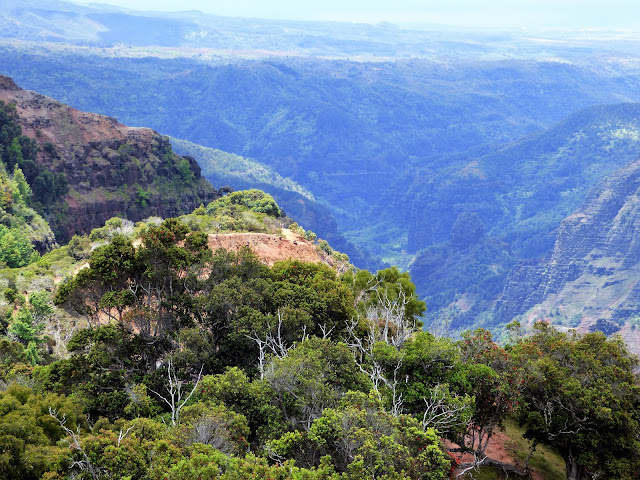 Then we see the dark gorge that lies at our feet. 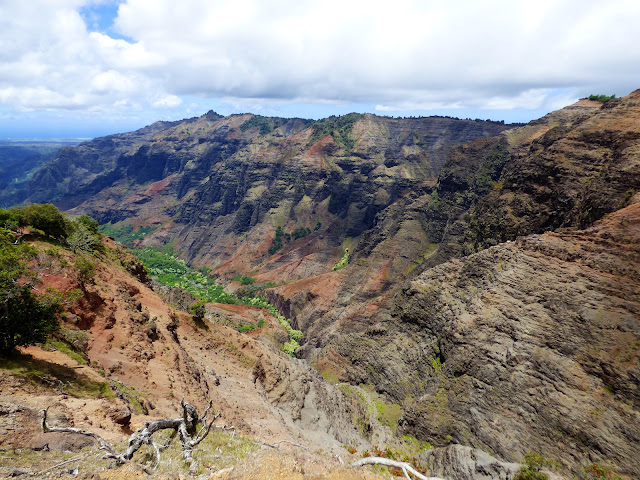 Now, it's true that our panorama is limited somewhat because I wasn't able to go any farther because of the foot pain. Another half mile would have put us at the top of a stunning waterfall, but that will be something to look forward to next time.

Mrs. Geotripper and I made one more trip to Waimea Canyon before we ended our journey to the islands, and we saw awesomeness. Those pictures will be the subject of the next post

I made that same boy scout hike to that camp many times and once to the top of Wilson. Have mountain bicycled up it twice too, but never driven. And google terrain maps are pure eye candy.