Volcanoes in the Mist (and underground): Travels in Death Valley 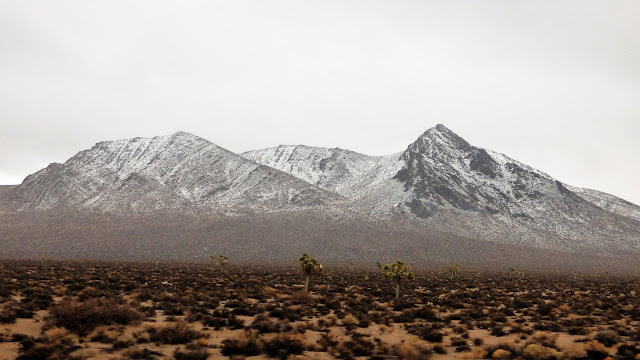 The Inyo Mountains, in any other setting in the world, would be considered a major mountain range, preserved as a national park perhaps, and celebrated as scenic wonderland. But just like an accomplished sibling overshadowed by a more famous brother or sister, the Inyos lie across the valley from the most spectacular part of the Sierra Nevada, and south of the higher White Mountains. For better or worse (mostly better), only a few roads penetrate the range, including the main western highway into Death Valley National Park, State Route 190. That was the road we followed on our recent exploration of Death Valley. 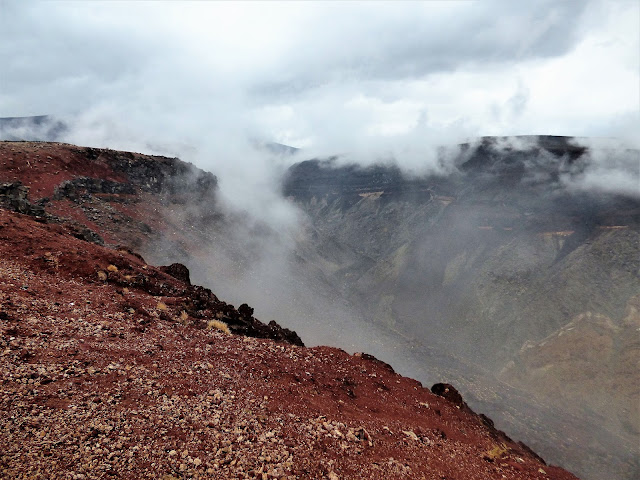 As was noted in the previous post, we attempted our trip during the Bombogenesis storm that wreaked havoc across Southern California. This kind of storm can often result in disaster as highways get closed or damaged by landslides, but we were lucky and were able cross the Inyo Mountains and Darwin Plateau without problems. But we did get the opportunity to see some great geology, and even were able to add a new stop to our itinerary (because we missed a different one, but I'm not complaining).

Our first sight as we approached the mountains was the snow covering the desert peaks (first picture above), a hint to the seriousness of the storm we were challenging. The tilted rocks are Paleozoic-aged (300-550 million years) limestone layers. They recall a time when California was very different, completely submerged under a shallow tropical sea. We would be seeing more of these fascinating rocks later on. The road crossed the flat uplands of the Darwin Plateau, and then plunged down a steep incline towards the Panamint Valley.

We actually had fog in this arid environment, since the clouds were crowding against the edge of the steep mountains. As we passed the Father Crowley Vista Point, the clouds briefly parted and we had a view into the deep gorge of Rainbow Canyon. At this point, the slopes and flats are covered with basaltic lava flows ranging in age from 8 to 4 million years old. The immediate question becomes, why volcanoes? Why right here?

In a sense, volcanism is possible almost anywhere on the planet. It's not that there is magma everywhere, but that a hundred miles beneath our feet there is a zone, the asthenosphere, where the rock is almost molten, but not quite (perhaps 5-10% liquid). To melt this rock and create volcanic activity would require raising the temperature (as happens at hot spots like Hawai'i), or releasing pressure (pressure keeps the rocks from melting in the same way that pressure cookers prevent water from boiling). There aren't any hot spots in the immediate vicinity, but the crust across the Basin and Range Province has been stretched and thinned, allowing pockets of basaltic magma to form and rise into the rocks above, often following fault zones to the surface. 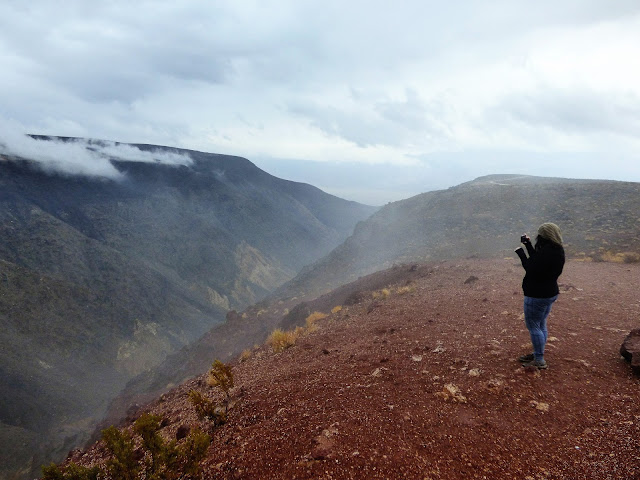 Although we couldn't see it through the clouds, there are basaltic lavas across the Panamint Valley that are of the same age and the same exact composition as those at the vista point. In addition, the rocks across the deep valley have no obvious source (the picture below is from last year, a decidedly drier trip). The best explanation for these rocks is that the lavas flowed across an original surface that was later broken up by faulting when the Panamint Valley formed. Since the youngest volcanic rocks are just 4 million years old, the Panamint Valley is younger still. The Panamint Valley is more than a mile deep and 65 miles long! That's a lot of geologic activity in a short period of time.
We made a stop along the road descending into the Panamint Valley to check out some spectacular exposures of the dikes and sills that once fed the eruptions of the basaltic lavas (most years we are in too much of a hurry to get a camping spot at Stovepipe Wells). The magma was following whatever weakness in the surrounding rock that could be exploited by the molten rock. In some cases, vertical fractures allowed the magma to rise, forming dikes. In other cases, the molten rock flowed between limestone layers, forming sills. This extraordinary roadcut (below) showed textbook examples of both kinds of intrusions in the same outcrop. The usually black basalt has been oxidized (rusted) to produce the strange reddish-brown color. 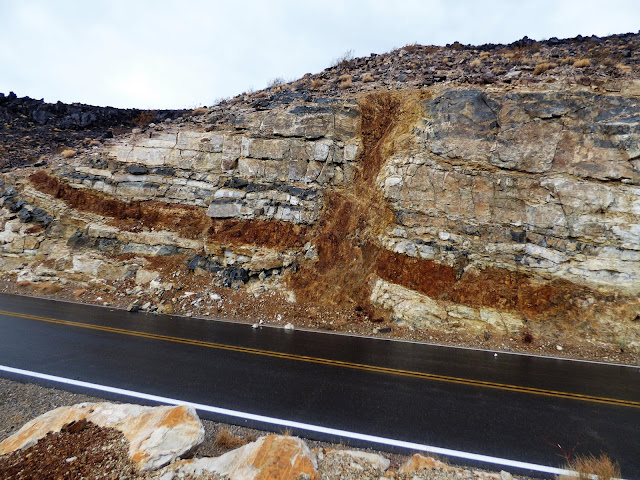 There's a saying that one should never blindly sit on the ground in the desert. There are just too many things with fangs, stingers, or spines. The barrel cacti were looking to grow quickly in these rare wet times! 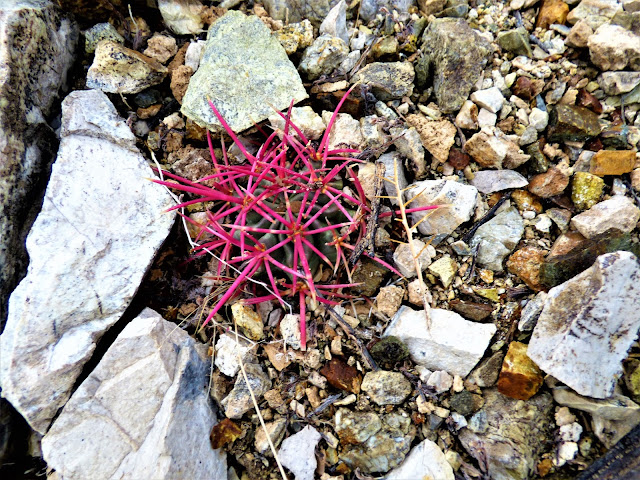 We headed down the highway. We had reached Death Valley National Park, and we faced whatever Bombogenesis was going to throw at us...
Posted by Garry Hayes at 4:24 PM

I love that roadcut exposure. Where is it?

If memory serves, it is just short of 2 miles down the hill from the Crowley Vista Point. There is a dirt pullout just big enough for our four vans to fit.