A Place Where Water Once Was But Was No Longer, But Once Again Was - Travels in Death Valley 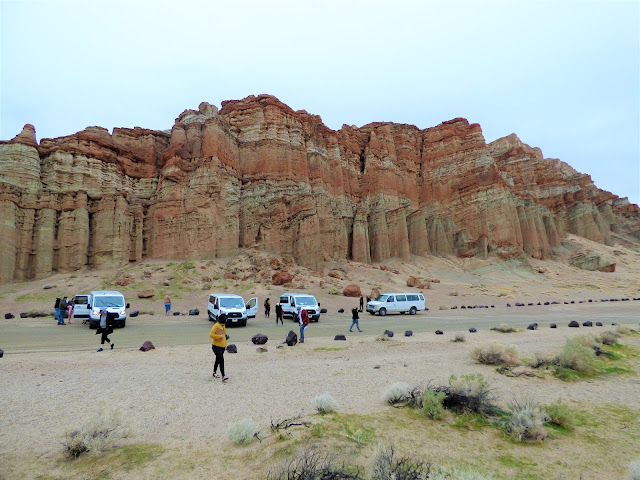 I'm finally not "liveblogging the deluge" anymore. I thought back at the beginning of January that I was monitoring a historic flood event that was going to be over with in just a few days. Somehow, new storms kept blowing through, and I was watching and monitoring flood activity around the state. Those "few days" turned into a six-week series of observations. But now that the storm activity has subsided a bit, the observations are going to be in the past tense. I didn't have much in the way of internet access over the holiday weekend, and we went and stared into the abyss of the storm with little to defend us but waterproof jackets and the nylon walls of our tents. We explored Death Valley National Park during one of its most intense storms of the year. 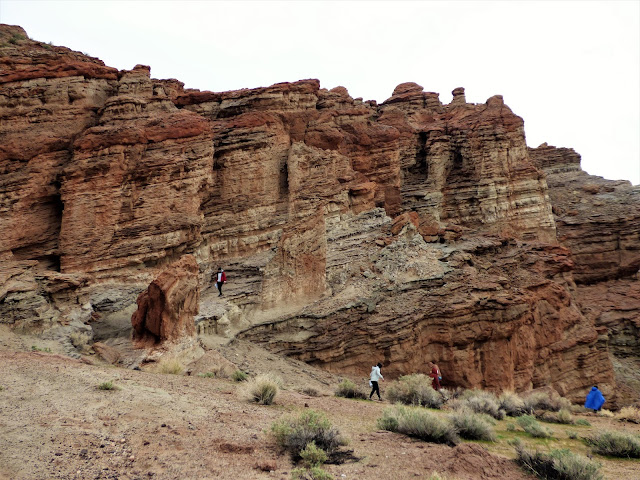 On the whole, we were pretty lucky. We got drenched by rainstorms on the first two nights of the trip, and rain played havoc with our travel plans during the first two days, but most of the principle roads in and around Death Valley remained open, and we were able to get to most of our objectives. The first day was certainly typical of this; we missed a planned fossil hunt because of the driving rain, but we managed stops at the other three localities, and even added two extra stops that weren't in the original plans. Our first stop was at Red Rock Canyon State Park near Mojave for a look at the colorful terrestrial deposits of the Ricardo (or Dove Springs) formation. If the exposures look familiar, you've probably seen them in a number of Hollywood movies. I've written extensively about the geology of Red Rock in the past; check out this post for some details of this fascinating place. 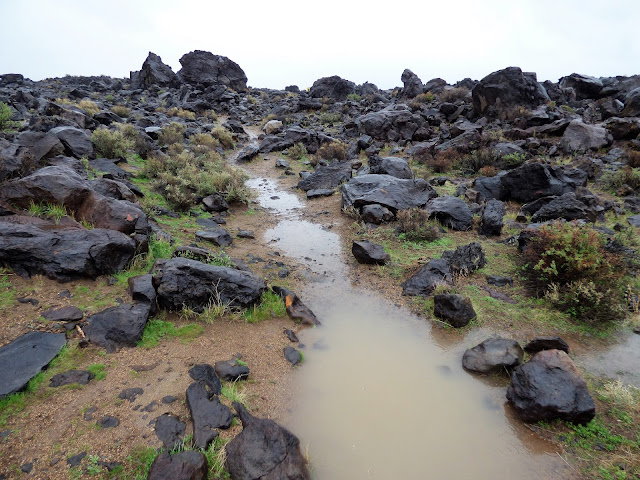 The real thrill of the day was to see water where water once was but was no longer, but once again was. Shall I explain?

During the Pleistocene Ice Ages between 2 million and 12,000 years ago, the climate of the northern hemisphere swung wildly from warm to cold and back to warm again, perhaps as many as twenty times. Ice accumulated across broad swaths of Canada and northern Europe, and several times crept across the border of the United States, ultimately covering around 30% of the lower 48 states. The thick ice cap never reached Oregon or California, but the Cascades and the Sierra Nevada developed an extensive network of alpine glaciers. Some streams of ice, for instance in the Tuolumne River basin, reached a length of 40 miles. 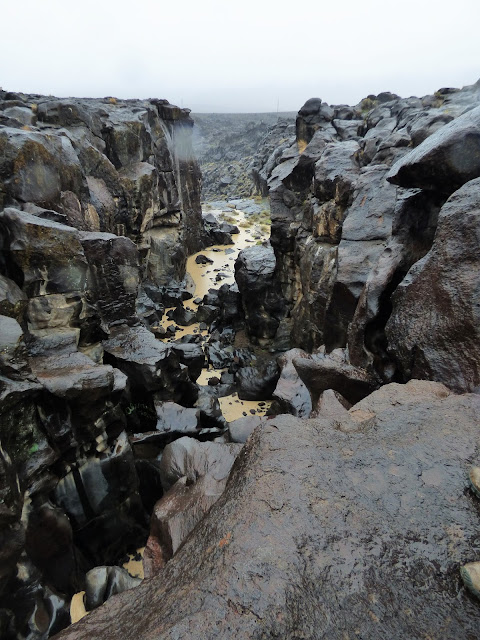 The glaciers of the Sierra Nevada never reached far into the desert basins to the east, but the influence of the cooler and wetter conditions was unmistakable. Meltwater filled the enclosed basins which then spilled over into adjacent basins, forming a series of what are now called pluvial lakes. Mono Lake is a small remnant of the glacial Lake Russell, and Owens Lake still contained water as recently as the 1920s (before Los Angeles diverted the incoming streams). Other lakes included China Lake, Searles Lake, Panamint, and ultimately Lake Manly in Death Valley. Vigorous fast-flowing rivers connected the widely separated lakes. Our second stop concerned one of those rivers, the one that flowed from Owens Lake to China Lake through the Indian Wells Valley.

From several hundred thousand years to as recently as 10,000 years ago, basaltic lava flowed from cinder cones and fissures of the Coso Volcanic Field. Some of these flows blocked the river, and formed a forty-foot high waterfall. The river scoured a channel, and the waterfall eroded in an upstream direction. Boulders trapped in river eddies swirled around, forming amazingly deep potholes. And then the ice receded. The level of Owens Lake dropped below the rim, and the river through what we call Fossil Falls ended. 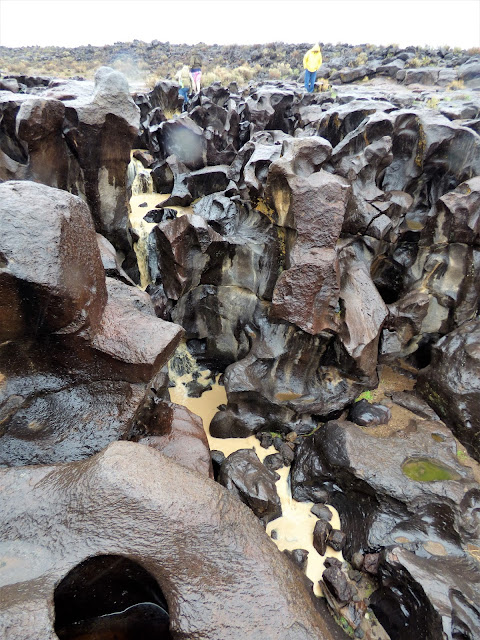 The river ended thousands of years ago, but on rare occasions there is an echo of the days when a wild river flowed through the gorge. I've seen it only twice, but when the rains have been plentiful in the Owens Valley, a small stream of water flows through Fossil Falls. That's what we got to witness last week, thanks to the Bombogenesis storm (or Lucifer, or whatever they called it). A river the color of a creamy latte made its way through dark basalts. 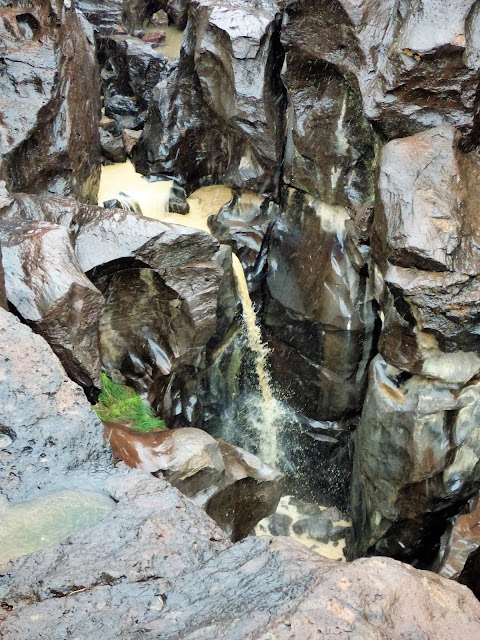 It was a fine introduction to our exploration of the geology of the Death Valley region, and it wasn't the first time we were going to see water in places where water was not normally found. Death Valley is a place where the water once was, but was no longer, but once again was...

Do you think that there will still be water at the falls next month? I've got a trip that goes from Vegas to Lake Isabella/Bakersfield through Death Valley and would love to check this out. Just don't want to take my passengers to something different from what I'd describe.

Unless there are some new storms, I doubt there would be water, but Fossil Falls is always an interesting place to visit. It's also easier to climb into the canyon when the rocks aren't slick with rain. I will guess, however, that the potholes will still have water, and therefore fairy shrimp. They are also a fascinating sight.

Thanks for live-blogging the deluge of >10,000 years ago. Your post about fossil falls years ago inspired me to stop there last summer and I wasn't disappointed. I went up to white mtns later that day and was able to appreciate the amazing tilted sedimentary rocks in the Westgard pass. Thanks for inspiring my curiosity with your blog and photos.

Thank you for the kind thoughts!