Liveblogging the Deluge: A Tuolumne River Update, and Scenes on the San Joaquin 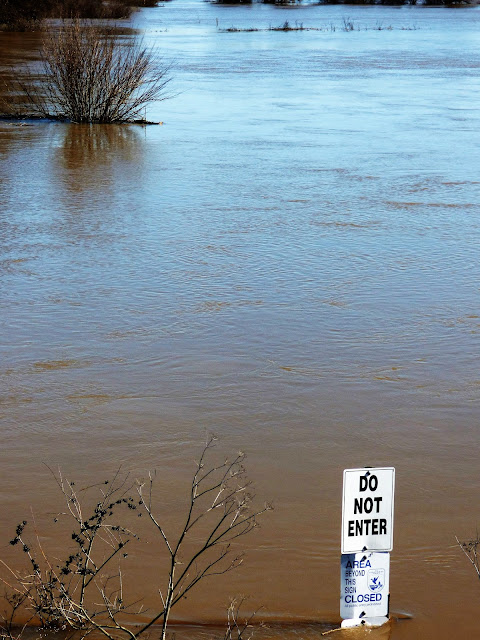 The travails at Oroville Dam are appropriately dominating the news this week as nearly two hundred thousand people remain isolated from their homes as the operators work to temporarily shore up the failing spillways at the lake. It should not be forgotten that most rivers in Northern California are running very high, and with yet another storm arriving this week, the threat of flooding elsewhere is still very real.
I don't have much information on the San Joaquin River, but I crossed the river yesterday near Stevinson on Highway 165, and it was well out of its banks. There are reports of flooding downstream west of Modesto. Although the river was clearly flooding, it was still well below the levees near the bridge I crossed.

I made it down to the Tuolumne River Parkway Trail this afternoon, and found that the river has reached the highest flows since the recent storm assault began in January. It is swollen with water released from Don Pedro Dam upstream. 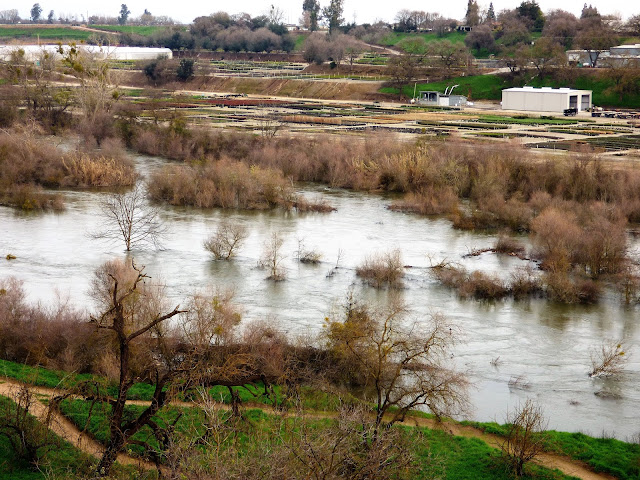 The capacity of Don Pedro is 2.03 million acre-feet (water elevation 830 feet), and the latest measurements show the lake at just inches below 828 feet. Inflow has declined in the last day or so to 12,544 cubic feet per second, while outflow has been ramped up a bit past flood level, to 10,700 cubic feet per second, so the lake is still rising, albeit much more slowly than a few days ago. An announcement from Turlock Irrigation District indicates that they have no current plans to open the emergency floodgate.  If they do, it will be for only the second time ever. The first time was in 1997, and that event carved a new channel through a pasture area that reached a depth of 40 feet. 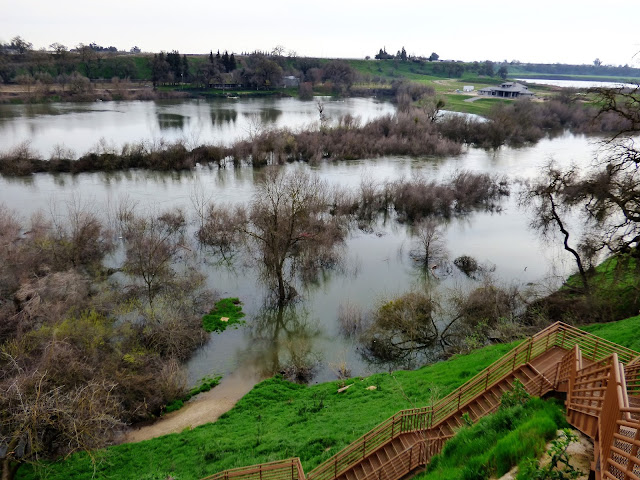 It's important in these days of evacuations in the Oroville Dam area to point out that there are big differences between the spillgates at the two dams. The floodgate at Don Pedro is more heavily reinforced and the former meadow slopes more gently, so undercutting of the gate is unlikely. The overflow channel, although not lined with concrete, passes no major infrastructure other than Bonds Flat Road, which washed out in 1997 (but was later repaired). If the storms fill the reservoir, the floodgates could indeed be opened, and some flooding would occur downstream, but not to the extent of the potential flood that threatens Oroville and other towns in the north valley.

In the meantime, I am watching a powerful river changing things along my exercise trail. Portions of the trail were underwater, and the normally placid river is surging noisily downstream. High flows are expected to last for many weeks as the reservoir is prepared to accept the snowmelt that will begin soon. It has been a long time since things have been anything like this. 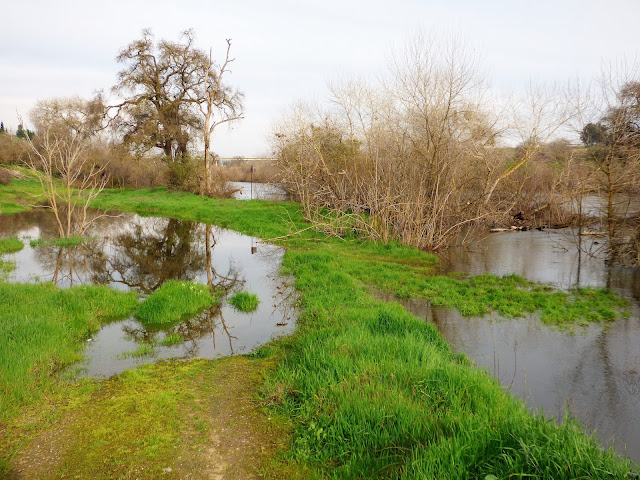 I'll repeat what I said in the last post. Flooding is a serious matter, one of the most dangerous of geological hazards. One thing that sets river floods apart is their predictability, in that rivers are closely monitored, and flood levels are almost always known with good accuracy hours and days ahead. This means that if you are told to evacuate, your life is in danger, and you should follow any directions and requests made by the authorities. Unlike the give and take of politics, there is no place for "unbelief" that the river will hurt you or your property. The river doesn't care what you believe. Just get out of the way. 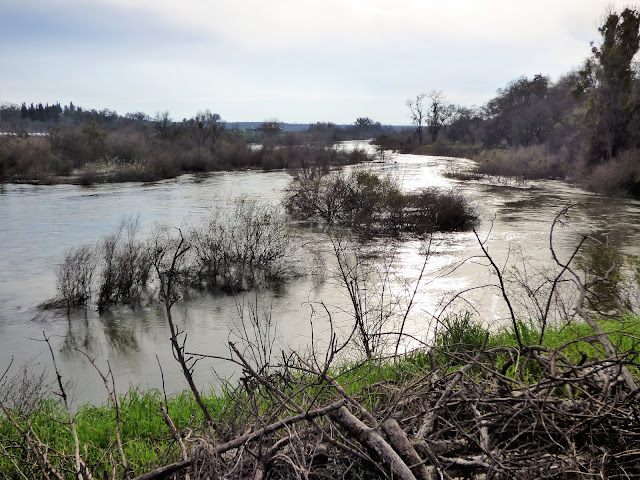 I just found your blog and I am pretty excited. I am an artist living in Calaveras County and a frequent and avid hiker. Geology is a new subject for me. (It ties in to my work in a loose way.) Your posts give me a good place to start.

I am interested in that trail that you wrote about. When the waters recede a bit I'll go and take a look. I had the impression though that it connects to a larger trail system?

And more to the point of the post, my husband has co-workers that live in Oroville. They scoffed at the evacuation orders a bit, saying that things were very disorganized and that they felt the situation wasn't as serious as reported on TV. It looked serious to me.

Thank you for your writing. I find it informative and fun.
Libby Fife

In case you're interested in another perspective, Dave's Landslide Blog is worth a read: http://blogs.agu.org/landslideblog/2017/02/14/oroville-dam-site/

I live next to this river trail. It is a beautiful area. I'm praying that our homes will not be in danger of flooding. The flows are increasing and we are safe at this point, but I didn't realize that part of the river trail was under water. I believe the trail is 1.5 miles long and the round trip is 3 miles... unless it it 3 Mike's long in one direction. The little signs confuse me. But it is an excellent place to nature walk or for exercising.

The trail should be okay for the most part unless the flood waters rise a lot more (and who knows what is possible?). The parts that were underwater were at the downstream side of the stairs where the fishing access trail goes. The other was the "short cut" trail on the lower side of the water treatment plant, but that's not an official part of the trail system.