Liveblogging the Deluge: Meanwhile, Back at the Local Dam...Don Pedro Reservoir Today 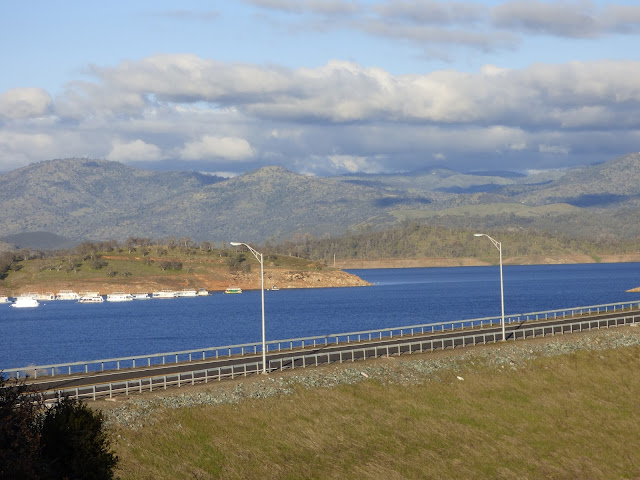 With all the attention being directed at Oroville Dam today with the broken spillway, it's a bit too easy to forget that similar conditions are being experienced all across Northern California. Several reservoirs are approaching full capacity, including Lake Shasta (96%), and Don Pedro Reservoir (97%). Since it is a few miles upstream of my village, Don Pedro has been the center of my attention since the present series of atmospheric river storms arrived in Northern California.
The capacity of Don Pedro is 2.03 million acre-feet (water elevation 830 feet), and the latest measurements I've seen show that the lake rose 6 feet in the last day to just over 825 feet. Inflow continues in the range of 30,000 cubic feet per second, while outflow continues at just below flood level, about 9,200 cubic feet per second. It may very will be that the inflow will decline (in the past day it dropped from 32,000 cfs to 28,000 cfs) just enough that the reservoir will stop rising, but it will be a close thing. I've heard no word about plans for opening the emergency floodgates, but if they do, it will be for only the second time ever. The last time was in 1997. That event carved a new channel through a pasture area that reached a depth of 40 feet. Since that channel is already present, I don't expect there will be too many problems associated with the overflow, but uncontrolled runoff could result in some minor flooding downstream in Modesto. I would appreciate hearing from anyone in the know who can shed light on the plans for the next few days. 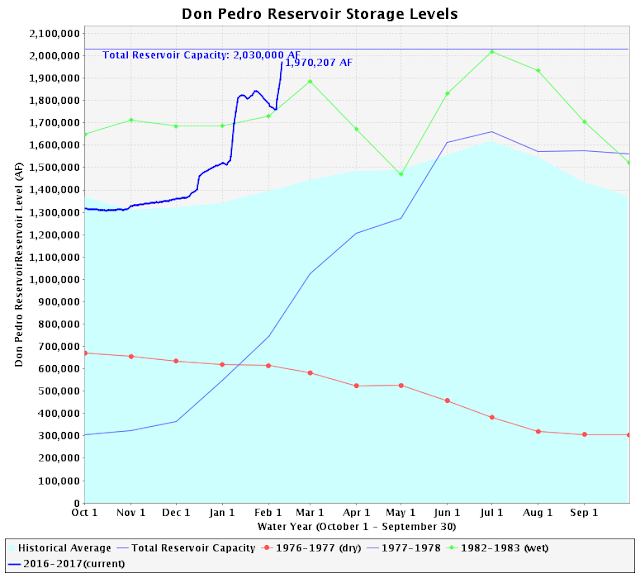 In any case, the reservoir is higher than it has been in many years, and room must be made for the coming runoff from the near record snowpack. That means that the Tuolumne is going to be flowing at thousands of cubic feet per second for the next few months. That is an unprecedented situation that may very well change the configuration of the river in some areas.

It's a good thing that we now have a window of good weather, maybe five days before the next storm arrives. We need some time to make more space in the reservoirs.

Garry, thanks for your continuing comments on this unusually wet year. With dams releasing water continually, what is the effect on groundwater recharge? I'm from concrete covered Socal but it seems all the runoff in the Great Valley will disperse broadly and sink in as groundwater. No?

It certainly helps but mostly in the immediate vicinity of the rivers themselves. Farmers like to claim that flood irrigation rebuilds the water table, but I am somewhat skeptical that they would pay extra for water that would just go to "waste" underground. There needs to be an effort to pump excess water directly into the aquifers, kind of reversing the pumps. Southern California does have its share of concrete channels, but in places they do well with recharge basins that slow down floodwaters and allow them to sink underground. I mostly remember the ones below San Antonio Creek and the San Gabriel River. Also around La Canada.

I see the recharge basins adjacent to the santa ana river and am thankful for them. I can't believe the land hasn't been sold for development.