Liveblogging the Deluge: San Joaquin River National Wildlife Refuge - What a difference a few months made (and Rabbits)

Just a few months ago, the San Joaquin River, and its major tributary the Tuolumne River, were in big trouble. The worst drought in California's recorded history had left the rivers at a mere trickle, and many parts of the San Joaquin were dry, despite recent efforts to bring back some sort of minimal flows to stretches of river that had been dry for decades (after dam and irrigation levee construction upstream). The invasive weed River Hyacinth had choked channels, crowding out native vegetation and making life difficult for fish and other organisms.

I hiked the Pelican Nature Trail in the San Joaquin River National Wildlife Refuge back in November, and despite a few early storms, dryness was the overwhelming feeling. Volunteers have put in a vast amount of work replanting former riparian woodlands, but it felt like the river overflow areas wouldn't see water any time soon. The river was flowing at a sluggish couple of hundred cubic feet per second.
I returned to the Pelican Trail yesterday to a changed world. A series of atmospheric river storms over the last six weeks have dumped record amounts of precipitation across northern and central California. Watermasters at the reservoirs upstream joyfully let their dams fill with the prodigious amounts of water, but then the storms kept coming and they realized that some of the dams were in danger of overflowing. They ramped up flows out of the reservoirs and the rivers downstream swelled. The Tuolumne River, for instance, has been flowing at near flood levels (~9,000 cubic feet per second) for the last five weeks, and this week the flows were increased to over 11,000 cubic feet per second. Don Pedro Dam is only 2-3 feet below full capacity, and has only about 30,000 acre-feet of capacity (out of 2.03 million acre feet of storage space). The Merced River has been experiencing high flows as well, and water is high in the usually dry San Joaquin riverbed. Yesterday the river at Vernalis, just downstream of my trail, reached official flood state at 34,000 cubic feet per second. 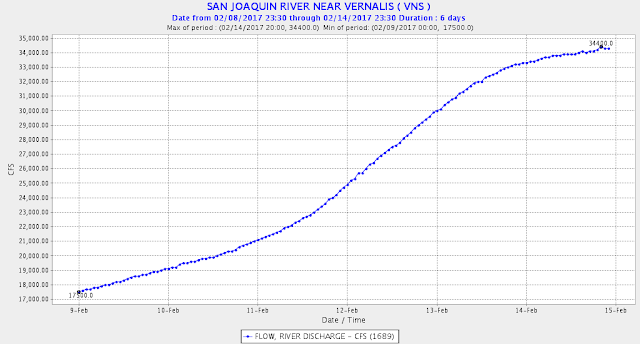 It was rather stunning to stand on one bank of the San Joaquin, the neglected trickle of water from the southern Great Valley, and not be able to discern exactly where, off in the distance, the other bank was located. And there is this: the water level is probably going to rise soon. Yet another intense storm is headed towards California, and there is going to be another week of rainfall and snow in the mountains upstream. Don Pedro Lake, for one, is just about full and it is possible they will have to let additional water through the system to keep the lake from overflowing. 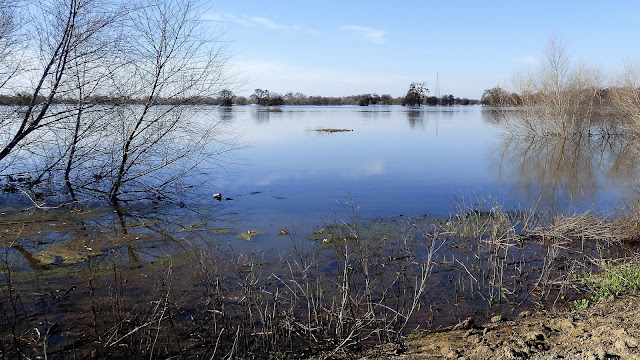 More than a month ago, on January 4, I wrote the first of a series of blogs that I soon called Liveblogging the Deluge. I quite honestly thought it was going to consist of four, maybe five posts as the first atmospheric river storm passed through California. But another storm soon followed, and then another. I look back now and see that I've published 24 posts on the storms, and they keep coming. This has been an extraordinary storm event and, for some people, a scary experience. Nature cares little for human beings and our puny attempts to control it can sometimes result in failure and tragedy. Despite the evacuation of 180,000 people because of an unstable situation at Oroville Dam, we've kind of held things together in the north part of the state, but the system is presently strained to the limits. Levees are showing signs of failure in places and reservoirs are getting dangerously full. It is imperative that residents in California keep their eyes open, and when the warnings come and evacuations are ordered that they comply as quickly and orderly as possible. Making a principled stand to defend your house against a rising flood is dangerous and may be deadly. 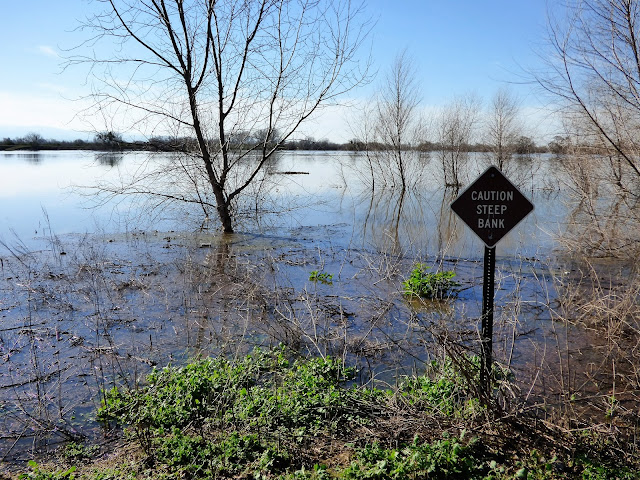 By the way, the other strange sight on the Pelican Nature Trail was the prevalence of Desert Cottontail Rabbits. There were perhaps hundreds of them along the trail. I assumed they had been flooded out of their habitat on the flats below and had gathered on the high ground of the levee where they were nibbling at the smallest shoots of grass, or reaching for leaves on the lower branches of the shrubs. 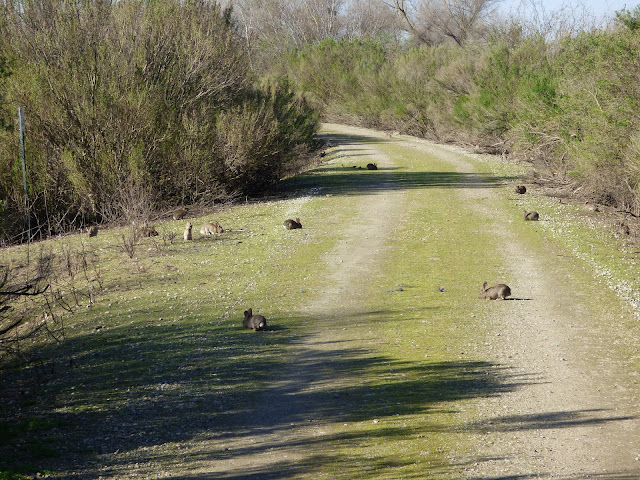 They barely seemed to register my presence. I was stepping only two or three feet away from them before they would move into the brush along the trail. They only scattered rapidly once, when a Northern Harrier flew overhead. Human beings are not the only beings who are affected by the floods. 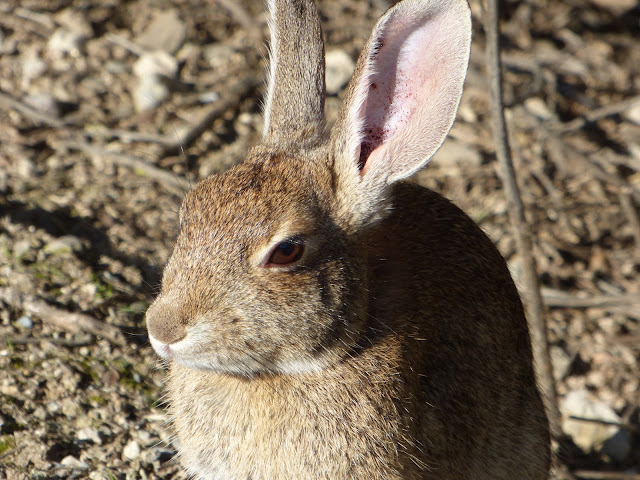 I'm not going to be able to liveblog the coming storm, as I will be out in the middle of it. We're headed out to the Death Valley region where we will be navigating between storms and flash floods. I expect to have some interesting observations once the storm is past and we are home again. And yes, we will be careful out there. It's not often that one gets to observe rain in the driest place in North America. See you in a few days!
Posted by Garry Hayes at 7:03 PM

We sat out a big deluge up at Dante's View this past Sat morning. The clouds and ground fog below made for beautiful, mysterious views of the valley floor.

Here's to hoping that the flowers return to Death Valley this spring. I missed the last super bloom.

I've been in Death Valley for two "storms." The first I'd never call a full storm but a steady drizzle. It was still 105 degrees and the sun was shining but it was a good 20 minutes of rain. It was so confusing that I bought myself a burrito and grabbed a seat outside of the Furnace Creek Resort because I can't imagine having another chance to sit in the rain in Death Valley eating a burrito.

The next time I was camping in Stovepipe Wells and hadn't bothered to put the rainfly on my tent. Feeling a couple of drops on my head I woke up in just enough time to have the wind blow under my sleeping pad and actually move me. Spent the night sleeping in swaying van and woke up to my neighbors campsites having been washed down that night's "river."