So You Were in Death Valley During Bombogenesis...Did You Get Any Rain? 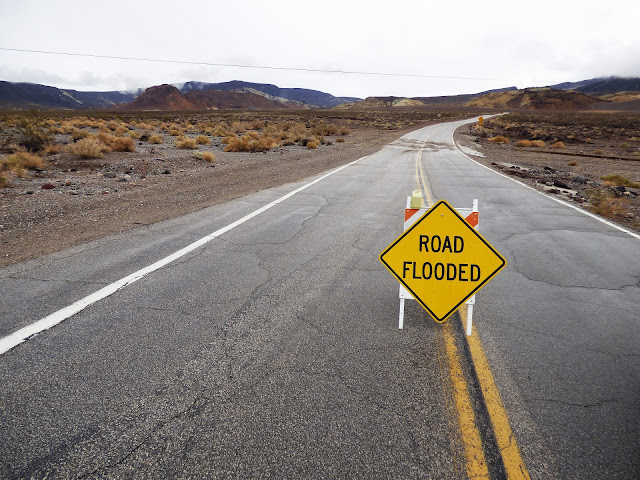 Explosive cyclogenesis (also referred to as a weather bomb, meteorological bomb, explosive development, or bombogenesis) refers in a strict sense to a rapidly deepening extratropical cyclonic low-pressure area. One of those things hit Southern California a few weeks back, at the very moment that we were exploring Death Valley National Park. It caused some serious flooding problems across the Southland, and we knew we were in the path of it. 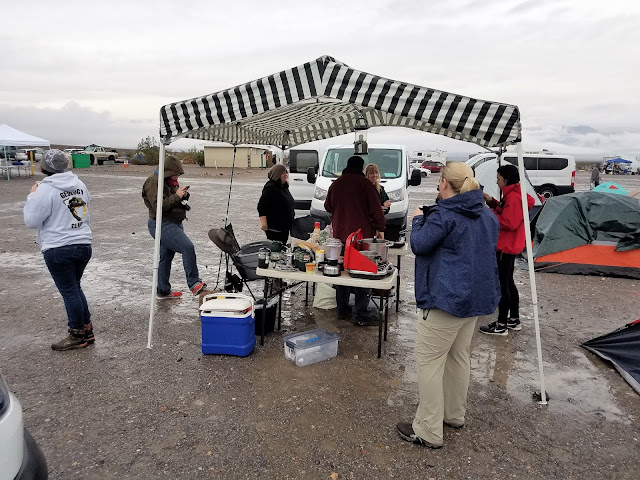 It's kind of ironic that during the latter stages of California's staggering five-year drought that Death Valley had more precipitation than normal, and last spring that rain delivered a so-called Super-bloom, one of the greatest wildflower shows in decades (see some of our pictures from last year right here). Then, this year when most all of California was being pounded with storm after storm, leading to record accumulations of snow in the mountains, Death Valley stayed dry. Less than a quarter inch of rain had fallen in the five months before our arrival. 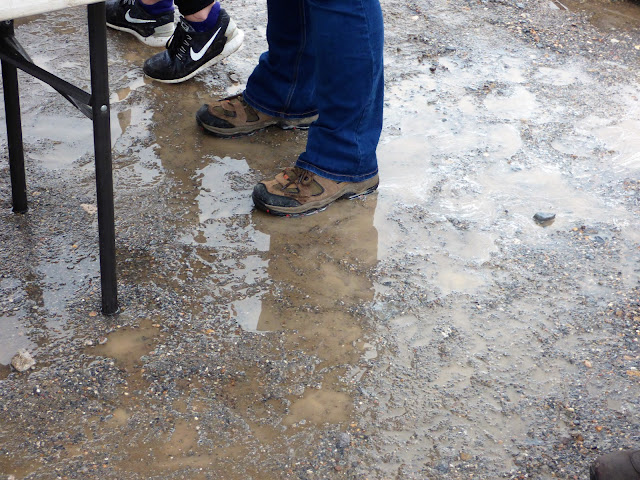 It didn't stay that way, of course. We got doused the night before in Bakersfield, and the rain stayed with us for most of the day. We got a lucky break of several hours as we set up camp at Stovepipe Wells in Death Valley, but the rain began falling again during the night, and it was constant for quite a few hours. Somewhere around 0.5 inches fell on us. That may not seem like very much to those who live in wetter climes, but it is overwhelming for a desert environment like Death Valley, which is lucky to receive 2 inches in an entire season. The desert soils look rocky, but the pebbles often hide a layer of clay and calcite deposits that are largely impermeable to water. Instead of sinking into the gravels, the water runs off, and our campsite turned into a muddy morass. 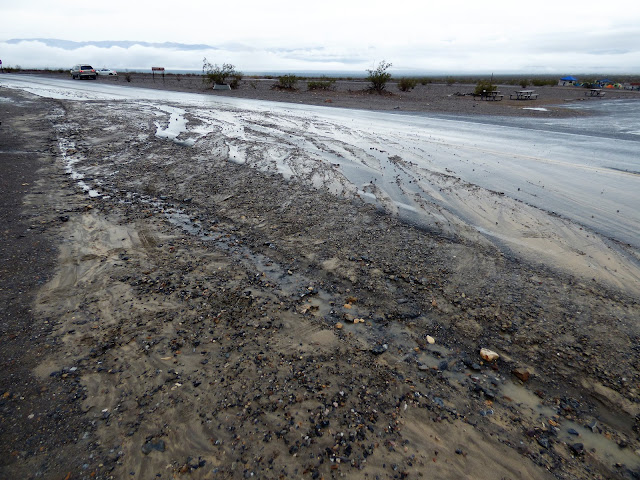 It wasn't just the campsite. We again had a lucky break as far as morning rain was concerned. There was a hiatus that allowed us to pack up and hit the road in an attempt to see what we could of the park. No roads were closed overnight, but raging torrents had clearly passed through during the hours of darkness. 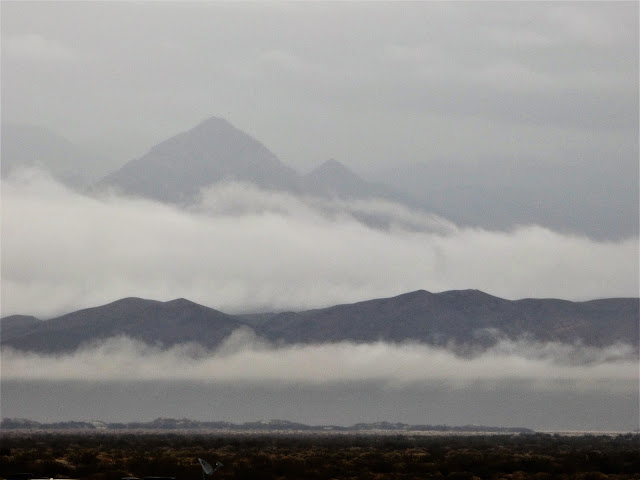 It has been rare during my 28 years of bringing students to Death Valley that we've seen the mountains draped in rain clouds, so the scenery was quite stunning. Above one can see the view of Grapevine Mountains from our campsite. 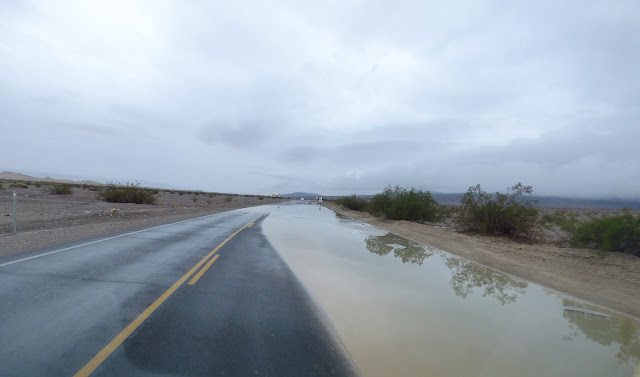 Driving the highways demanded constant attention, as puddles covered the roads in several places. The Furnace Creek resort had experienced quite a bit of runoff. They've had quite a year, with a fire several months ago that destroyed the laundry room and several other buildings (below). 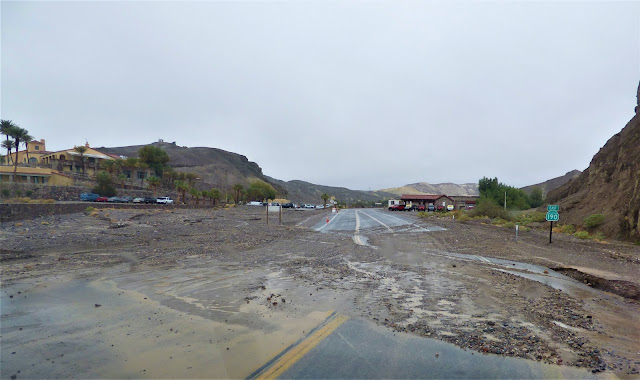 We made our way past the resort and headed east towards Ash Meadows National Wildlife Refuge, hoping to miss the brunt of the precipitation that was still falling that morning. Debris was everywhere, but never so bad as to prevent our passage. Many of the roads are carefully designed to let the debris flow over the highway without causing damage. Sometimes it works, but there are limits. The highway at Scotties Castle was completely destroyed by an unprecedented flash flood a few years ago, and has yet to be rebuilt. 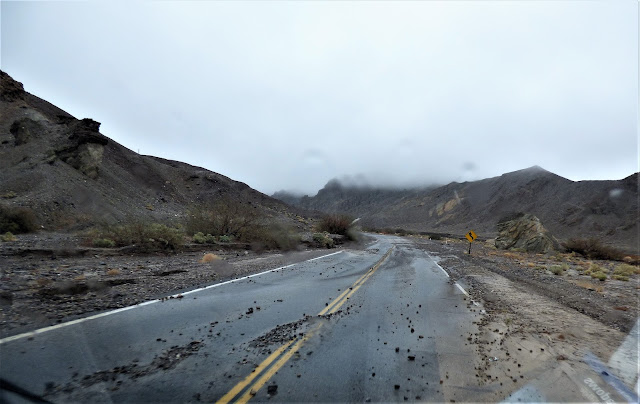 The rain did add a special perspective though. The rocks of Death Valley are always colorful, but wetness seems to bring out an intensity of color that is rarely seen most years. A bit of inconvenience and discomfort was balanced by some very pretty scenery as we drove along. 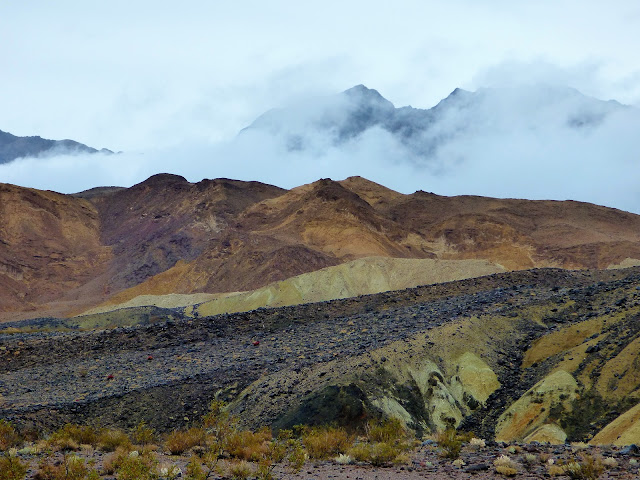