Liveblogging the Deluge: It Ain't Over 'til the Fat River Drains...A Six Month Flood is in Process 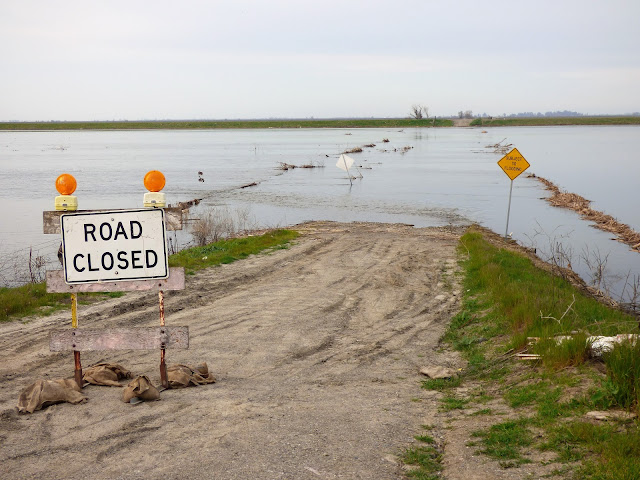 The flooding in California hasn't been in the news all that much of late, but that doesn't mean the threat is over. The atmospheric river storms that have been hitting the state like an out-of-control fire hose have been turned off for more than two weeks, and no storms are in the ten-day forecasts, at least not in my area along the drainage of the Tuolumne River.

Our local rivers haven't received the message yet.

We were at the Merced National Wildlife Refuge yesterday, and as we were leaving we noticed that the Mariposa Slough, a usually dry watercourse, was in full flood mode, flowing over Dan MacNamera Road. Off to the west, water covered a huge area (below). 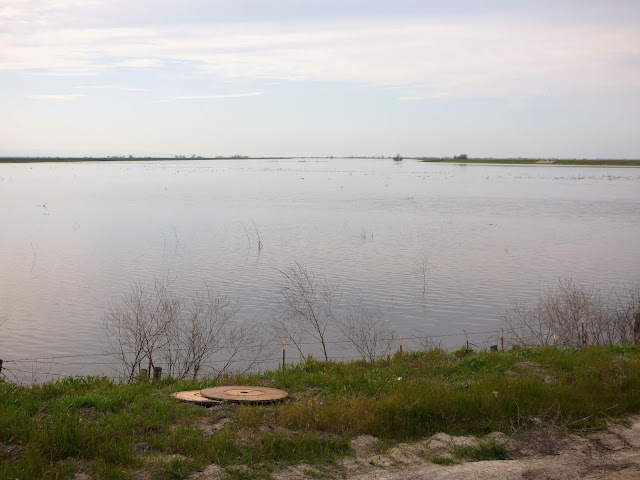 Today I was back on my own river, the Tuolumne, where it flows out of the Sierra Nevada onto the Great Valley floor. It is still flooding, and has been since January 4 when the most damaging of the atmospheric river storms began battering the state (the current flow is more than 11,000 cubic feet per second). One might think that once the rain stops, so will the flooding, but the situation is not so simple.

In the days before gigantic dams were built on Sierra rivers, huge tropical rainstorms would drop prodigious amounts of rain in the mountains, and monstrous floods would spread out across the floor of the Great Valley, looking much like the scene above, but extending for three hundred miles north, as far as Red Bluff in the north valley. The water would take weeks to flow out through the Carquinez Straits into San Francisco Bay. The last storm that did this took place in 1861-62. The vast flood caused the state to move its capitol to San Franscisco until the waters subsided. Besides 1862, evidence has been uncovered of similar intense events in 212, 440, 603, 1029, 1418, and 1605 (sediments from storm runoff are preserved in ocean basins offshore of the state). That adds up to around a 0.3% possibility in a given year; not common, but enough that emergency providers have to seriously consider the possible effects. 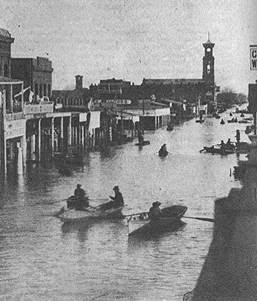 The giant reservoirs that have been built along the major rivers of the Sierra Nevada represent our last line of defense against such floods. They are designed to capture the biggest surges in such storms, holding the water until it can be released at lower flow rates spread out over time. Most years the dams do their job well, but they can be overwhelmed, as they were in 1997 when there was widespread flooding across the valley. Which brings us to the current situation on the Tuolumne River.

Don Pedro reservoir can hold just over 2 million acre-feet of water. Because of the brutal drought of the last five years, the lake was allowed to collect and hold much of the runoff from the early season storms of November and December, and by the end of the year, the lake was beginning to fill. And then the big storms of January appeared in the long-range forecasts. Operators at the dam realized they needed to make more room in the reservoir, so they ramped up the outflow of the river to a near flood level rate of 9,000 cubic feet per second. It's not usually allowed to go higher because of a local quirk of the geology.

The Tuolumne River is trapped in a narrow channel all the way through Modesto downstream, and has little room to spread out over the valley floor. In some ways that is a good thing: downtown Modesto and other cities downstream can't be flooded by overflowing rivers the way it can happen in Stockton or Sacramento (these towns require extensive levees for flood protection). Others who live downstream are not so lucky, as higher flows translate to deep-water flooding within the narrow floodplain. The floods can also overwhelm levees downstream on the flatter parts of the valley floor around Patterson and Tracy.

The unique channel and bluffs along the Tuolumne originated in the Pleistocene ice ages. During the time of maximum ice advance the swollen river (average flow was several times what it is today) was full of silt and mud which was distributed across the Great Valley flow in a vast alluvial fan. When the glaciers receded, the rivers started flowing clear and the faster flows cut into the surface of the alluvial fan, forming the distinctive terraces that can be followed from the Mother Lode to west of Modesto. 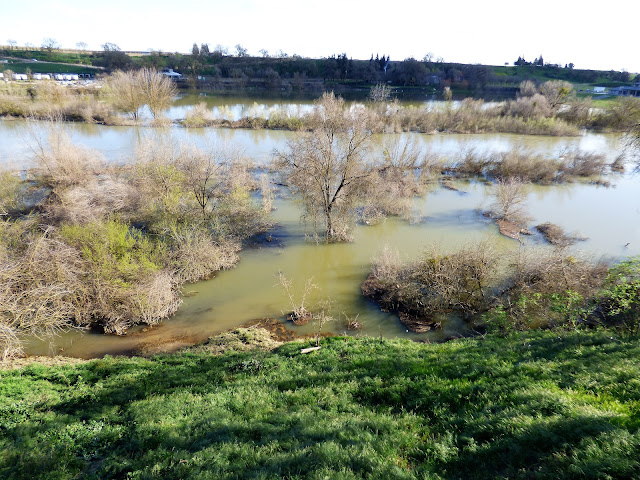 So here's the tricky part: this wasn't just a few tropical atmospheric river storms that dumped incredible amounts of rain. Many of these storms drew in arctic air masses and tremendous amounts of snow now coat the high country of the Sierra Nevada. The snowfall has accumulated to record depths and now something like two million acre-feet of water now drapes the slopes upstream of Don Pedro. If you are keeping track of all the numbers, that's enough to completely fill the reservoir, which happens to be nearly full already.

We are facing a problem of water disposal not seen in modern times. The operators of the dam have to walk a fine line of preventing downstream flooding, but allowing for huge inflows of melting ice and snow in the coming weeks. The "fine line" included opening up the emergency spillway for the first time since 1997 and having the water rise to within an inch or two of overflowing in an uncontrolled manner. Outflow finally began exceeding inflow on the 25th of February, and the lake is now about 10 feet below the rim for the first time since January.

The threat is not so much more stormy weather (the rain season is tapering off now), but heat waves. It's going to reach 80 degrees around the valley floor next week, and the warm conditions are going to accelerate the rate of melting. So we can be sure that the water managers will be watching conditions carefully. I read that flows will continue at near flood levels for another three or four months! 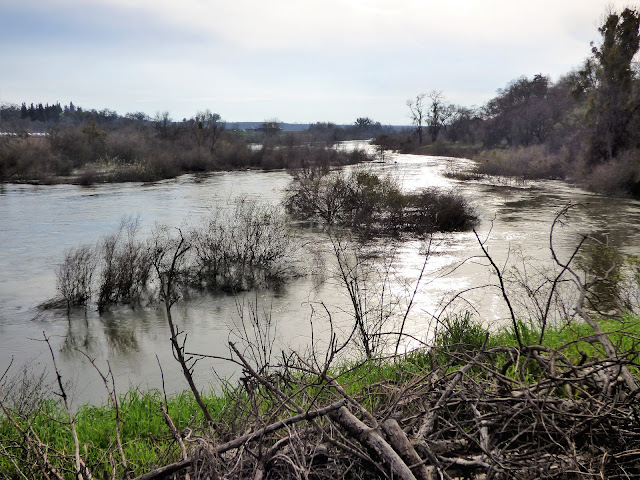 My local stretch of the Tuolumne River (and the rest, of course) will be a changed place by the end of this extraordinary year. I will not be surprised if there are some new channels in a few places. Certainly the number of trees along the river will be changed. Several big ones on the Parkway Trail have already come down. A great many shrubs and thickets have been washed away as well. One very nice development is that the upstream sections of the river have been swept clean of the hated river hyacinth, an invasive species that has caused innumerable problems (I don't know the current situation with the hyacinth in the Sacramento Delta).