Travels in Death Valley: the Strange Story Told By a "Rock"... 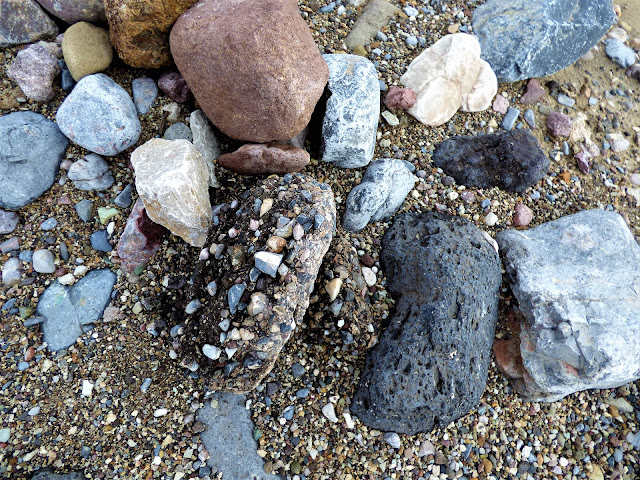 A beautiful collection of colorful rocks lie scattered across the surface of an alluvial fan in Death Valley National Park a few miles south of Furnace Creek. There is a piece of vesicular (full of holes) basalt on the lower right, next to a piece of gray limestone. One might be just 10 million years old, while the other may be 300 million, containing the remains of long dead and extinct organisms. At the top left, a piece of orange-brown sandstone, possibly deposited on an ancient ocean shoreline, or maybe a lakeshore in a long-ago desert, maybe even a sand dune. Perhaps a piece of granite is in there somewhere, a rock that cooled four or five miles deep in the crust. What a long journey it had before it was exposed by erosion and carried down the desert wash! And then there is...wait...what is that at center left? That's no conglomerate! Well it sort of is, but isn't natural is it? That's a piece of pavement. What's going on here? 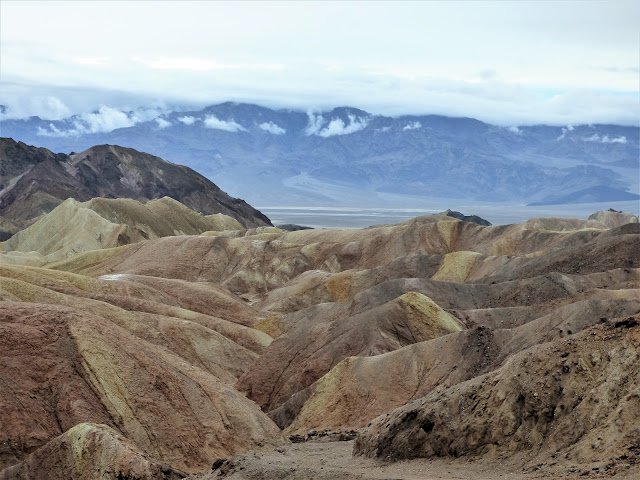 It's not a story that appears on National Park Service interpretive signs, and in fact I think the park service would rather that people not explore the particular canyon at all. It's sort of unstable, as in vertical walls made of loose and cracked chunks of claystone. And like the piece of asphalt pavement on the alluvial fan surface, it's not natural either. This canyon didn't exist 75 years ago. 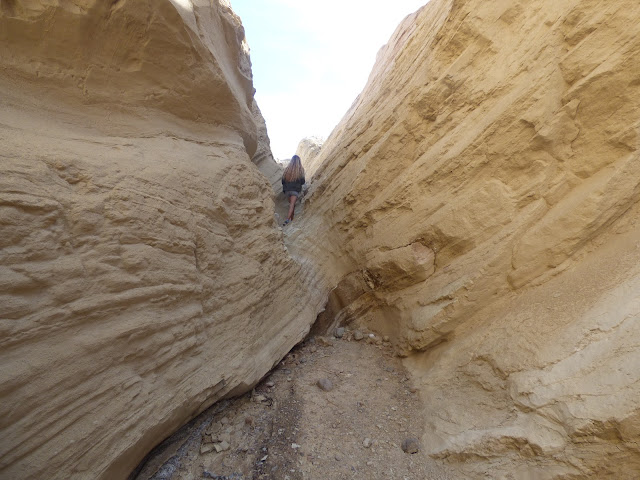 Gower Gulch used to be a minor drainage in the Furnace Creek Formation badlands near Zabriskie Point which debouched onto the floor of Death Valley, forming a small alluvial fan. Badwater Road crossed the fan, which consisted of mostly fine-grained materials like silt and clay. 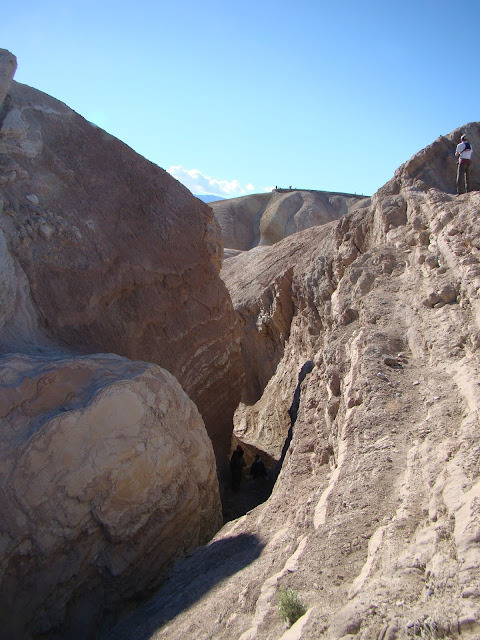 At the diversion point (above), the flash floods cut through the soft siltstone and shale like a hot knife through butter, cutting 40 feet or more in seven decades. The floods carry a heavy load of coarse-grained debris and gravel that acts as an abrasive on the channel floor. The canyon changes year to year as each flashflood causes slopes to be undercut, causing rockfalls and slope failures. 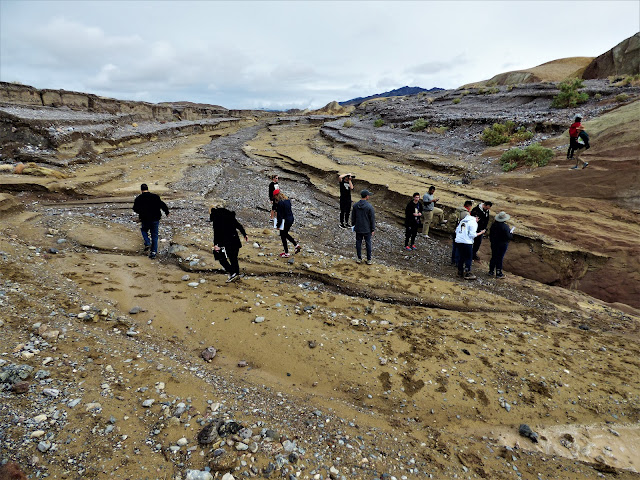 It's upstream where serious damage to the road occurs. The diversion caused a sudden steepening of the Furnace Creek channel, and the faster moving floods have eroded the channel in an upstream direction, a process called headward erosion. The deepening of the channel is apparent as far as two miles upstream, and in numerous places it has encroached onto Highway 190, washing away some of the pavement, and incorporating the fragments into the alluvial fan deposits downstream (as in the first picture above). 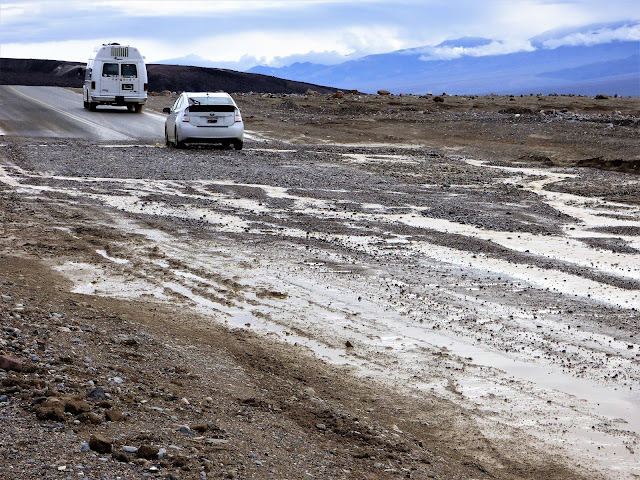 Downstream, the road damage occurs in a different way. The alluvial fan used to receive fine-grained silt and clay in relatively minor floods that did little damage to Badwater Road. Now the flashfloods are on steroids, so to speak, with more water, more debris, and far more speed. Badwater Road is regularly overwhelmed, as it was on the day we visited, with mudflow deposits. Boulders can sometimes be sizable. For example, check out the two fragments on the fan in the picture below. How big do you think they are? 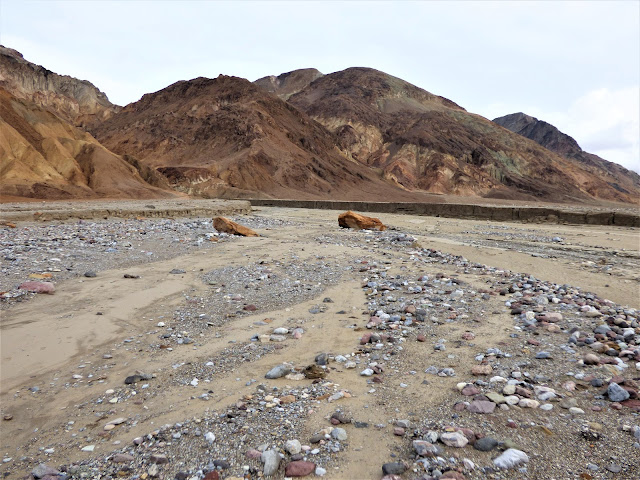 Death Valley is a monument to geologic changes over billions of years, but it is also a dynamic environment where geologic change happens on a daily and yearly basis as well. We saw plenty of evidence during our February trip. 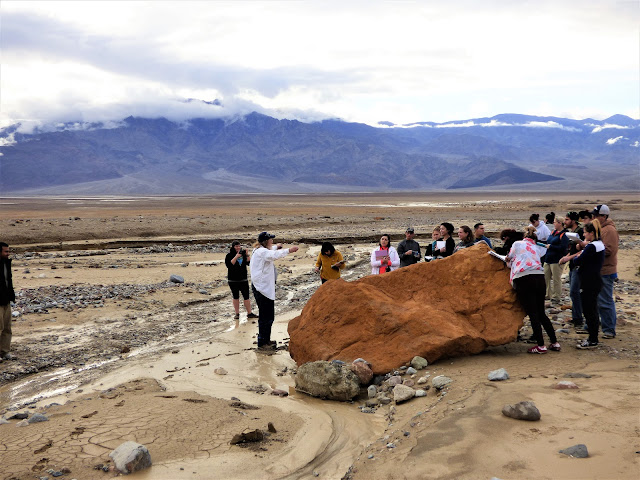