A Place Where Water Once Was But Was No Longer, But Once Again Was (sort of) - Travels in Death Valley 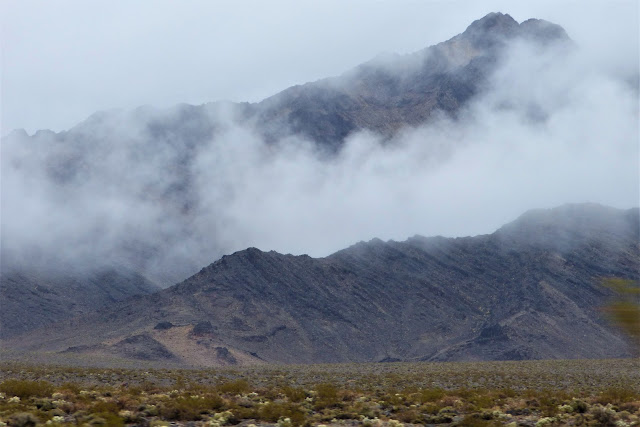 Yes, I used that silly title a few weeks ago, but today it is in a very different context. We were continuing our exploration of the Death Valley region, and we were still dealing with the effects of the Bombogenesis storm that dropped so much precipitation across Southern California. We weren't able to reach Devil's Hole to see the rare pupfish because we almost got stuck in the mud. So we headed back west towards Death Valley as the storm finally seemed to be breaking up.

Highway 190 traverses a long northwestern-trending valley or trough flanked on the north by the steep and rugged Funeral Mountains. The mountains were just barely visible through the rainclouds, but we could make out thick gray sedimentary layers tilted to a high angle. Taken all together, the layers are very thick, approaching 20,000 feet, around four miles. There is quite a story in those rocks. 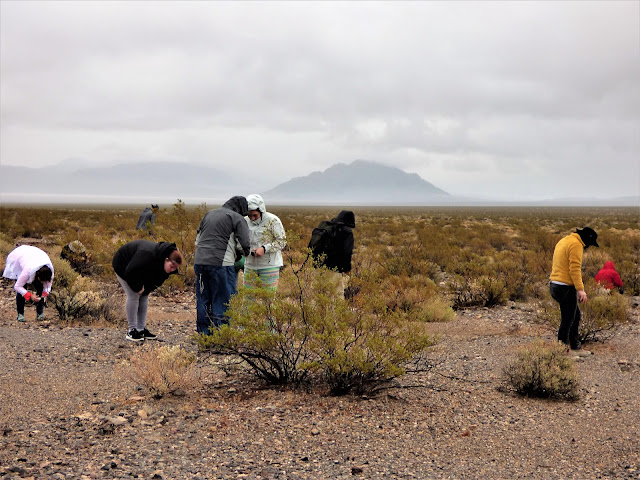 One of the challenges of taking new students into outdoor geological environments is getting them to recognize that the landscape that exists today is far different than those that came before. Nothing accomplishes that quite so well as releasing them onto the floor of an incredibly dry desert valley, and letting them discover that the rocks underfoot were chock-full of fossils that originated on the bottom of a shallow tropical sea. The rocks layers that make up the Funeral Mountains once lay offshore of the North American continent. California simply didn't exist 300-400 million years ago. There was only ocean. 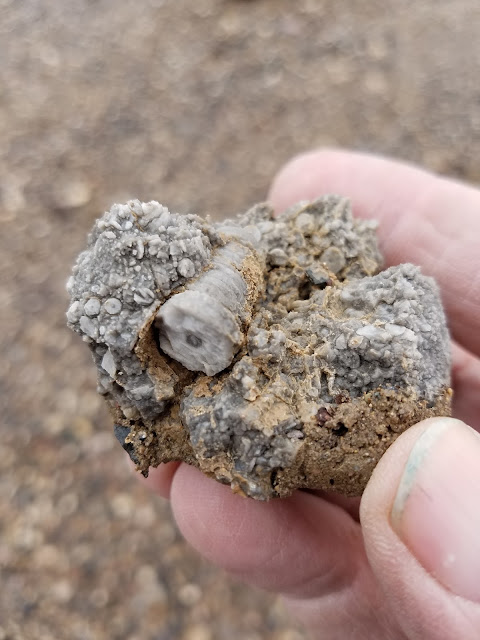 One could argue that this was an exceedingly boring time as far as geological activity was concerned. For 200 or 300 million years there was quiet deposition of layers of lime-rich mud and not much else. It maybe wasn't exciting at the time, but to a paleontologist this is intellectual treasure beyond compare. It's rare around the planet to find places where deposition took place for hundreds of millions of years without interruption, and equally rare for such places to preserve the myriads of life forms that lived in these shallow seas.

The Grand Canyon is a justly famous and spectacular monument to the forces of geology, but the Paleozoic layers there are only 4,000 feet thick, and entire periods (the Ordovician and Silurian) are missing. The fossil record is incomplete. Death Valley National Park on the other hand has layers dating from every period within the Paleozoic era, as well as Cenozoic layers that are entirely missing from the Grand Canyon. It has one of the greatest fossil records to be found anywhere in the national park system. That what we were out to find that afternoon: fossils! 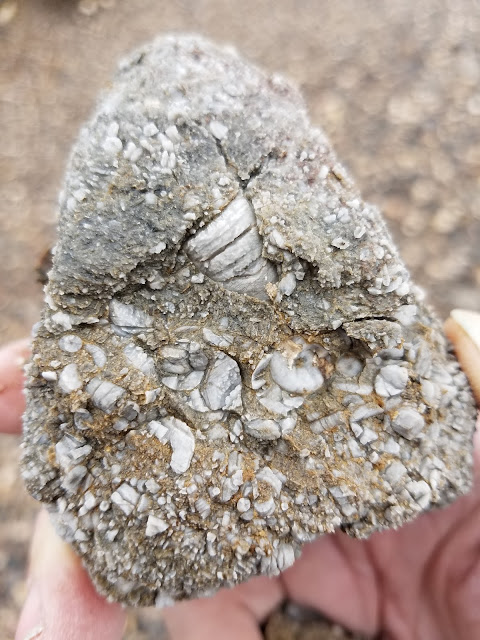 It shouldn't have be said, but we were outside of the boundaries of the national park. Collecting within the park boundaries is quite logically not allowed. We do enough damage to the resource as it is without hauling it off, to be lost to science. 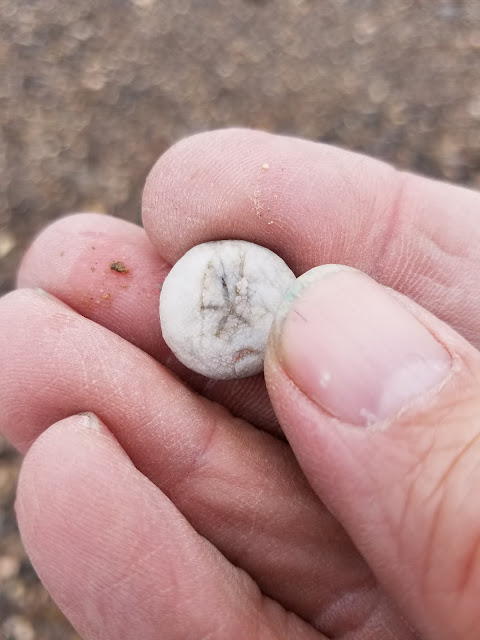 A huge number of fossils lay scattered across the desert floor. The predominant fossils were the bits and pieces of crinoid stems (sea lilies) that once covered the floor of the sea like waving fields of wheat. Even though the crinoids were anchored by roots and had stems, they were most certainly animals, specifically echinoderms. This is the animal phylum that includes starfish, sand dollars, sea biscuits, and urchins. All of these animals are related by a kind of five-fold symmetry: the five legs of the starfish, the five feeding grooves on the surface of the sand dollars. The symmetry can be seen in the "star" shape in the middle of the stem fragment (above). 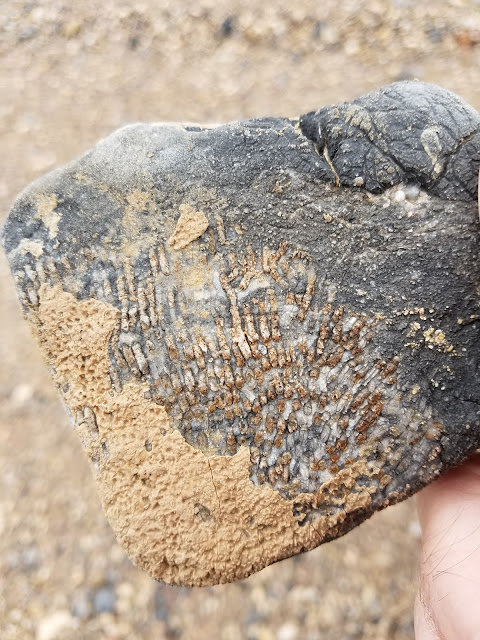 Other finds of the day included corals and brachiopods. For the students, it was the beginning of an understanding that the desert beneath their feet was truly a place where water once was, but was no longer. And with the continuing rain, it was a place where water was once again, however termporary. 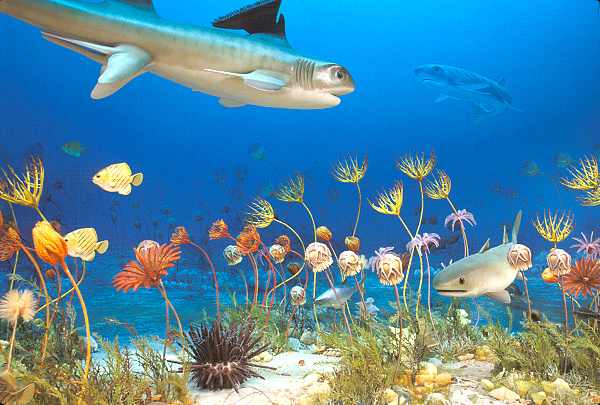 One of the challenges of taking new students into outdoor geological environments is getting them to recognize that the landscape that exists today is far different than those that came before.

That comment summarizes why I am now infatuated with geology. It's so transformative in my thinking. Thanks for your posts.