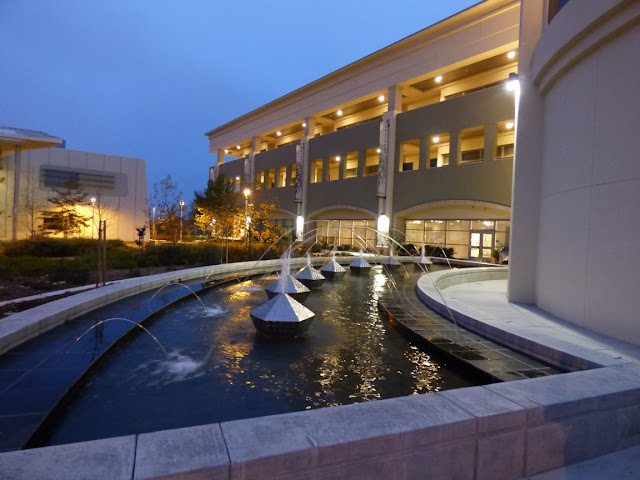 If you've read my blog for any amount of time, you know that I work in a wonderful Science Community Center, which has a the marvelous Great Valley Museum (the GVM) taking up most of the bottom floor. The museum has existed for more than thirty years, but spent most of that time in a cramped 1930's vintage house. It had been a dream for decades that the museum could grow into a larger facility, but it wasn't until about three years ago that it finally happened.

The museum is equipped with a world-class planetarium, a Science on a Sphere, a live animal exhibit, and a permanent set of exhibits on the natural history of the Great Valley. There is a nice storage facility and curation laboratory, and quite soon there will be an Outdoor Education Laboratory (you'll be hearing lots more about this part). It also has a large space for rotating exhibits, and I'm happy to report on the latest: A New Star in the Ancient Human Family: Homo naledi and Modesto Junior College's Dr. Debi Bolter. 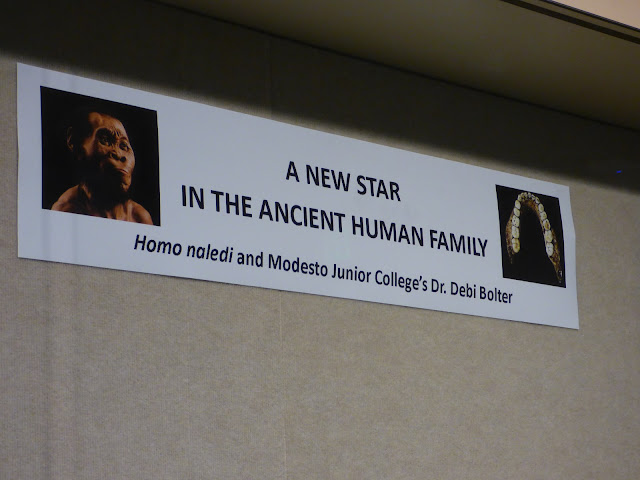 You may have heard the news about the discoveries of a new Hominin species in the Rising Star Cave in South Africa. It was in the headlines in 2014, and was a cover story in National Geographic. Fewer people may realize the close connection between the discovery and one of the anthropology professors at Modesto Junior College. Dr. Debi Bolter was part of the team who analyzed the teeth and skeletal elements found in the cave.

Denise Godbout-Avant has worked with MJC and the GVM for many years, and lately as a volunteer has been collaborating with Dr. Bolter and other professors across our campus to produce a comprehensive exhibit about the discovery of Homo naledi. I was privileged to be in attendance at a sneak preview of the exhibit this evening.
One of the unique aspects of the exhibit has been the use of some very complex 3-D printing to produce very detailed models of some of the skeletal material discovered in the Rising Star Cave. It was one of the unusual aspects of the research that the programs for the detailed scans was made available freely to other researchers. Printing these bones is a long and arduous process undertaken by MJC professors Joel Hagen and Dave Martin. Richard Avant painted and prepared the samples, while a number of MJC students assisted in other aspects of the exhibit.


The geology of the site is an important aspect of the research, as the cave is uniquely inaccessible. The bones lie in a chamber at the end of the "Superman Crawl" and the "Dragon's Back", extremely narrow passageways that make the accumulation of the bones in the particular chamber somewhat of a mystery. How did they get in there? Did they crawl in? Were they thrown into the chamber? Was there another entrance at one time or another? 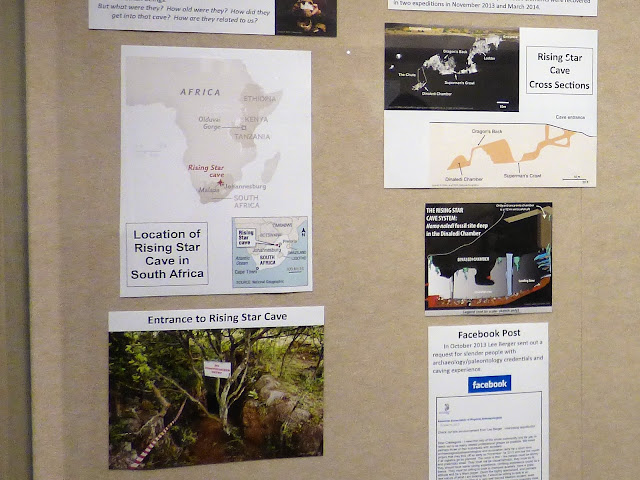 The Great Valley Museum is a scientific treasure in a region that is often lagging in scientific education. The people of our region voted to support science education when they passed a bond issue a decade ago that resulted in the construction of the Science Community Center and the expansion of the Great Valley Museum. If you have not yet had an opportunity to visit the museum and take in the exhibits and maybe even a planetarium show, now is a great time to stop by! Bring the kids, for there is plenty for them to do as well. Information on hours and location can be found on the museum website at http://www.mjc.edu/instruction/sme/gvm/index.php. Follow the GVM on Twitter at https://twitter.com/GVMatMJC

I am so thrilled to read this Garry!
DR.Debi Bolter is hands down the main reason I discovered I've been an anthropologist (amateur) my entire life! She is such a wonderful professor and she brought so much enthusiasm into every class for a subject she clearly loves and had such passion for teaching others the truth of human existence. What a wonderful way to acknowledge her contributions to this ground breaking discovery in that cave so far from Modesto. I an truly thrilled to see her work honored in our beautiful and well done exhibits at the Great Valley Museum! It's new home on West Campus has given the museum such an astonishing ability to bring young people, MJC students and visitors of all ages a true appreciation of the amazing place this was historically and still is today! Many congrats to Dr. Bolter and the museum for choosing to make this part of the education and wonder as people pass through our human history and our natural beauty here at home. ♡♡♡♡♡♡
Thank you Great Valley Museum for contributing to all who pass through your doors a better understanding of who we are as a human race.
I will be visiting directly =^D