The video is very short, but in eight seconds it shows the stupidity of bad agricultural practices in Central California, practices that have led to disaster in the past, and maybe into our immediate future as well.
I want to make it clear that I'm not condemning all farmers. The traditional small farmers were known for caring for the lands. In flat lands where winds can carry away topsoil, these people planted trees to serve as windbreaks, trees that wouldn't be mature until long after they had passed on. They were careful to prevent soil erosion by plowing with the topography, to prevent destructive runoff. They let fields lie fallow in some years to let soil recover. They were looking out for their descendants, but it was also an act of self-preservation. If they lost the land, they could literally starve. 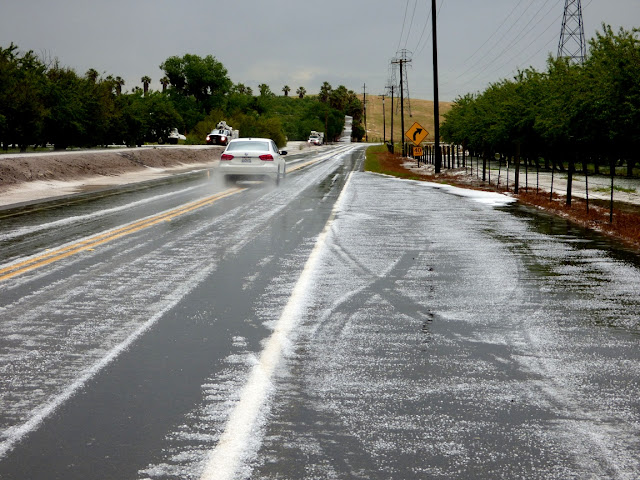 Unfortunately, it's been a long time since "small" farmers provided the economic backbone of our country. Most farming today is performed by giant agribusinesses that are more concerned with the bottom line and short-term profits. There isn't much in the way of forward thinking in a corporate boardroom.

So why is it that I'm ranting on this subject today? We had a freak storm roll through the area this afternoon. In about twenty minutes we accumulated 0.5 inches of rain, and the sky was alive with thunder and lightning. We even had a funnel cloud over our village east of Modesto (video here). The skies cleared and the storm drifted east. I decided to make a slight detour on my way to work, so I headed east on Lake Road towards Turlock Reservoir and came across a shocking scene (for our region anyway): a hail-covered landscape. 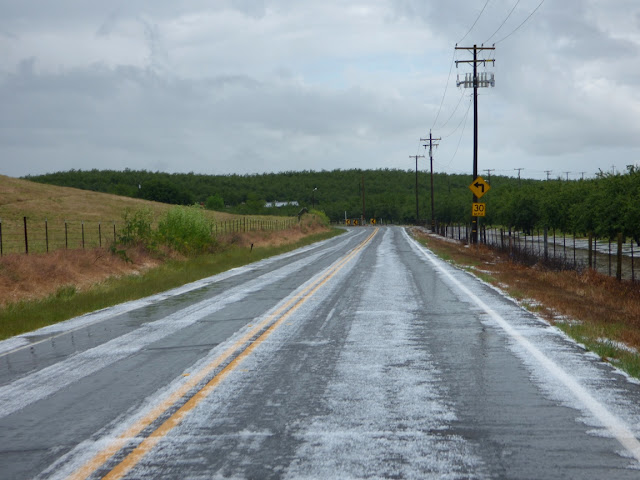 A few moments later I encountered an even bigger problem, a flooded roadway. The water was very muddy, and I could immediately see the reason. The soil was washing off the adjacent slopes. It shouldn't be happening this way. The natural landscape in this area should be a short-grass prairie, and the water should have been absorbed into the soil, and the grassroots should have been holding the soil in place. Of course a heavy rain can flood a road, but it shouldn't be bury the road in sediment. 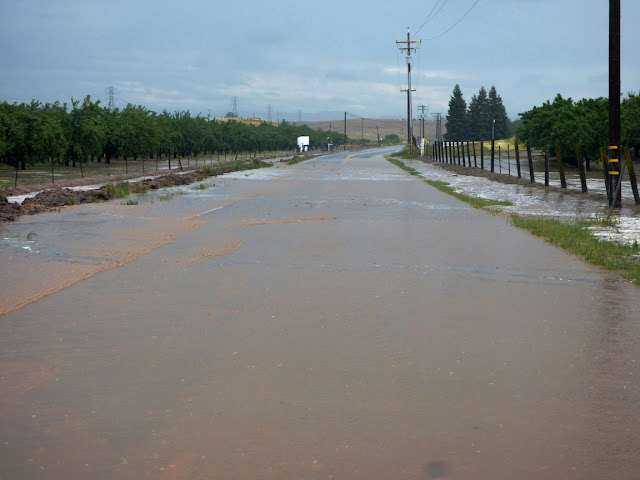 The problem is the high commodity prices for almonds due to intense demand for nuts in Asia. California produces most of the world's almonds, and for the last few years, tens of thousands of acres of grasslands have been ripped up and replaced by tree saplings. The orchards are already controversial because the trees require vast amounts of water, and there is no irrigation infrastructure to provide it in sufficient amounts. The orchards are being watered by newly drilled wells, and the water they are using is largely irreplaceable, as the water use far exceeds natural recharge. The wells are tapping into aquifers that provide water for Modesto and other cities in the Great Valley. 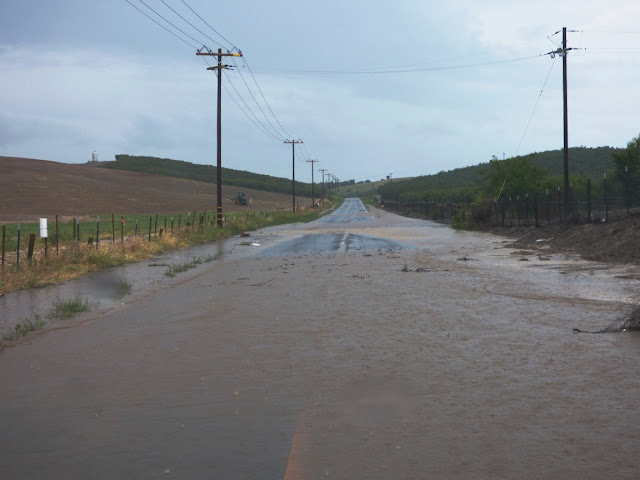 But another serious problem caught my attention this afternoon. The grass is gone, and herbicides are clearly being used to keep the soil barren in the rows between the trees. And the trees are in perfectly straight rows, no matter the shape of the topography.

In other words, these "farmers" (really investment groups) are breaking one of the most important lessons of the Dust Bowl era. To farm in a sustainable manner, one needs to work with the land, not against it. One of the main causes of soil loss in the Dust Bowl days was erosion of furrows that sloped towards the gullies and valleys because of an insistence on plowing in perfectly symmetrical rows no matter the underlying topography. 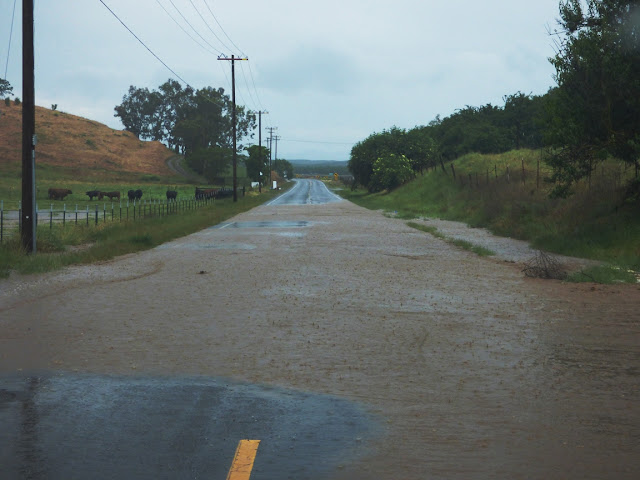 The soils of the eastern Great Valley and in the Sierra Foothills are much older and less fertile than those on the floor of the valley. They've not been replenished by river floods since the end of the last ice age some 13,000 years ago. As a result, there are fewer nutrients, and thick accumulations of clay prevent groundwater infiltration unless grass or other vegetation slows the water down. So today, with the grass cover stripped away, we are seeing increased soil erosion that seems to intensify with every storm.

The problem was made most clear as I was driving south on Hawkins Road (below). On the right side of the road, you can see the recently planted orchard, and the muddy water that is washing off the slope. In the foreground, the water on the road is clear. That's because the slope to my right was covered with prairie grass, not orchard. 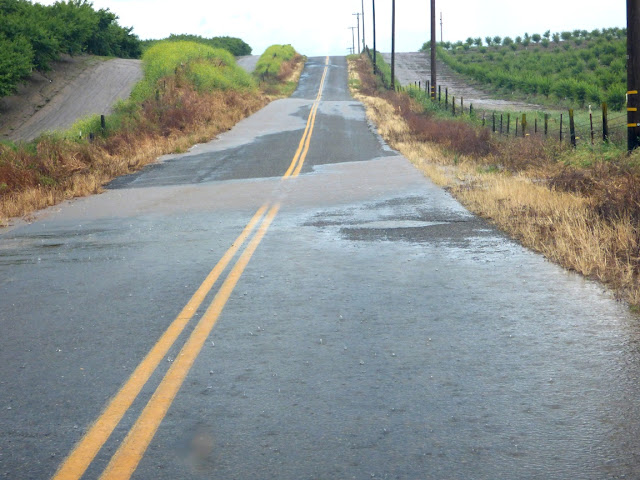 This is what we get when farming gets taken over by corporate interests. One would think that in this modern era we would take steps to prevent soil loss. Soil is life itself, and is irreplaceable in human lifetimes. But...money talks. It yells. It shouts. And the land therefore suffers.
Posted by Garry Hayes at 12:34 AM

Yes, corporate farming can cause problems. I used to live in the Monterey Bay area, and at the time strawberry farms were doing the deed there - some actually were plowed straight up and down the sandy slopes (very poorly-consolidated sandstone in the Aromas). Like your observation, the slopes (even oversteepened in roadcuts) usually held up fine with the normal vegetation (an assortment of scrubby oaks, manzanita, and grasses), but there were certain strawberry fields that simply buried the roads. It finally got bad enough in a couple of spots that the county sued the farmers for damages to help cover the cost of cleanup, but most of the soil of course was ended up in Elkhorn Slough either by washing down in the rains or by dumping after it was hauled away. Funny thing: the strawberry farmers that plowed across the slopes instead of up and down had little damage ...